There is an adage in Persian: When one is asked to die, he agrees on falling sick. This is exactly the situation with Muslims in Assam where the Assam government has decided to convert the madrasas (along with Sanskrit Tols) into regular secondary and higher secondary schools starting November. 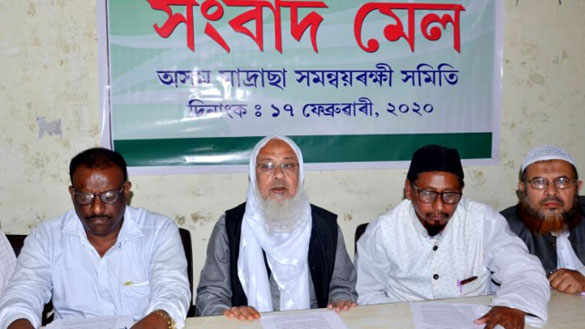 There are 614 government-aided madrasas in Assam where Islamic education is imparted. The decision has created anxiety among the Muslims in general and the Madrasa management in particular. As the time for the implementation of the decision approaches fast, madrasa circle has been giving out desperate reactions.

Most vocal is the Badruddin Ajmal led AIUDF, which has opposed the closing down of government-aided madrasas. Most of the madrasas in Assam are run by Jamiat-e-Ulema Hind ( Mahmood Madani group) with which Maulana Badruddin Ajmal is associated. Therefore, madrasas provide AIUDF its mass base and vote bank.

Now that the madrasas are going to be shut down, the religious leaders and representatives of madrasas have agreed on modernisation of madrasas. MLA Rafiqul Islam said that it was not true that madrasas imparted only religious education. General subjects are also taught in madrasas.

An imam of a mosque said, " If any change in syllabus is needed, the government can do it. Currently modern subjects like computer science is also taught in madrasas."

This is a fact that for decades, the religious leaders opposed the introduction of sciences and English in madrasas. Even if they introduced computers in madrasas on government pressure as part of the five-year plan, the madrasas did not give much importance to teaching computer science. Computers provided by the government lay unused there.

The madrasa education in Assam was started in 1780 when the British government discouraged Islamic seminaries. These madrasas were centres of pure Islamic education, which excluded sciences and English from its syllabus. Madrasas did not change or modify their syllabus with the requirements of the time and students graduating from the madrasas fell behind in the race of development. Even after the independence, the successive governments tried to modernise the madrasas, but the religious section considered the government’s efforts a conspiracy and an interference in the religious affairs of Muslims.

But now that the government has finally taken tbe decision to convert the madrasas into regular schools the religious leadership has agreed to modernisation of madrasas. But it is now too late.

Since the Muslims of Assam cannot reverse the decision of the government, they should take this decision positively and turn this crisis into an opportunity (Shar Me Khair Ka Pehlu). Muslims have always complained, and rightly so, that there is a dearth of schools and colleges in Muslim minority areas. And because of this their children cannot complete schooling. Now that the madrasas are going to be converted into schools and higher secondary schools, the minority community will get 614+ schools and higher secondary schools in their locality where their children will get modern education including computer literacy and English. The Higher secondary schools can later be upgraded to colleges, which will only contribute to the educational development of the Muslims. As for the basic religious education which is mandatory for every Muslim, it can be imparted to them at home or in private madrasas which the government does not want to disturb.

In this modern era when competition is tough and a student has to be taught all the modern subjects including English to prove his worth in the society, modern schools are the need of the Muslim community, which has dismal representation in bureaucracy and private jobs. Therefore, Muslims of Assam should turn this crisis into opportunity for the sake of the educational development of the community.