Russian Invasion of Ukraine Has Lessons for Muslim Countries

3.    Now Putin sees a re-run of Middle East civil war in his neighbourhood. 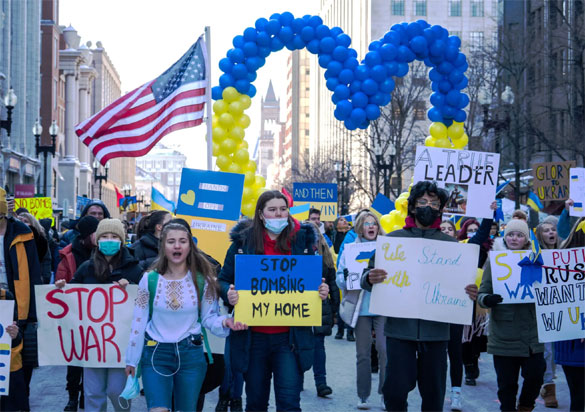 Protesters at a peace march for Ukraine in Boston on Sunday. Credit...Vanessa Leroy for The New York Times

The Russian invasion of Ukraine, an erstwhile province of the former USSR has some lessons for the Islamic world. Russia invaded Ukraine because it feared that Ukraine will also take membership of 30 member military alliance called NATO and will cause a security threat to it. Russia thought it wise to strike a regime change in Ukraine before it formally becomes a member of NATO. Therefore, it was s pre-emptive strike. The US and other NATO allies left Ukraine alone when the actual war began. Intriguingly NATO did not respond even when Russia hit the ships of Romania,. NATO member and Japan which has close ties with NATO.

NATO is a military Alliance of 30 countries of which only two, Turkey and Albania are Muslim majority countries with only Turkey having some political clout.

Prior to war the US and the other members of NATO provoked Ukraine against Russia but when Russia invaded Ukraine, the US and other powerful members of NATO backtracked and only imposed economic sanctions against Russia as they had a powerful country like Russia throwing a challenge to them. When the US did not come to the rescue of Ukraine on the basis that it was not s member of NATO, Russia put another challenge before the US by hitting Romania and Japan. Still the US did not have the courage to attack Russia. This is the same US and NATO which ravaged three Muslim majority countries in the name of war on terror.

The US first destroyed Iraq because Saddam Hussein was a big impediment to the trade and military interests of the US in the region. The US attacked Iraq on the pretext of liberating Kuwait but is silent on liberating or protecting Ukraine which is a Christian majority country. The US and NATO destroyed Iraq fully and brought a regime change in Iraq on the pretext of disarming Iraq of weapons of mass destruction. The US and UK spread the lie that Saddam Hussein had piled up weapons of mass destruction and was supporting terrorism though a UN inspection team had declared that it had found absolutely no evidence of the existence of WMDs just before the start of the invasion. Iraq was fully destroyed with the help of a lie.

Next was Afghanistan. The US and NATO attacked Afghanistan after 9/11 attacks and NATO-led UN-mandated International Security force (ISAF) was stationed in Afghanistan in order to create the conditions whereby the Afghan government could exercise its authority through the country and build the capacity of the Afghan national security forces including in the fight against international terrorists.

But after staying in. Afghanistan for two decades the US and other powerful nations surprisingly could not build the military capacity of the Afghan security forces to fight Taliban. In fact they themselves could not eliminate Taliban and had a peace agreement with them in 2020. They left the Ashraf Ghani government helpless when the Taliban captured power in Afghanistan in the same way they left Ukraine alone when Putin attacked.The US is now co-operating with Taliban government whom it earlier considered terrorists.

The next victim in line was Libya's Muammar Gaddafi who was an eyesore for the US imperialism. The US and NATO took the Arab Spring as an opportunity to bring a regime change in Libya in 2011. When the uprising reached Libya after Egypt and Tunisia, Qaddafi tried to crush the rebellion with force. In a speech he had threatened the rebels to chase the protesters from street to street, alley to alley, home to home and person to person. He had also reportedly asked his supporters to cleanse Benghazi. This gave the US and the NATO a tool to attack Libya and bring a regime change. They succeeded in getting Resolution 1973 passed in the UNSC against Libya and to implement the resolution, multi-state NATO-led coalition began military intervention in Libya on 19 March 2011 to 'protect the people ‘of Libya and to punish Gadhafi for 'crimes against Humanity' though in practice the US Defence Secretary had no confirmation of real attacks on citizens.

The NATO's claim that it invaded Libya to protect the citizens was proved false because the rebels killed black Libyans and destroyed whole villages of black Libyans and raped black women in the refugee camps. The rebels had the backing of NATO because both wanted Gadhafi out. The operation ended with complete destruction of Libya and Gadhafi’s death in October.

The US-led NATO had also wanted to destroy Syria because Bashar al Asad had close trade and military ties with arch enemy Russia but Syria survived because of strong backing of Russia. The US and UK had even tried to prove that Syria had used chemical weapons against rebels and Saudi Arabia's Intelligence Minister Bandar bin Sultan had even visited Putin to persuade him to remain neutral but Putin threatened to attack Saudi Arabia if the US had attacked Syria. This serve as a deterrent and Syria wash saved.

Before the NATO attack on Iraq in March 2003, 3 million people had protested against war in February and 36 million people worldwide had organised 3000 protests against American war mongering but it did not listen and destroyed Iraq and killed Saddam.

Now as the world media is in the hands of the western countries a media blitzkrieg will be launched against Putin and he will be portrayed as Dracula, demon and famous personalities, sportspersons, actors, politicians who remained silent during the NATO game of death and destruction in Middle East will condemn Russian barbarism. and the US and the NATO members who killed millions of innocent people in Afghanistan, Iraq and Libya and supported the terrorist outfit ISIS whom Putin called 'liver eaters', when Obama had met Putin to seek his support to them against Bashar Al Assad, will be portrayed as flagbearers of peace.