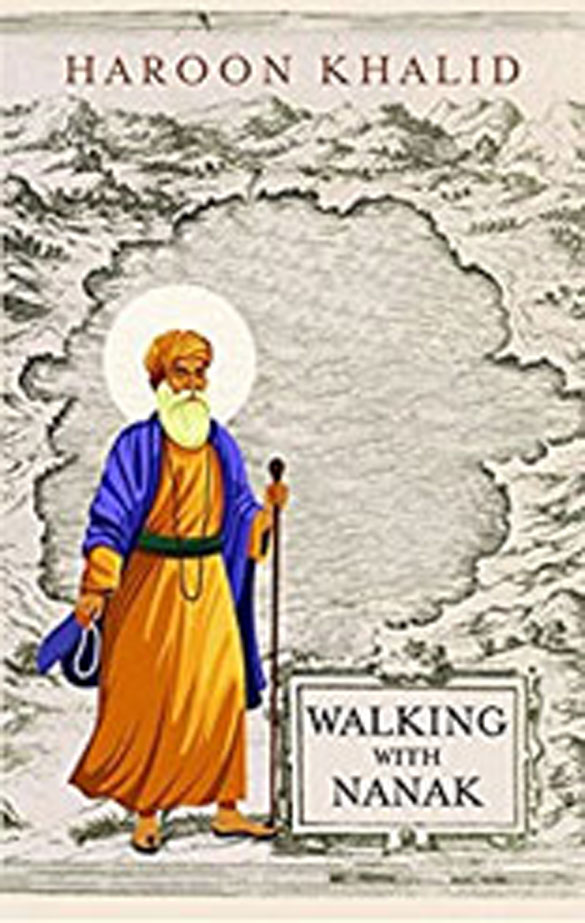 Islamabad-based academic and journalist Haroon Khalid has one particular passion—highlighting little-known aspects of Pakistan’s pre-Islamic past and the present concerns and plight of the country’s marginalized religious minorities, issues about which he discusses in detail in his A White Trail:  Journey into the Heart of Pakistan’s Religious Minorities and in his In Search of Shiva: A study of Folk Religious Practices in Pakistan. In this latest book of his, Khalid provides us valuable insights about the rich historical heritage of the Sikh tradition in what is now Pakistan.

Guru Nanak (1469-1539) was born in what is today the Pakistani part of Punjab, and he passed away there, too. Along with his close disciple Bhai Mardana, he travelled widely, in the Punjab and far beyond, preaching the message that he had been commissioned by God to convey. In Walking With Nanak, Khalid takes his readers on a long journey to various places across Pakistan—in present-day Pakistani Punjab as well as in the southern Sindh province—that are associated with Guru Nanak, where, over the centuries, Sikh devotees established Gurudwaras or Sikh shrines in his memory.

As readers accompany Khalid on his travels, to cities and interior villages in Pakistan, from one Gurudwara to another, Khalid narrates incidents from the life of Guru Nanak as well as from the Gurus after him whom the Sikhs revere, highlighting key aspects of their life and teachings. In the process, we learn about Guru Nanak’s devotion to God and his message of social equality. About his mission to unite people who claimed to follow different faiths in common devotion to the One God, because of which many Hindus and Muslims came to accept him as a true man of God. About his teachings about the meaninglessness of narrowly-inscribed religious labels and identities that hinder one from realizing God.  About his critique of supremacism, bigotry, exclusivism, communalism, priest craft, caste and caste-based discrimination and superstition in the name of religion. About his insistence that mere rituals or belief in dogmas are utterly insufficient for salvation. About his love for the poor and the humble. About his stress on the remembrance of God, the ephemeral nature of this world and the need to abstain from allowing ourselves to be drowned in worldly concerns and desires. About his message of an ethical life rooted in God-consciousness. We learn, in short, about a message of continuing relevance, in our times too, five centuries or so after Guru Nanak, for all the issues that the Guru talked about still remains with us today.

Khalid has an academic background in Anthropology and has a deep understanding of various religious traditions. He combines these with a love for travel and adventure to produce a fascinating account of the rich Sikh heritage of a region that is now part of Pakistan. Not very long ago, this area was home to a large Sikh population. But with the Partition, most Sikhs were compelled to migrate to India, while many others were (like vast numbers of Hindus and Muslims) killed in communal frenzy. They left behind in what became Muslim-majority Pakistan scores of Gurudwaras and a very small Sikh population. Khalid provides us with a detailed account of the stories of why these Gurudwaras had come to be established as well as of their present conditions. Many of them, we learn, are now crumbling ruins; some have been converted into schools; others have been occupied by refugees from India and have been turned into homes. Some have been ‘Islamised’ into Muslim-like shrines. At the same time, some continue to function as Gurudwaras. Along with this, describing his interactions with some Sikhs he gets to meet during his journeys, Khalid provides us with rich insights into what it means to be a Sikh in Pakistan today.

This book is the result of obviously much hard work, and also of great love. Given the clout of extremists who claim to speak in the name of Islam in Pakistan today, as well as the widespread discrimination that non-Muslim Pakistanis face (which numerous self-styled ‘Islamic’ groups and the Pakistani state have deliberately promoted), doing the sort of work that Khalid does—celebrating Pakistan’s non-Muslim traditions and history, highlighting the concerns of its religious minorities and calling for inter community harmony—is certainly no easy task.

Khalid has had to face criticism even from some close relatives for his work. He says he has been “labelled a Sikh or biased against Muslims” because of his “fascination with Guru Nanak.” “Often,” he relates, “my family members, my students and my friends say in a derogatory manner that I am a Hindu or a Sikh, implying that I was somehow inferior to them. My mother and sisters have told me several times to write about Muslim saints and buildings instead of our Sikh or Hindu heritage. In a country where everyone is researching Islam, it seems there is no space to do any research outside the fold of Islam.”

Some readers may differ with Khalid on some of his views on certain aspects of Sikh history, but still, they would definitely agree that Khalid’s love for Guru Nanak and his passion for promoting peace, harmony and respect for religious pluralism are truly admirable, which makes his book all the more worthy.