A'la Hazrat is known for his polemics against the pioneers of the Deobandī school of thought on various issues concerning the association of some attributes to the Prophet Muhammad. Some of these issues include the possession of the knowledge of the unseen, the celebration of mawlid and visiting shrines, which the Deobandīs deemed as heretical innovations.

·         It contends that the use of the word ‘Syncretic’ is theoretically incorrect to categorize orthodox Islam.

·         This essay also points out some of the historical inaccuracies that are present in the book. 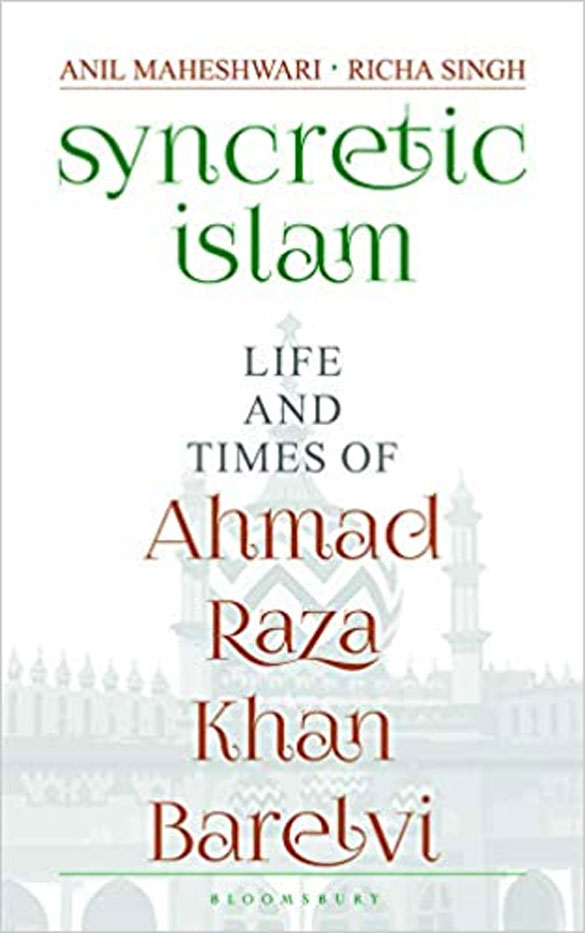 With its recurrent yet dynamic expressions, religion has managed to captivate philosophers, thinkers, and scholars for centuries. With time it mutates, adapts, and thus constantly requires a fresh reading of the developments that are taking place in it. A religion, in this case, Islam, is layered with history, tradition, and contestations which all contribute to its complex structure. Any simplification of a religion like Islam would be an injustice to it. Therefore, to unravel the mysteries of a complex phenomenon like Islam, one needs to have a robust understanding of its history, how its legal and ethical apparatus operate, and how it determines normativity from heresy in unique situations. A study of Islam or Islamic thoughts that overlooks such conditions is a ruse in the name of scholarship. Syncretic Islam Life and Times of Ahmad Raza Khan Barelvi (2021) co-authored by Anil Maheshwari and Richa Singh and published by Bloomsbury is an example of such scholarship.

As the title of the book suggests, it deals with the life and thoughts of one of the most influential scholars of Islam in the modern world, Ahmad Raza Khan Barelvi (d.1921), also known as AlāHazratto his followers. Ahmad Raza was a jurist-theologian, and a prolific writer. He is known for his polemics against the pioneers of the Deobandī school of thought on various issues concerning the association of some attributes to the Prophet Muhammad. Some of these issues include the possession of the knowledge of the unseen, the celebration of mawlid and visiting shrines, which the Deobandīs deemed as heretical innovations. However, despite these differences, both groups remained adherents to the classical Islamic creed, Maturīdism, and the Hanafi jurisprudential school. Nevertheless, the authors, Maheshwari and Singh, have claimed that the Deobandīs and Barelvīs emerged as the sub-groups of fiqh/jurisprudence within the Hanafi school (4-5), which is wrong and misleading.

Firstly, I would like to point out the usage of the word, ‘Syncretic,’ in the title of the book. By this word the authors imply an Islam infused with Hindu practices, whose followers venerated Muslim saints like Hindu gods (3). Religious syncretism is defined as a fusion of beliefs and practices of one religion to another to an extent that the syncretic version diverges from the core belief system of the parent religion. This would further imply: first, visiting shrines or celebrating mawlid, and other practices related to Sufism and the thoughts of Ahmad Raza are the expressions of syncretism, and by definition a divergent version of Islam; and second, Ahmad Raza defended this syncretic version of Islam. Furthermore, labeling Sufism and other practices that Ahmad Raza endorsed as syncretic is tantamount to discredit them as normative, and an offense to a traditional/orthodox scholar such as Ahmad Raza himself. Contrary to Maheshwari and Singh, Sufism existed for centuries as a normative part of Islam until the modern period when its normative status was challenged by the Muslim modernist and puritanical hermeneutics.

The authors’ usage of the term ‘Syncretic’ without any reservation exhibits their ignorance of how Islamic tradition has evolved throughout its history. Islamic normativity is modelled after the Sunnah of the Prophet Muhammad and his companions and is also defined by the collective practices of Muslims in the past. The normative space of Islam can be divided into two parts: creeds and practices. Islam has always allowed innovation and creativity in practices, however, there has also been a check on the heretical innovations. While Sufis and ‘ulamā appreciated and endorsed many practices, like mawlid and visiting shrines as virtuous innovations, they also decried heretic innovations that had crept into Sufism. For example, Sheikh Ali Hujwiri (d.1077), a renowned Sufi and the author of the first Persian book on Sufism, Kashf al-Mahjūb, denounced unorthodox Sufis. Ahmad Raza himself, whose interpretations of Islam the authors have characterized as syncretic, have condemned many practices that have become part of visiting shrines, commemorating ‘urs, celebrating mawlid etc. as heretic in his fatwās. Interestingly, the authors have mentioned those of his writings in Chapter 8 of the book without noticing the contradiction of their claim. So, one might ask, what were the Deobandīs and Barelvīs debating about? In 19th century India, a newMuslim reformist hermeneutics was introduced arguing that all innovations were heretic and tried to formulate a normativity modelled only after the Sunnah of the Prophet Muhammad and disqualified innovationsthat were introduced after the Prophet and considered normative until 18th century. Ahmad Raza’s struggle against Deobandīs was for upholding the normative character of the practices which had been part of Islamic orthodoxy until 18th century, and which is aptly termed by Usha Sanyal as ‘devotional.’ For a deep analysis of bida’/innovation and normativity in the context of Deobandī-Barelvī debate, one should refer toSherAli Tareen’s Defending Muhammad in Modernity (2020).

Syncretic Islam contains 246 pages, which are divided into an introduction and a conclusion along with eleven chapters and five appendices. However, the authors have given only 40 references for direct quotations throughout the book. While reading the book, I realized that the authors have not given due credit to the ideas they have borrowed from previous researches on the subject in their book. It seems that they have not followed the proper guidelines of academic writing. Usha Sanyal was perhaps the first scholar who did research on the life and thoughts of Ahmad Raza Khan in English. Her research was published as Devotional Islam and Politics in British India (New Edition, 2010, Yoda Press). Since the authors rarely state their sources, many interventions and insights that they introduce in the biography of Ahmad Raza, like why Ahmad Raza’s ancestors abandon the old family profession of military and join the ‘ulamā class? etc., seem to be the efforts of their own reading and research. However, I found that many such interventions were originally made by Sanyal which the authors borrowed and incorporated in Syncretic Islam without acknowledging the source.There are also some paragraphs which Maheshwari and Singh did not even bother to paraphrase. A paragraphin Syncretic Islam is an exact copy with minor alterations of a paragraph on pages 54-55in Devotional Islam (22). Also, there are two entire paragraphs which the authors have plagiarized from SherAli Tareen’s book, Defending Muhammad in Modernity and concluded their book with them. There is no need to say that such an exercise is surprising and unethical.

The book has also suffered from a series of inaccurate historical claims. One such claim is to present Ahmad Raza as someone who had developed a distant but cordial relationship with the British officials, again without providing any proof to substantiate this claim. (67) According to the book, Ahmad Raza became pro-British in his youth and remained so in his entire life. There is no evidence to the claim that Ahmad Raza established a friendly relationship with the British in his youth. Ahmad Raza was accused for the first time of being a British sympathizer during the last years of his life due to opposing anti-British movements such as the Khilafat, Hijrat, and Non-Cooperation Movements. However, Ahmad Raza’s opposition to these movements were solely based on his reading of Islamic law.Because the leaders of these movements were using Islam to mobilize the support of Muslims,and he did not wish to manipulate religion to acquire political gain. Ahmad Raza addressed the accusations and tried to vindicate himself by explaining the reasons for his opposition. Sanyal has devoted a full chapter to address whether Ahmad Raza was pro-British in chapter nine of her book. She concludes her analyses with the statement: “Ahmad Raza was uninterested in the nationalist movement and the question of political self-determination as long as Muslims were free to practice their faith unhindered” (297 in Devotional Islam). Maheshwari and Singh has copied the same sentences to make that point (76). But again, it contradicts their own claim, leaving their readers confused (67).

There are also instances in the book that demonstrate the poor understanding of the authors of Islamic history and thought in general. They mixed Shah Ismail (d. 1831)with Deobandī ‘ulamā which is anachronistic since the madrasa at Deobandwas established more than three decades after the death of Shah Ismail (115). Similarly, the book credits one of the most debated epistles, Hifzul ‘Īmān, to Qasim Nanotvi (120). However, the epistle was written by Ashraf Ali Thanvī, one of the pioneers of Deobandī thoughts.Finally, the book claims that the Deobandīs believe that God can send another prophet after Muhammad, a claim completely against the precepts of their thought (130). Believing Muhammad to be the final prophet is one of the fundamentals of faith for both Barelvis and Deobandīs. One should note that the polemics of both Deobandīs and Barelvīsagainst the Ahmadīs is premised on precisely the claimthat there could be prophecy after the prophethood of Muhammad.

Aside from these grave errors—I have mentioned a few here—the book is poorly written and feeds misinformation and confusion to its readers. The text is highly problematic, and I am shocked that it is published by Bloomsbury. The Deobandī-Barelvī debate has influenced the modern history of Muslims, especially in South Asia. The debate between the group was exchanged in highly technical terms of theology and fiqh, which the authors have simplified. Not only this simplification does not do any justice to the topic, but it also shows as if the topic does not deserve serious efforts. For people interested in the subject, I would suggest that they should refer to other serious scholars, like Qasim Zaman, Usha Sanyal, SherAli Tareen, Barbara Metcalf, and other authentic scholars who have done serious research on the history of Barelvīs and Deobandīs and their thoughts.

Mohammad Ali has been a madrasa student. He has also participated in a three years program of the "Madrasa Discourses,"  a program for madrasa graduates initiated by the University of Notre Dame, USA. Currently, he is a PhD Scholar at the Department of Islamic Studies, Jamia Millia Islamia, New Delhi. His areas of interest include Muslim intellectual history, Muslim philosophy, Ilm-al-Kalam, Muslim sectarian conflicts, madrasa discourses.