Uproar in Urdu Media: Denigration of Prophet Muhammad by a Delhi Publisher

On numerous occasions blasphemous acts have been performed and toughest possible actions have been taken by Muslims in all such cases. In this series of events Danish cartoonist has been the latest who had sketched an imaginary cartoon of Prophet Muhammad (SAW), which had attracted worldwide condemnations from every section of society. 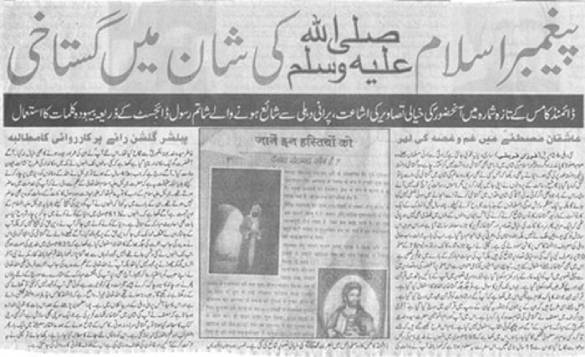 Everybody knows, these kinds of activities are not forgiven by the followers of Islam and the blasphemers are either killed or the followers of Rasool (SAW) sacrifice their lives for maintaining the Prophet’s dignity. Even after so many incidents of such nature if somebody does the same thing, it will not be taken as a mistake committed unconsciously. These things are consciously done to fire up the passions of the followers of Prophet (SAW).

Such an incident has come in to light and this time it has not happened in any European country rather it has been done in India by a well known publication “Diamond Comics Samooh” in New Delhi. In its latest Comic World Volume 78 on Page no. 70 it has published two imaginary photos of Prophet (SAW). The words used to describe Prophet’s life, most of them imaginary or without any scholarly investigation, are in themselves highly disrespectful and blasphemous.  The phrase “ran away” has been used for ‘migration’. It further says, Prophet Muhammad (SAW) was called to preach the message of God by Jibreel (Gabriel) (AS) when the truth is that Hazrat Jibreel (AS) did not even use to enter his house without permission and Prophet(SAW) had not gone anywhere taking the message of God but his followers had travelled to far and near countries. No Respectful words have been used before and after the names of Prophet Muhammad (SAW) and Hazrat Khadija (RA). Their names have been used as that of any common person.

The said Comics writes, prophet (SAW) married Hazrat Khadija (RA) who was 15 years older to him, a widow and a businesswoman. This has been described in such a way as to give an impression that the marriage was solemnized only because Hazrat Khadija (RA) was a wealthy woman hence Prophet (SAW) did not bother for her being a widow and older to Him. It is very easy to come to the conclusion that the whole article has been published with a view to defaming Rasool (SAW). Had the writer studied any religious book on the topic this blasphemous act would not have been committed.

The editor and publisher of the said Comics is Mr. Gulshan Rai and its Head office is in Dareeba Kalan, Old Delhi.