Last week, tens of thousands of men—this was a strictly all-male gathering—descended on the town of Deoband in Uttar Pradesh’s Saharanpur district to attend the 30th annual convention of the Jamiat Ulema-I-Hind, a leading body of Muslim clerics of the ultra-conservative Deobandi sect. Sources claimed that the gathering numbered over five hundred thousand, brought in from across India. Impassable crowds clogged the narrow, dusty pathways leading to the venue of the rally, and so, although I had travelled all the way from Bangalore to report on the event, I had to content myself by listening to the speeches relayed by loudspeakers while sitting a mile away, in the portals of the Darul Uloom, possibly the world’s largest madrasa and the nerve-centre of the Deobandi movement. 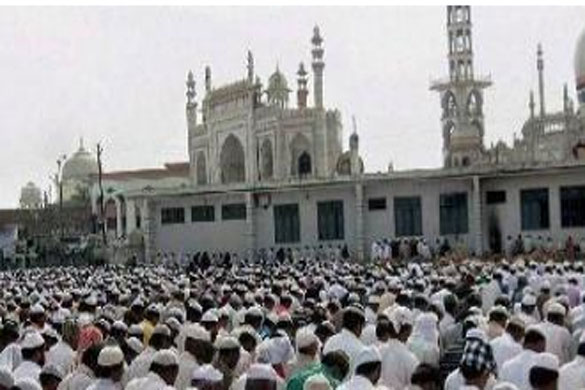 The event commenced with a maulvi reciting an Urdu poem extolling the sacrifices of the ulema of the Jamiat in India’s freedom struggle. ‘Were it not for us’, he burst forth, ‘you’—by which he probably meant the Hindus of India—‘would still be labouring under the yoke of the British.’ ‘We stiffly opposed the creation of Pakistan. We have sacrificed our lives for the country. We condemn all forms of terror. We love our India, whether or not you believe this’, he went on. The men sitting around me—dressed, like the rest of the crowd, in white kurta-pyjama, and sporting unkempt beards and white skull-caps—enthusiastically shook their heads in agreement. Like the maulvi-poet, they laboured under the burden of being forced to prove their patriotism, their anti-Pakistani credentials, and their opposition to terrorism—an unenviable predicament they were compelled to share with the rest of their co-religionists at a time of heightened Islamophobia the world over.

More than the speeches delivered at the rally it was the response of some of those who attended the event, including a number of students and graduates of the Darul Uloom, that interested me. And, among these, it were the cynics who impressed me the most. ‘This is just a political stunt orchestrated by the self-styled head of the Jamiat, Maulana Mahmud Madani’, said Akram, a peasant from a village near Saharanpur. ‘The rally is simply a show of strength, to impress upon the Congress his claim to be the leader of the Muslims, and to curry favour with Congress bosses’.

Akram spoke of murky goings-on within the Jamiat. ‘These selfish mullahs can never agree, though they keep harping on Muslim unity. They love nothing more than fighting among themselves.’ The Jamiat had split into several rival groups, he explained. One was led by the recently deceased Maulana Fuzail. The other two were headed by Maulana Arshad Madani and his nephew, Maulana Mahmud Madani, respectively. Maulana Arshad had recently organized an anti-terrorism conference, which had invited much media attention. Not to be outdone, Akram explained, Mahmud, who had emerged as his principal rival, had now arranged for this mammoth rally. ‘A petty game of one-upmanship’, Akram remarked. Mahmud’s branch of the Jamiat, he claimed, had splurged vast sums of money for this purpose, subsidizing train fares to the men who had been brought in, lured by the prospect of a free holiday in Deoband and free chicken biryani - ‘neither of which’, Akram joked, ‘a true Deobandi could ever refuse’. ‘How can these mullahs unite the Muslims and speak for us, when they cannot even unite among themselves?’, he angrily spluttered.

‘You won’t spot a single modern-educated Muslim in this huge carnival’, said Faisal, the owner of a bookshop located adjacent to the Darul Uloom. ‘The maulvis shun them, not just because they don’t find them religious enough but also because they fear that they will challenge their hegemony’. He indicated the crowd surging past his shop. Their features, dress and mannerisms all revealed, he said, that they were all poor peasants, madrasa teachers or maulvis. ‘The maulvis have little or no understanding of the modern world, so how can they provide us Muslims with proper leadership?’, he continued. ‘But because the Muslim middle class remains indifferent to community issues, engrossed in their pursuit of material acquisition or simply too scared to speak out against the mullahs’ obscurantist views, the mullahs’ hold on the community continues unchallenged’. ‘That’s why lakhs of Muslims have so easily been mobilized by the Jamiat for this mela’.

Bilal, a student of the Darul Uloom, decried the opposition of the Jamiat leaders to madrasa reforms, which was reflected in the resolution they passed at the conclusion of the conference decrying the suggestion that the Government set up a national madrasa board. ‘These politically influential maulvis send their sons to modern schools and even abroad, but they won’t let us madrasa students, most of who come from very poor families, learn anything about the modern world. They want us to remain ignorant so that they can continue to play politics in our name.’ He pointed to an open drain that ran along the wall outside the madrasa, clogged with grey water, plastic bags and blobs of fresh human refuse, out of which emerged an overpowering, nauseous sulphurous stench. Ahead, built into the outside wall of a mosque, a door-less toilet was littered with excrement that spilled out onto the street. ‘According to a saying attributed to the Prophet, cleanliness is half of faith. And so, as you can see, here half our faith is in the gutters!’

Bilal took me around the hostels of the madrasa, into dark, dingy airless rooms, each shared by more than half a dozen students. Cobwebs hung like thick curtains in corners, and the floors were strewn with filth. The scenario was even more pathetic at the nearby Darul Uloom Waqf, a madrasa set up by a rival group of Deobandi maulvis in the wake of a coup engineered by the Madani family that forcibly ousted the then rector of the Deoband madrasa, Maulana Qari Tayyeb, in 1980. Vegetable peels and waste daal and rice law thrown around in large puddles outside the students’ rooms, under vast armies of flies. ‘The maulvis here, who never tire of claiming to be heirs of the Prophet, simply don’t care about all this. All they hanker after is power and fame’, Bilal rued.

The next morning’s newspapers gave wide coverage to the Deoband rally, focusing particularly on one of the many resolutions that the Jamiat had passed—its opposition to the compulsory singing of the Vande Mataram song. Rizwan, a graduate of the Dar ul-Ulum, now teaching in a Deobandi madrasa in Agra, summed up what seemed to be a widely-shared feeling among the participants at the rally. ‘We love India, but it is ridiculous to demand that our loyalty be tested on the basis of our attitude to this song.’ The song, originally contained in a book that openly spewed hatred against Muslims, had generated a major stir even in pre-independence days, he explained. It was also, he pointed out, unacceptable not just to Muslims but to other monotheists, for it spoke of the worship of the motherland as a deity. At the same time, he added, there was simply no need for the Jamiat to have raked up the issue that had been lying dormant for years. ‘It’s probably a deliberate tactic of Maulana Mahmud and his cronies to leap into the limelight by igniting a controversy and then presenting themselves as leaders of the Muslims’, he mused.

Rizwan was equally critical of the media coverage of the rally. ‘The media has pounced on the Vande Mataram issue, conveniently ignoring the other resolutions passed at the rally—the Jamiat’s condemnation of terrorism, its demand for the implementation of the recommendations of the Sachar Committee report, its call for combating communalism and providing security to Muslims and so on’. ‘Like our self-styled leaders behind this Jamiat-sponsored drama’, he added ‘the media, too, is simply not interested in the welfare of the Muslim masses. They both revel in stirring wholly avoidable controversies, while it is the hapless Muslim masses who continue to suffer, and whose voices continue to go unheard.’

URL of this Page: https://www.newageislam.com/the-war-within-islam/drama-at-deoband--spurious-claims-of-indian-muslim-leadership/d/2079