General Ashfaq Pervaiz Kiani, Pakistan’s two-term army chief (2007-2013) and a leading defence and strategic thinker used to often justify his institution’s support to Imran Khan and his party, the Pakistan Tehreek e Insaf, on the grounds that as a politician Khan was central to blunting the country’s swing to the extreme right and limiting the expanding clout of religio-political parties, or, more precisely, their problematic Taliban versions. 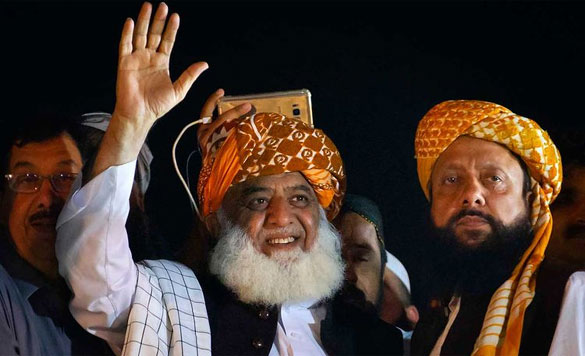 There is sweet irony in the fact that it is on Imran Khan’s watch that the head of Jamaiat-Ulema-Islam (JUI for short) that commands one of the largest madrasa (religious) schools networks in Pakistan has now become the consensus head of the newly formed anti-government Pakistan Democratic Movement, which represents more than 60 per cent of the national voters.

To be sure, Maulana Fazlur Rehman is not a new entrant to politics. He is an old hand at the game, who has successfully fought elections many times, and whose father, a leading politician, was signatory to the 1973 Constitution. His party represents a tradition of the 19th-century religion-based politics known as the Deobandi Tehreek. Named after the place where it was founded in undivided India, the powerful Deoband movement started during the British rule of the subcontinent as a Sunni revivalist effort against “perversion of pure Islam by the foreign rulers and their local supporters”. It soon grew into a resilient and potent threat to the colonialists.

Also, a regional religious leader heading a coalition comprising much-bigger national parties is not new either. What is exceptional is how quickly Imran Khan’s party has lost its appeal to the religious conservatives, who only three years ago were abandoning their traditional platforms and joining the PTI in droves enamoured by its anti-western and publicised Islamist leanings. While Fazulr Rehman’s party cadres remained steadfast in their opposition to Khan, his ideological brothers like the Jamat-e-Islami and a few others were politically pauperised by the exodus from their ranks.

For a while it looked as if the General Kiani formula of backing Khan as a dyke against the spread of hard-line religious parties was working as his party on the eve of the 2018 elections took great pride in making the “beard coexist with the blondes” — a slang reference to PTI’s vote-bank across the conservative and liberal sections of society. Khan’s extravagant displays of public religiosity (prayer beads, prayer-mat pictures) and his out-of-turn, cliched and at times scandalously incorrect pontifications about religious morality also came in handy as a propaganda tool in this regard.

But the idea of a muscular centrist-nationalist steeped in traditional values leading the Islamic Republic of Pakistan seems to be coming unstuck. The Opposition coalition that Maulana Fazl now heads wants to see the back of Khan for many reasons including their stand that he has ruined national economy. Casting the Maulana in the lead role is therefore smart tactics. His base is in the rural areas of the country’s poverty-stricken provinces or deprived constituencies in Balochistan and the KP. He commands considerable influence in the small towns and urban pockets of the more developed cities. His party’s ideological links spread beyond class and clan lines. Over the past one year or so its spokespersons have tried to connect with rising public anger over economic and governance deterioration through their acerbic attacks against the Imran government.

The party even launched a sizeable march on the capital last year but abandoned it after members of the ‘Establishment’ reportedly convinced them through interlocutors that some of their demands would be addressed including perhaps formation of a national government and fresh elections. The Opposition now thinks that the Maulana’s party can be instrumental in mobilising the far-flung areas because life has become particularly hard for ordinary Pakistanis. A survey released two days ago captured the depressed spirits of the times: 4 in every 5 Pakistanis interviewed said the country was headed in the wrong direction; 3 out of 4 said the economic situation was bad.

But the real reason the JUI now leads PDM is the fact that at present it is the only party that can summon numbers on the streets and talk straight to the military brass backing the Imran government. In one of the toughest messages to the formidable Establishment — now largely in control of the reigns of actual power as prime minister Imran dwindles in relevance — Maulana used the provocative imagery of the Americans situation in Afghanistan to warn of violence and conflict in Pakistan if the present political persecution in the name of accountability continued. With him in charge of the anti-alliance, it is likely that he would translate some of his hard words into actions and would steer his colleagues in the same direction.

In toe is the Pakistan Muslim League-N whose head, Nawaz Sharif broke his silence with a bang through a series of digital appearances from London addressing his party leaders. Almost apocalyptic in tone, he spoke of the do-or-die struggle for the supremacy of the constitution. In not-so-veiled references to the army chief General Qamar Bajwa and the Director General of the ISI, General Faiz Hameed, he explained all the national political woes on account of the generals’ interference in politics.

His party has already banned all meetings with the army leaders and intelligence heads without his approval after news broke out that General Bajwa had called a constitutionally-questionable huddle with members of the parliament, and reportedly read them the riot act on their actions to destabilise the system (read Imran government).

Since then a full-fledged media campaign has started accusing Sharif of being an “Indian agent”. Minister after minster has decried his attempts to “malign the army” on “behalf of Indian prime minister.” The courts have toughened their position on his absence from Pakistan, earlier allowed by the government on medical grounds, and have started the proceedings to formally declare him an absconder.

The media regulatory authority, PEMRA, has put all media houses on notice about airing his speeches using the plea that absconders from the law do not deserve full legal rights. Another court has started to consider the possibility of confiscating his businesses and personal properties and of freezing his bank accounts. The Imran government and his backers, it is now clear, want to teach Sharif an abiding lesson.

But Maulana Fazlur Rehman remains an exception to the government’s policy of choking its opponents into silence. While Khan’s spokespersons pour occasional scorn on Maulana, he by and large remains unscathed by otherwise hyperactive arm-twisting legal and administrative machine that the government manages. And this is not because of any love for the man.

They all hate him guts, and he returns the compliment with interest. It is because they know that he commands religious zeal and appeal of his disciples who can fill the streets at a call and also stare down the barrel of the gun. Pitting state institutions against religious parties that hold sway over enthused political constituencies has always been considered a nightmare scenario for the ‘Establishment’. Maulana Fazlur Rehman confronts them exactly the same challenge they want to avoid.

Syed Talat Hussain is a prominent Pakistani journalist and writer.