Egypt’s Elections and the Rule of God 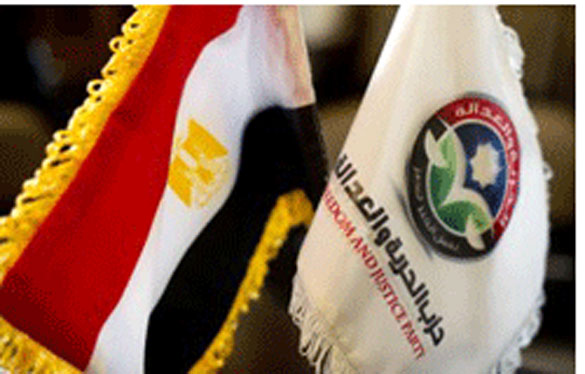 An Egyptian flag is placed next to the flag of the Freedom and Justice Party, founded by the Muslim Brotherhood, at the party headquarters in Cairo on November 30, 2011. (Odd Anderson- AFP)

In Egypt, the ultra-conservative Salafis, who believe that Sharia should be imposed on every aspect of Egyptian life, won about 25 percent of the vote in the initial parliamentary election last month. The Muslim Brotherhood, which only believes that Sharia should govern some aspects of everyday life and influence some aspects of government policy, won 40 percent of the vote with its Freedom and Justice Party. Add up the numbers: Nearly two-thirds of Egyptian voters at this time want Islam to play a bigger role in government and one-fourth voted for a party that stands for the most retrograde form of their religion. The more secular political parties lagged far behind and are expected to do even more poorly in the next round of elections, to be held later this month in less-educated rural areas.

The Muslim Brotherhood will have to strike deals with either the more extreme Salafis or with the minority secular parties if the prevailing de facto military rule is to be replaced with a working alternative. It seems highly unlikely that the Brotherhood would ever ally itself with secular parties, since it has already campaigned with the Salafis in some conservative areas and has refused to contest seats in districts where the Islamic vote might be split and allow a secular candidate to win.

It should not, however, be surprising news for anyone but the most starry-eyed western multiculturalists, who seem incapable of admitting that religion-based nationalism, which has never been an ally of human rights for anyone but adherents to its own religion, was one important element the in the Arab spring. One of the ironies of American political discourse on this subject is that it encompasses both the willful refusal of many politically liberal multiculturalists to condemn even the most fanatical forms of religion in other cultures and the view of many on the political right that the United States ought to have a Christian government (because that’s what the right thinks the founders wanted) and that only Islamic entanglement with government is bad.

The Salafis in Egypt want all of the Antediluvian, freedom-quenching measures that their counterparts in Islamic theocracies do: the exclusion of women from political life, severe religious penalties for fornication, stoning for adultery. Sheik Abdel Moneim el-Shahat, leader of the Salafis, has repeatedly criticized the Muslim Brotherhood for talking about citizenship and freedom that are not based on Islamic law.

Now there’s the problem, and not only in the Muslim world. Freedom and justice and “all that” are vitiated by government-enforced religious values.

Yet the Muslim Brotherhood, as a recent article in The New York Times pointed out, is in the habit of “sounding like the Salafis themselves one minute but avowing moderation the next.” The Times reported the diametrically opposing statements of two Brotherhood speakers at a campaign rally in Giza. The first speaker called for “the rule of God, not the rule of the people,” adding, that the “enemy media” were already saying that “those who love Jews, the United States and Europe should make every effort to keep the Islamic spirit dormant. Look at the conspiracy!”

Minutes later, the top candidate on his party’s list, Essam el-Erian, vowed that the Brotherhood would stand for nonsectarian citizenship for all and that Christians and Muslims should enjoy equal rights as “sons of the nation.” Will the real Muslim Brotherhood please stand up?

The second Brotherhood speaker, of course, is the kind of person multiculturalists like to quote in their sermons about the need to respect all cultures equally and the so-called moderateness of those who only flirt with theocracy. But the first speaker, the Islamic scholar Sayed Abdel Karim, may speak for just as many or more Brotherhood voters in his appeal for the rule of God rather than of the people. The American who sounds most like him is Associate Supreme Court Justice Antonin Scalia, whose God is, of course, Christian and who cites the Bible in support of his pro-death penalty judicial views.

As I wrote in this column last year, many western observers were much too optimistic about the future of civil liberties in the Middle East after the largely peaceful uprisings of the “Arab Spring.” Americans, in particular, are loathe to consider the possibility that one political dictatorship may be exchanged, through a democratic vote, for a stifling new set of rules based on religion.

Part of our naivete about this matter is rooted in the religion-is-good propaganda that permeates our own society and has made political candidates careless at best, and contemptuous at worst, about our own separation of church and state.

I predict that the word “moderate” is going to be applied more frequently in the mainstream American media to the Muslim Brotherhood as the Salafis gain strength. One of the many pernicious effects of religious fanaticism is its capacity to force a redefinition of religious moderation to the right. After the Arab spring, advocates of human rights (Muslims and non-Muslims) were worrying about the influence of the Brotherhood. Now the forces that support secular democracy have to worry about far more radical people who subscribe openly to medieval religious laws that defy reason.

One of the lessons of history -- not distant but recent history -- is that so-called moderates, when their own power is on the line, tend to give in to the hardliners. Consider our so-called ally, Afghanistan’s President Hamid Karzai, who recently pardoned a woman sentenced to prison for 12 years for fornication after being raped by a relative. Sounds good, right? Except that Karzai’s announcement also made it clear that the woman was expected to marry the man who raped her, as prescribed by tribal custom and Islamic law.

Will the moderation of the Muslim Brotherhood turn out to be as fickle as Karzai’s? I don’t know, but I do know that it is naïve to expect any real social, economic or human rights progress in areas where the majority of inhabitants do not believe either in freedom of religion from government or freedom of government from religion but only in the deadly and deadening union of the state and the majority’s religion.