Fate of Ottoman Heritage in Mecca

The fate of the historic Ottoman-era porticos within the Masjid al-Haram (Grand Mosque) in Mecca has for a long time been an issue of concern. However, in recent months there has been no news regarding the latest situation of the ancient monuments or what is really going on in Mecca.

In recent years, reports saying that Mecca authorities have decided to remove the porticos -- which are an important part of a shared Islamic heritage -- as part of an expansion project to create more space for soaring numbers of pilgrims and have already started to demolish Ottoman architecture have drawn the ire of Turkish authorities.

Turkish officials, who insist on preserving the city's architectural heritage as well as the legacy of the Ottoman Empire, have raised the matter several times at meetings with their Saudi counterparts and have requested that the porticos, the only remnant of Ottoman heritage in Mecca, be left intact.

Among those meetings was one between Turkish Prime Minister Recep Tayyip Erdoğan and Saudi Arabia's King Abdullah bin Abdul Aziz in April 2012.

Last year, in order to pressure the Turkish government to closely follow up on the matter, Turkish opposition parties also submitted parliamentary questions enquiring about the situation of the Ottoman porticos in Mecca, and called on the government to take urgent steps for the protection of the monuments.

Following the Turkish reaction, the Saudi king ordered that the Ottoman porticos be preserved, ordering the demolition of only the porticos that were built in recent times during the previous construction.

Upon the request of the king, a Turkish company, the Gürsoy Group, was selected to carry out the expansion work within the mosque without demolishing the porticos. By selecting a Turkish company, the Saudis hoped to decrease the pressure from the Turkish side by saying, “We trust in Turks and they are the best for the task.”

After the inspection carried out by the Turkish company over which of the porticos' sections in the mosque are from the Ottoman era, the ones that were built at the time of the Ottomans were detached and packed up by the Turkish workers as part of the restoration work, and were taken under protection in a special area around Mount Arafat.

Gürsoy Group is the same company that is carrying out the controversial mosque construction project on Üsküdar's highest hill, Çamlıca, on the Anatolian side of İstanbul.

During the debates over the controversial Çamlıca Mosque, there were reports that the Turkish government was considering carrying the porticos that would be removed by the Saudis to Turkey and surrounding the mosque with those porticos and that Turkish officials had also conveyed their request to the Saudi side but had not received the green light to do so.

A few days ago, I was in Mecca and had chance to visit that special area where the reparation of the Ottoman porticos is being carried out by the Turkish company in accordance with their original form. 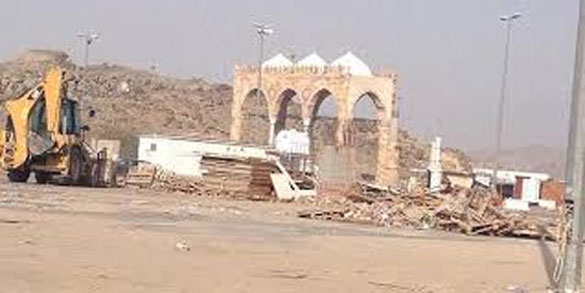 Needless to say, almost 300 historical buildings around the Kaaba have been demolished as part of initiatives to enlarge the area around the Grand Mosque in the last 80 years.

In 2002, Ankara reacted strongly over the destruction of Mecca's Al Ajyad Fortress, an Ottoman-era structure which was built in the late 18th century on a hill overlooking the Kaaba. At that time, due to the demolition, Turkey's then-minister of culture, İstemihan Talay, accused the Saudis of an “act of barbarism.” Regarding what is being done in Mecca now, some scholars still accuse Saudi authorities of “cultural vandalism.”

Now, in order to avoid similar incidents that would cause tension between two countries, the Saudi side should pay the necessary attention on the issue of the porticos while Turkey should closely follow what is going on in Mecca rather than only limiting its actions to rhetoric. Otherwise, this heritage issue could become a real headache in the future for both the countries and risk adversely affecting bilateral ties between Ankara and Riyadh.

Beside this, the crisis over heritage, or, in other words, the “war on legacy,” will not only remain as an issue between Ankara and Riyadh but will also include the Muslim world because the heritage that is destroyed belongs not only to Turks or Saudis but to the whole Muslim world. Therefore, the two countries should do their part before it becomes too late. Otherwise, not only will history not forgive those two countries, but also Saudis will be unable to explain how they demolished this heritage while Turks will be unable to explain how they closed their eyes to this matter to the Muslim world.