Faith in Islam Is Between a Person and Allah; No Mufti Can Set Them Apart 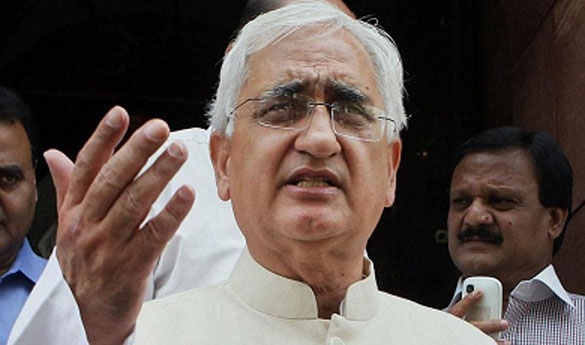 Photo: Photo: The Dar-ul Uloom at Deoband “expelled” Khurshid from Islam for what it perceives as an act that goes against the tenets of religion(PTI)

India is a land of harmony and the respect we traditionally show to each other’s faith is invaluable. It fortifies our respective faiths and does not undermine them.

For a long time I believed fatwas were something I read as interesting, sometimes perplexing judgments pronounced about distant happenings. But last week I discovered how they can come knocking at my door. My good friend Acharya Pramod Krishan has a passion for building a ‘Kalki Dham’ for the last avataar of Lord Vishnu near Sambhal. For some inexplicable reason, the previous government, as indeed the present one of Yogi Adityanath, has refused to allow the garbh grah (sanctum sanctorum) to be established.

Clearly matters of aastha are relegated to impervious office files unless there is some political advantage. A mandir without votes is after all not of much use and it is worse if it gets built and the votes go to some other camp. A few weeks ago, when I appeared before the Allahabad High Court to challenge the district administration’s decision prohibiting the construction of the temple on land belonging to Acharya Pramod, the Bench directed the respondents to give a speaking order within four weeks. Six weeks have gone by with no word from the administration.

The reason cited for refusing permission for a mandir is law and order. Yet that does not seem to stand in the path of granting permission to hold the Kalki Mahotsava every year in October. Like every year over the past decade, this year too permission was granted and the three day celebration took place in great style. Acharya Pramod invited me to participate in the inaugural that was attended by Jagat Guru Shankaracharya Narendra Swaraswati Maharaj, Swamy Chakrapani, the President of the Hindu Mahasabha and Shivpal Singh Yadav, former PWD Minister of UP. We all made appropriately well meaning speeches and were then invited to join the aarti for Bhagwan Ram.

Acharya Pramod did politely ask me if I was fine with that. Not only did I say it was fine but indeed that I was delighted. We made sure that the aarti was filmed and put up on social media. I am told that the faithful present that evening were pleased by the multi-faith participation.

There was little and insipid response on social media, as indeed there is when something good happens. But then came a TV channel statement of one obscure Mufti Tariq Kashmi from Deoband saying that a Muslim performing aarti would be excluded from Islam. Clearly some hungry reporter was looking for an easy meal and the so-called mufti offered himself as one.

Then began a churning of social media: ghar wapsi, halala, na ghar ka na ghat ka, mulla ki daurh mandir tak, etc as though I had hurt Hindu sentiment even more than obscure Muslim sense. In all this, I see a clear intent to shun and discourage anything that brings Muslims and Hindus together. But what is more, there is a startling ignorance about issues such as what is aarti, the prohibition on idol worship, a fatwa and the Deoband, leave aside India’s unique national ethos.

For a Muslim, it is a basic tenet that there is but one God Allah and Hazrat Mohammed is His Prophet. Someone who believes that cannot be told by a mufti or anyone else that he is not a Muslim. Participating in any ritual ( for a variety of reasons) cannot be equated with worship unless it involves allegiance to another God. The aarti is but a manner of showing respect and honour.

A fatwa can be given by a high authority for interpreting Islam and is not necessarily binding on a person not seeking it. Of course it has weight when it comes from a place like Darul Uloom, Deoband; but then every mufti who lives in the city does not represent the Darul Iftah that is authorised to pronounce fatwas.

Last but not the least, faith in Islam is between a person and his Allah and no mufti can part them. India is a land of harmony and the respect we traditionally show to each other’s faith is invaluable. It fortifies our respective faiths and does not undermine them. How feeble must a faith be if it withers by showing respect to another? Does anyone remember ‘Lakum dinakum waliya din’? To you your religion, to me mine. Co-existence is as much a part of the idea of India as Islam.