Confessions Beaten Out Of ‘Suspects’, Executions by the Hundreds... How Different Is Justice in Today’s Iraq from the Era of Saddam?

Saddam is Dead! Long live Saddam! And glancing through the grisly list of executions which the new, free, democratic, American-constructed Iraq has carried out – about 500 all told, and rising – Saddamism is flourishing in the land of the two rivers. Last year alone, 1,200 men and women were on death row, most of them sentenced after the usual pre-trial confessions under torture. In fact their court appearances were preceded, in many cases, by television interviews in which they admitted to their “crimes”. And sure enough, another 26 “terrorists” were executed in Baghdad last week as the country’s Shia Muslim prime minister tried to smother the Sunni revolt against him. 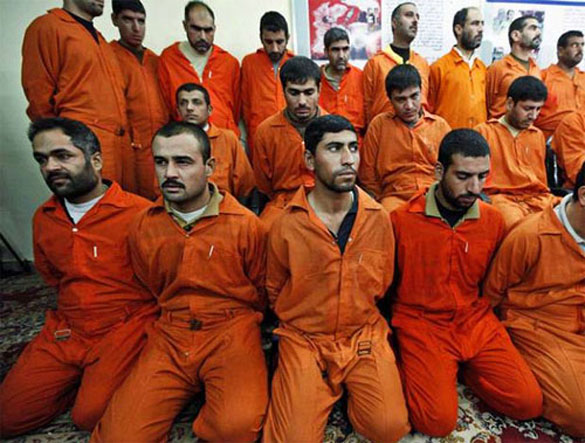 All too truly does the British lawyer Akhtar Raja speak when he tells journalists that “the tradition of relying on confessions in court is deeply rooted in the Iraqi psyche”. This is another of Saddam’s creations that has passed on seamlessly to his elected successors: the presumption of guilt. When a villainous rogue appeared on Iraqi television in the days of the Great Leader, did anyone dare to imagine that the man was innocent? So too today. “When you go to Iraq and talk to people there, even liberal, well-educated people who you’d think would say the opposite, they seem to think it’s perfectly all right to have these confessions,” Raja says. He is being too kind. Many Iraqis tell me that they insist on capital punishment, even if there is a chance the victim is innocent.

Akhtar Raja is currently acting on behalf of Abdullah al-Qahtani, a Saudi national banged up for an armed robbery on a goldsmith’s shop on 8 November 2009, in which a shop owner was killed. The court was told that the robbery was carried out to fund “terrorist” activities and al-Qahtani was sentenced to be hanged. He has also been sentenced to 15 years in jail for entering Iraq illegally “to carry out acts of terrorism”. And, just to beat that, al-Qahtani has also been charged for alleged involvement in the bombings of numerous Baghdad hotels on 25 January 2010. No trial date has been set for this latest accusation to be heard – if al-Qahtani is still alive to attend the court.

The only problem for the prosecution – which it doesn’t seem to care about – is that Mr Raja has established, with official Iraqi government documents to prove it, that from 4 October 2009 to 26 April 2010 al-Qahtani was in custody in al-Anbar province on other immigration charges – 60 miles from Baghdad. Thus the accused cannot be guilty of the crimes the government charges him with because, well, he was in the hands of the government at the time.

No matter. Mr Raja went to see al-Qahtani in prison a year ago and tells me that he spoke to the prisoner for 90 minutes and saw the marks of cigarette burns on his body. He had also, Mr Raja says, been hung up by his wrists and beaten and – according to al-Qahtani – assaulted with a broom and injured on his genitals. I am “softening” these details for the sake of his family. But that’s pretty much the same treatment that other prisoners get – you should see the marks on their faces when they appear on public television – and all the co-defendants in al-Qahtani’s case retracted their evidence on the grounds that confessions were extracted under torture.

Now for the grimmer bit. All but one of al-Qahtani’s fellow defendants have already been hanged. Mr Raja fears that al-Qahtani is in imminent danger of execution. So does Amnesty International. He currently resides in Kadhimiya prison at Prime Minister Nouri al-Maliki’s pleasure: the jail where all condemned men are sent. Saddam was taken there to be dispatched. And don’t think that death necessarily comes quickly in Iraq to those who have (or have not) made their peace with God. A Western prison investigator has told me that in one case at Kadhimiya, a condemned Iraqi man was made to stand on a bench, had the noose placed around his neck and was pushed off. But he managed to jump on to the floor. “So they shortened the length of the rope and got him back on the bench and pushed him off again. It didn’t work… They dug up the tiles and the cement (beneath the bench). But that didn’t work. So they just took him to a corner of the cell and shot him in the head.”

In October last year, 42 men were put to death in a series of mass hangings, some of them executed on 10 October, World Day against the Death Penalty. The following month, 11 Iraqi men were hanged on a single day for “terrorist attacks”. According to Mohamed al-Dainy, a Sunni member of the Iraqi parliament whom government agents tried to kidnap at Baghdad airport in 2009 – he now lives in exile in Jordan – up to two million Iraqis now live in fear abroad. “What the Iraqis are facing today is unprecedented, dear Fisk,” he wrote to me, “and can’t even be compared with other eras.” Well, I can think of at least one man right now who deserves mercy.