“Son, it is time for Friday prayers, you will be late.”

“I am just…not going. I will pray here at home.”

And a discussion began where my friend pushed to know why her 17-year-old refused to go to mosque. After much coaxing, the boy said: “Why should I go where the imam keeps making me feel like an atheist, where my political ideology is under question and evaluated from a religious perspective, with the conclusion that I am an atheist?”

My friend stopped there. She was cornered and her son doesn’t go to the mosque anymore. 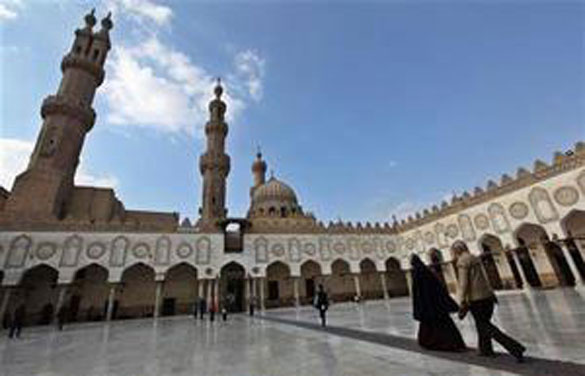 Another similar incident was with a mother of a 13-year-old, where her son refused to go pray at the mosque because the imam kept slandering unveiled women and the boy couldn’t take any more insults to his mother.

Religious education of their kids can be the biggest challenge facing middle class Egyptian women, specifically their boys because they are weekly exposed to sheikhs in mosques.

Egyptian society is probably the only one where millions of boys and men flock to mosques for Friday noon prayers regardless of how religious they are, or whether they in fact perform the rest of the week’s prayers. Egyptian men might be partying Thursday night, drinking and dancing, but they wake up on Friday to join the prayers.

More often than not, these boys and men eventually lean towards stopping whatever is deemed “sinful” as they grow older. This is why it is widely believed that Egyptians are religious “by nature”.

Regardless of whether the family is conservative or not, religious or not, Friday prayers are above question for Egyptian boys; they must go. Call it tradition, hidden religiosity, or even hypocrisy if you like, but this is who we are.

We send our children to international schools which give the worst Arabic and religious education possible, so we get private tutors to teach them religion. Regardless of how irreligious we are, this is what we do. We want our children to know their religion and we want them to be as good as they should be when it comes to their relationship with God.

We are a people who believe in heaven and hell, reward and punishment, sin and good deeds. We live by the saying that “good deeds erase your sins”, and we do both; we sin at night and wake up to Friday prayers, hoping for God’s mercy!

A shocking moment for me was when my 12-year-old suddenly started disrespecting sheikhs. Although I am not exactly a model of religiosity myself, it pained me to see such disdain from my boy towards those who are supposed to be holy men. And the worst part was that I could not defend the sheikhs, given that I do not want him to listen to the monstrosities these men utter.

We are now all torn between the reality of our religion, and the message coming from the bearded bunch. What are we supposed to tell our kids? Listen to the sheikh, or don’t listen? Go to the mosque, or don’t go? Should we monitor every speech they hear, every imam of every mosque, and pick a suitable rhetoric? Or should we drop this religious education altogether?

Now mothers are wondering what happens when their sons stop going to mosque every week. What happens if the religious curriculum at schools is modified to fit the ultra right-wing, conservative and mostly distorted ideology of our rulers?

What happens when our children are pushed away from their religion?

Our rulers are letting those who defame and deform our religion speak in mosques and on television. They are leaving those who want to form morality police to do as they please on the streets. They turn a blind eye to those who are working to destroy the largest, most important Islamic institution in the world; Al-Azhar.

Could the rise of Islam in Egypt lead to a generation of atheists?