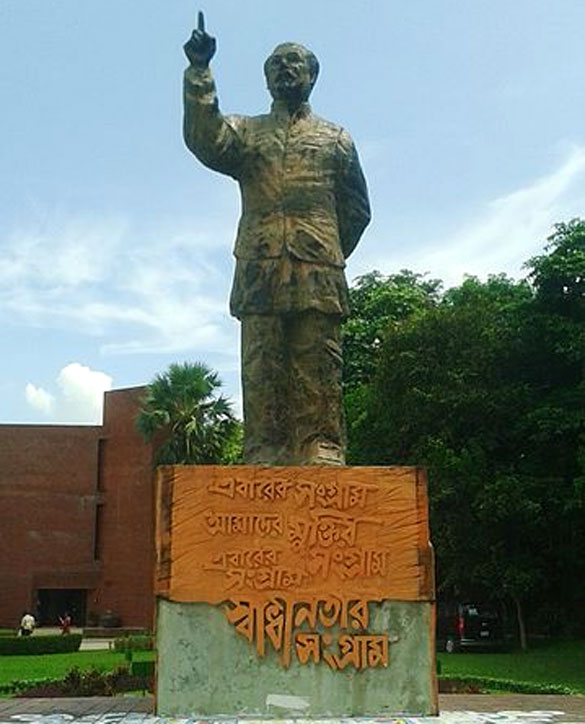 The anti-sculpture movement started by the radical Islamic group Hefazat-e-Islam seems to be heading towards a bloody confrontation between the Islamists and the Awami League government headed by Sheikh Hasina.

But the radical Islamist groups Hefazat-e-Islam led by Junaid Babunagari and Khilafat Majlis led by Maulana Mamunul Haque have waged a campaign against the installations of the sculptures of Sheikh Mujibur Rahman.

Junaid Babunagari had in November warned the government against installing the sculptures of Sheikh Mujibur Rahman and threatened with voilent protests if the installations were not aborted. His argument was that sculptures and statues were un-Islamic.

On November 13, Khilafat Majlis leader Manunul Haque had said that if sculptures were installed, the "faithfuls" will repeat the Shapla Square incident.

Shapla Square is a place in central Dhaka where the Hefazat-e-Islam had staged protests demanding enactment of a blasphemy law on 5-6 May 2013. The police, Rapid Action Battalion and Bangladesh Border Guard had launched a crack down against the protesters. In the crack down more than 50 Hefazat activists had been killed.

On 13 November 2020, another Hefazat leader Syed Faizul Karim had addressed a rally and warned the government agajnst installing the sculptures. He also took oath from the people to wage jihad against it. He further said that they wont even hesitate to offer blood to stop the installation of the sculptures. He had reminded the government that in Russia the 72 feet high sculpture of Lenin was pulled down by the people and thrown into the sea. He said that the sculpture of Sheikh Mujibur Rahman would also be thrown by the people of Bangladesh into the Buriganga. 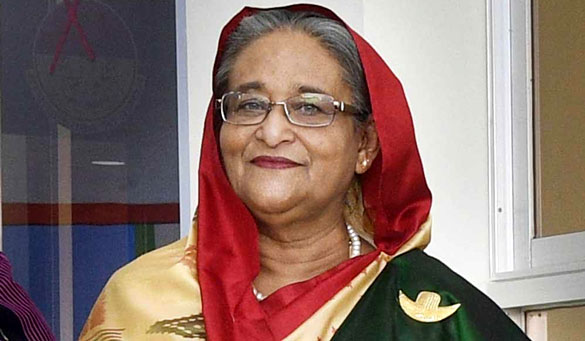 Junaid Babunagari had also said that if the government went ahead with the installation of sculptures, then the Shapla Square incident will be repeated.

This was an open threat by the Hefazat and Khilafat Majlis to cause bloodshed in the name of preventing the installation of sculptures.

Inspired by the speeches of the leaders of Junaid Babunagari, Syed Faizul Karim and Mamunul Haque, two madrasa students damaged an under construction statue in Kustia on the last Friday. The police arrested four people in this connection. The Home Minister Asaduzzaman Kamal said that the four arrested were madrasa students. Without naming Junaid Babunagari, Mr Kamal said that they were inspired by the speeches of one person. During the investigation, the name of one person has emerged, he said.

On 7 December Monday, a case of treason was filed by an activist Aminul Islam Bulbul against Maulana Junaid, Syed Faizul Karim and Mamunul Haque on the basis of their speeches in the Chief Metropolitan Magistrate's Court in Dhaka.

This has paved the way for the arrest of Junaid Babunagari in the treason and sculpture vandalisation case. If it happens, it will lead to another major showdown between the Hefazat and the government after 2013.

The anti-sculpture movement only seems to be a facade. The real purpose of the movement seems to destabilise the Hasina government as it has come to power for the third time. The BNP-Jamat-e-Islami combine has become desperate as well as the Pakistan lobby that had unleashed a reign of terror during BNP-Jamat government using Bangladesh land for subversive activities against India.

Under the Sheikh Hasina government, Bangladesh has witnessed peace and stability and has prospered economically by establishing good relations with India.

Since Jamat Islami has been rendered ineffective politically and organisationally, the Pakistan lobby has now relied upon Hefazat-e-Islam's mass base to disturb the power balance against the Hasina government so that by the next elections, Hefazat could emerge as a rival force that can challenge Hasina government along with the BNP-Jamat combine. By the time Hefazat will continue to project Hasina as anti-Islam only interested to promote and protect the interests of the Hindus, the Ahmadiyyas, atheists and secularists.

It remains to be seen how Sheikh Hasina tackles this new Talibani force in her country.