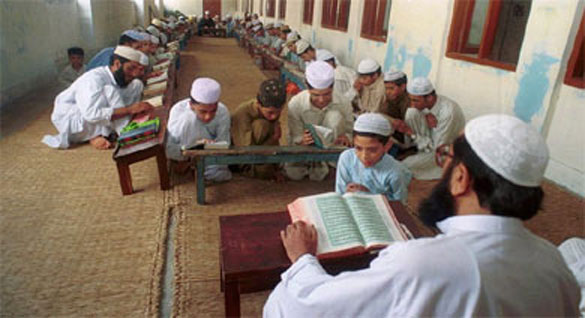 "The madrasas create their own social studies books that divide the world into Darul Islam and Darul Kufr," said Tariq Rahman, liberal arts dean at Beacon house National University near Lahore, referring to terms that mean "land of Islam" and "land of disbelief." (Associated Press) Photo by: K.M.CHAUDARY

Pakistani authorities say they have shuttered over 180 Islamic religious schools called Madrasas across the country in a yearlong crackdown on extremism, but even so, the closures affect only a fraction of the total number of seminaries suspected of preaching hatred and promoting a violent brand of Islamic extremism.

And despite the official campaign, the number of Madrasas — and their power — are growing.

Around 26,000 Madrasas are registered in Pakistan with a religious umbrella organization called Ittehad-e-Tanzeemat-e-Madaris. Experts believe around 9,000 unregistered Madrasas operate in the South Asian country too.

Launched after the Pakistani Taliban attacked an army-run school in Peshawar in December 2014, killing 141 people — including 132 children — the crackdown by the government of Prime Minister Nawaz Sharif, known as the National Action Plan, is proving too little too late, said A. H. Nayyar, a Lahore-based scientist and peace activist who has studied Madrasas. The Islamic schools are proving too powerful politically and able to thrive without official support, he said.

“The thought of reform did not even arise before the Madrasas started to create problems,” said Mr. Nayyar. “By then the Madrasa federations and their leaders had become politically very strong. Secondly, Madrasas had been historically very independently minded entities, not depending at all on any state largesse or any patronage of the affluent classes.”

Announcement of the closure of some 182 suspect Madrasas came after Pakistani officials said teachers at the Al-Huda Institute, a Madrasa in Multan, radicalized Tashfeen Malik, who killed 14 people with her husband in San Bernardino, California, in December.

The government also revealed this week that more than 120 bank accounts tied to radical Madrasas had been frozen in the campaign. Three Madrasas were raided in Pakistan’s volatile Quetta region on Monday, and four clerics from the seminaries taken for interrogation, according to Pakistan’s Dawn newspaper.

Al-Huda hadn’t been linked to violence previously and wasn’t among the closed schools. But Madrasas have long spread extremism throughout Pakistan.

Madrasa graduates founded Jaish-e-Muhammad, the Muslim militant group that has launched attacks against Indian forces in the disputed territory of Kashmir, and Lashkar-e-Jhangvi, the Sunni Muslim group that has attacked Shiites in Pakistan and was connected to the murder of American journalist Daniel Pearl in 2002. Both are now banned.

Pakistani forces raided the Jamia Hafsa; a Madrasa for women in Islamabad, in 2007 after militants took control of the school. In 2014 the Madrasa named its library in honour of Osama bin Laden.

“The Madrasas create their own social studies books that divide the world into Darul Islam and Darul Kufr,” said Tariq Rahman, liberal arts dean at Beacon house National University near Lahore, referring to terms that mean “land of Islam” and “land of disbelief.”

Their popularity rests not only in their appeal to pious Pakistanis, however.

“Madrasas often crop up where there is little government and few private schools, and the poor can only afford Madrasas in order to education their children,” said Zubaida Jalal, a former education minister.

American leaders have long called for Pakistan to take a harder line against its Madrasas.

“Some version of it plays out hundreds of times every day in far-flung places — from Pakistan to Kosovo to Nigeria to Indonesia — the teaching of an intolerant version of Islam to hundreds of millions of young people,” said Sen. Christopher Murphy, Connecticut Democrat, in a recent speech before the Council of Foreign Relations, adding that Pakistan hosted around 244 Madrasas in 1956.

Both Mr. Murphy and Mr. Royce noted that wealthy Saudi Arabians, Qataris and other Arabs were often bankrolling the Madrasas to spread their ultraconservative brand of Sunni Islam throughout Pakistan and elsewhere.

The Saudis have spent more than $100 billion on Madrasas and mosques around the world since the 1960s, Mr. Murphy noted.

“They are a few degrees separated from the terrorists who are often inspired by the ideology their money helps to spread,” he said.

Mr. Nayyar noted that the U.S. government also funnelled money into the Madrasas during the Cold War to build up institutions that would field fighters against the Soviet-backed government in Afghanistan and elsewhere, the very cause that brought bin Laden to the region in the late 1980s.

“Their use by the USA in jihad against the Soviet Union made them into battle-hardened militants who have now started to dream of establishing their own rule,” said Mr. Nayyar.

But now, it will be hard for Pakistan and others to curb the power of these institutions now deeply woven into Pakistani communities.

Nobody regulates Madrasas, said Ms. Jalal. Police may raid schools determined to spread radicalism, but they’re swooping in after months or years of students have been graduating and joining jihad.

“There is also no clarity on who will be the lead agency on Madrasa as a learning institution: Interior, Education or Religious Affairs,” said Ms. Jalal, the former education minister. “It is this lack of clarity that has been a source of real confusion since the past 15 years.”

Only around 2 percent of Pakistani youth study at Madrasas, she added. For government officials eager to show headway against terror networks, the Islamic schools are easy targets compared to other hotbeds of radicalism in the country, including those among the country’s elite circles, the military and the intelligence services. “Not all extremism is coming from Madrasas but from private schools — some low-cost and some high-cost too, as well as universities of stellar reputation,” Ms. Jalal said.

“The state curricula are themselves narrow-minded and cultivate chauvinism and hatred for ‘the other,’” he said. “The teachers of Madrasas and ordinary schools are often radicalized, so no matter what the books say, the teachers teach hatred for others.”

Massive investments in more moderate religious schools and higher-quality secular education would help curtail enrolment in Madrasas, he added. “Apart from spreading public schools and reforming their curricula, I can’t think of anything else,” said Mr. Rahman. “Banning any books or schools by force will probably push them underground.”

The Pakistani government also lacks the resources to compete with foreign funders of Madrasas, he added.

Meanwhile, moderate Muslim scholars who have floated proposals to deradicalise Pakistan’s Madrasas have found themselves the target of extremist threats, said Mr. Nayyar.

“There does exist an enlightened voice within Islamic scholarship which wants to see radical reforms in Madrasa education like, for example, saying that Islamic theological education should be taken like any other professional education, and therefore should come after 12 years of general broad-based schooling,” said Mr. Nayyar. “But those pushing for this have been forced to flee the country.”

“The biggest problem that I see with Madrasa education is that it only trains you in religion — no skills are taught,” said Junaid Shah, 21, a former Madrasa student in Lahore who took computer repair classes elsewhere to earn a living. “I know so many students who have come out of Madrasas and are jobless because there is no job market as such for them. How many pupils can actually become Islamic preachers?”