The Enemy is Us, It is Within Us 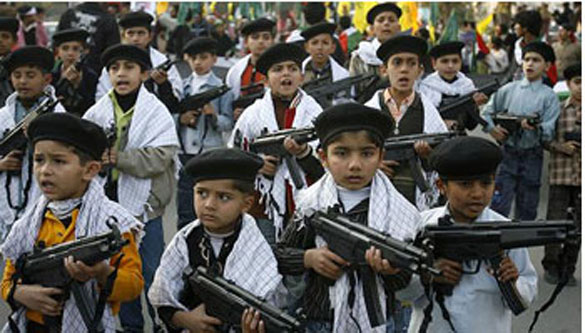 Pakistanis have become a callous case of some glaring social and political contradictions. Its people and politicians, army and holy men can be seen affectionately engaging with the most omnipresent symbols and gadgets of so-called ‘western materialism/imperialism’, and yet many of them do not hesitate to roll out high and mighty examples of oratory about political and cultural sovereignty.

Exactly what does a politically and culturally sovereign Pakistan really mean? This question is sure to attract a number of distinct answers. And that should be expected – especially from within the diverse ethnic and political milieu of Pakistan.

But unfortunately, even more than 60 years after the country’s emergence, this diversity is yet to be recognised and respected by the state that continues to strive rather unsuccessfully to define Pakistan through a rather synthetic ideology. An ideology that constantly drags in religion in the matters of the state and society believing it to be the glue that could hold the centre of this illusory singularity

It hasn’t. Because Islam in Pakistan has multiple sects and sub-sects, and each of these have their own take on the spiritual and legislative traditions and rituals of the faith.

Thus to ensure that tensions between the sects and sub-sects are kept at a minimum, government and the state, as well as the media, must stop pulling religion out of peoples’ homes and mosques and putting it into the public sphere.

The more it remains inside the privacy of homes and mosques, the better. Otherwise, Pakistanis of various sects and sub-sects will not only continue judging and denouncing the validity and authenticity of one another’s faith, they will go on clashing among themselves, as well as, with the singular version of religion that the state of Pakistan has been peddling for years – a strain mostly constructed with the help of petro-dollars that come in with the condition of forwarding a particularly stern and isolationist edition of the faith.

We glorify our importance by constantly suggesting how powerful nations are so interested in us.

Conspiracy theorists, politicians, soldiers, mullahs, Islamists and the media put us at the centre of the universe; a universe that we believe is teeming with malicious superpowers and other ‘enemy religions’ that are supposedly hatching diabolic conspiracies and schemes to destabilise our wonderful Islamic republic.

This is just a mirage; a feel-good, rather paranoid, projection. It is splashed across the social and political canvas that we trade upon to obscure the many state and social failures this unfortunate republic has been suffering in the name of religion, patriotism and, of course, now sovereignty.

We are behaving like a cultish collective that molested itself and then called the act ‘ghairat (honour).’!

Many would instantly take offense if you suggest the above, and after shouting you down as a traitor, they will proudly remind you that we are a nuclear power.

But the way we are going about in trying to isolate ourselves (in the name of defending our sovereignty and faith), I think we are trying to actually prove that we are really only slightly better than the isolationist, poverty-stricken and missile-happy North Korea!

Yes we have the bomb, but where are the new, quality schools, hospitals, a welfare system, political stability, a healthy competitive economy, democratic institutions and mindset, and a life free of sectarian and religious bigotry, strife and hatred?

We have become prisoners of our own delusions – delusions about ourselves and about the many countries and cultures that we believe are constantly scheming against us.

We refuse to free ourselves from these suspicious and blinding phantoms in our heads, and yet we demand sovereignty from the nefarious designs of our many (largely imagined) enemies?

I have continued to say this and I am going to say it again: The enemy is us! It is within us.

Once we manage to openly recognise and confess our own inadequacies and let go of our paranoid stubbornness to keep hanging on to ideologies that have only spelt disaster and have been resounding failures, our journey to a sovereign state based on religious tolerance, economic progress and a democratically achieved political, ethnic and sectarian plurality shall begin.

Till then all we can do is to keep cuddling our missiles and raise our bony fists in a delusional exhibition of empty triumph and hysteria. It looks even worse if exhibited on a half-empty stomach that had to be filled with the figurative grass just so the missiles are allowed to continue rolling out and test fired.

Genuine achievements in the sciences, the arts and economics that help Pakistan as a country and society to become an engaging part of the international community of nations should be the thing used to construct feel-good narratives; not demagogic spiels by hateful rattlers attempting to inflate young, impressionable egos with muscular promises of going to war with ‘infidels!’