Ever since the creation of the opposition alliance, the Pakistan Democratic Movement (PDM), the word ‘Ghaddaar’ (traitor) has been activated by the PTI government. Its targets in this context are mostly high-profile opposition leaders, and journalists who are highly critical of the current government (and its backers). 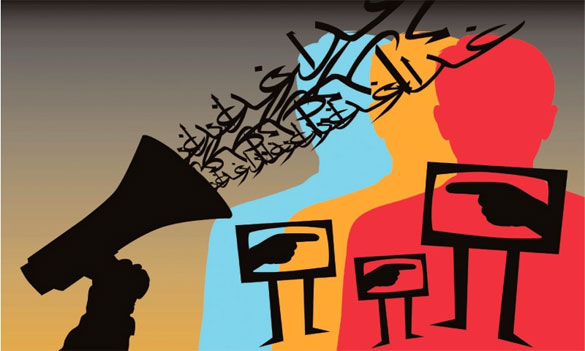 There is nothing new in Pakistan about those in power describing their opponents as ‘traitors’ or ‘fifth columnists.’ This has been going on since the 1950s. It began with a government describing communists as ‘fifth columnists’ and, then, in 1954 — after accusing the Communist Party of Pakistan of being on the payroll of the erstwhile Soviet Union’s intelligence agency, it banned the party.

When the four provinces of former West Pakistan were abolished in 1955 to create a so-called ‘One Unit,’ the phrases ‘Ghaddaar’ and ‘fifth columnist’ returned. But this time they targeted Sindhi, Baloch and Pashtun nationalist groups that protested against the creation of One Unit.

During the 1965 presidential election, the state media did not even spare Fatima Jinnah, the sister of the founder of Pakistan, who was challenging self-declared Field Marshal Ayub Khan in the polls. She was crudely demonised for “working with anti-Pakistan elements whose sympathies lay with enemy countries.” Yet, all this did not stop the fall of the Ayub regime (in 1969), and the state from being forced to abolish the One Unit.

But because of the antagonistic separation of East Pakistan in 1971, the alarmist exercise of labelling the opposition ‘fifth columnists’ and ‘traitors’ was revived once again, this time by an elected regime. In 1975, after declaring that its opponents in the National Awami Party (NAP) were working to further splinter the country (“at the behest of hostile foreign powers”) the populist government of Z.A. Bhutto banned NAP through a court order.

Yet, two years later, Bhutto himself was toppled in a reactionary military coup engineered by Gen Zia. Just before Bhutto’s execution in 1979 through a sham trial, Zia attacked Bhutto as the man who broke Pakistan (in 1971), even though, at the time of East Pakistan’s secession, Gen Yahya Khan was at the helm as ‘president’ and chief martial law administrator.

Across the Zia dictatorship (1977-88), opposition leaders were not only banned from taking part in politics, but they were also constantly demonised as being Soviet and Indian agents. What’s more, the Zia dictatorship added another dimension to this ploy, by describing his opponents as ‘anti-Islam’.

Again, this did not stop the people from electing Bhutto’s party, the Pakistan Peoples Party (PPP), twice after Zia’s death even though, during the 1988 election, Bhutto’s daughter was vehemently attacked by the then pro-establishment Pakistan Muslim League (PML) of Nawaz Sharif for allegedly wanting to roll back Pakistan’s nuclear programme. She was later accused by the right-wing press of ‘inviting US intervention’ when she was removed as PM by the ‘establishmentarian’ President Ishaq Khan in 1990.

Ironically, by 1999, Nawaz himself began to face the label of being a ‘traitor’ when his second government was toppled by Gen Pervez Musharraf. Yet, in 2008, it was Musharraf who was forced to resign.

During the fourth PPP government (2008-2013), pro-establishment groups continued to undermine the regime, accusing it of safeguarding the interests of the US in the region, even when, ironically, much of American aid was being pocketed by the Pakistani military to fight terrorism.

Today, one is again witnessing a similarly vicious anti-opposition campaign unleashed by the government, in cahoots with its sympathisers.’ Many in Pakistan are of the view that the ploy of demonising opponents as ‘traitors’ or ‘fifth columnists’ is very much a Pakistani trait. Not quite.

A study published on May 24, 2018, by the British academic and author Dmitry Chernobrov, demonstrates that the aforementioned ploy has been regularly wielded in various countries, especially by current populist regimes in the US, UK, Russia, India, Brazil, Turkey, Poland, Pakistan and Hungary, and by overtly authoritarian set-ups in Egypt, Belarus, etc.

According to the Australian researcher and author Robert Loeffel, in his 2015 book The Fifth Column in World War lI, the term ‘fifth columnist’ first originated during the Spanish Civil War in the 1930s between left-wing Republicans and the ultra-nationalists led by the Spanish military. The nationalist Gen Mola announced that, although four columns of troops surrounded Republican-held Madrid, the city would fall to a fifth column ready to strike from within.

By this he was alluding to secret sympathisers within the Republicans who would weaken them from inside. During World War II, Nazis in Germany and the fascist regime in Italy began to demonise and hunt down opponents by labelling them as ‘traitors’ and ‘fifth columnists’ who were working for their countries’ enemies.

Does this ploy actually aid regimes to vanquish their opponents? History suggests that it does not. So, if it doesn’t, why is it so constantly used? And does it gain any traction from the polity?

The answer to the last question is related to the answer of the first. Nazi Germany and fascist Italy fell in the most violent manner. And a majority of Germans and Italians turned against their fascist past whereas those once demonised as being ‘fifth columnists’ returned to rule and reconstruct these countries. One can say that, in the throes of intense crises, polities may get emotionally invested in looking for scapegoats and support the labelling of people as ‘fifth columnists’. But this does not last.

In their 1997 book Security: A New Framework for Analysis, Barry Buzan, Ole Wæver and Jaap de Wilde write that the propensity of a regime to start describing opponents as ‘traitors’ and ‘fifth columnists’ often increases in times of political and economic crisis. They write that such regimes identify themselves as being expressions of the state’s security and, therefore, their act of calling out opponents as traitors can be explained as a ‘securitising move.’

By this the authors mean the regimes club together the government and those who agree with its point of view as patriots, and discard those who don’t as traitors — because they reject a point of view which is supposedly ‘in the best interest of the state and nation.’

Therefore, political opposition is typically blamed as externally funded, destabilising and treacherous. But as we have seen in Pakistan, this ploy often becomes a caricature of itself and an unintentional self-parody, especially when deployed by a regime which is fluent in rhetoric but entirely inarticulate and even stunted in ways of governance. It has nothing to offer to a polity in a crisis, other than lectures on patriotism and warnings about largely imagined ‘traitors.’