In 1973, an Urdu film, Insaan Aur Gadha (Man and Donkey) was suddenly ordered by the government of Z.A. Bhutto to be taken off the screens, just weeks after it was released. 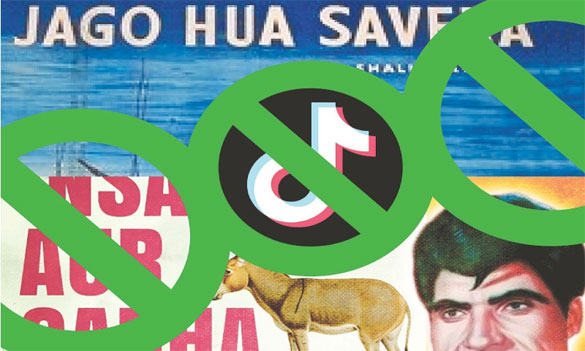 Directed by the late actor and director, Syed Kamal, and starring the popular comedian, Rangeela, the film was a satire on the human condition in Pakistan. Rangeela played the human version of a donkey who had prayed to God to transform him into a human being.

After the donkey’s prayers are heard and he turns into a man, he soon realises that his existential purpose and sense of morality had more meaning, balance and clarity as a donkey than as a human being. Disappointed by humanity (or its lack thereof) he ends up asking God to turn him back into a donkey.

The reason the film got taken down by the government was a scene in which the donkey-turned-man (Rangeela) addresses a large gathering of actual donkeys. He promises them that he would fight for their rights and against their cruel and unjust human masters. The late filmmaker, Mushtaq Gazdar, in his book Pakistani Cinema: 1947-1997, writes that the scene did not hide the fact that it was parodying PM Bhutto’s signature style of populist oratory.

This was what had angered Bhutto. But his government’s censor board shared this reservation only with the producers of the film. Publicly, the reason given for the ban was that the scene had ridiculed the masses, by depicting them as a bunch of donkeys.

Even though the film was eventually allowed to return to the cinemas, it is interesting to note the nature of the justification given by an offended government for its removal from cinemas.

Recently, the Pakistan Telecomm­unication Authority (PTA) banned the popular Chinese app TikTok just days after PM Imran Khan lamented that it was promoting ‘immorality’ in the country. However, in a tweet, the senior political commentator Najam Sethi insisted that the app was banned because many of its local content-makers were parodying and satirising Khan’s populist rhetoric, which is in stark contrast to his government’s political and economic incompetencies.

The ploy of using moral and/or religious rationale and angles to ban a cultural product that has offended a sitting ruler’s inflated ego was not present in the country before the late 1970s.

Jago Hua Savera, scripted by the famous communist poet Faiz Ahmad Faiz, is a story based on the struggles of a poor fishing village in former East Pakistan. Ayub saw it as commentary against his ambitious economic plans. But the reason given by the regime for banning it was that its content was ‘inflammatory’ and that it could arouse hatred among East Pakistan’s Bengali majority against their West Pakistani brethren. In today’s Pakistan, Ayub could have simply banned it on the grounds of it being a communist film, and thus promoting atheistic ideas.

In his 1967 book Islamic Modernism in India and Pakistan, the scholar Aziz Ahmad writes that the founders of Pakistan went out of their way to underline the fact that their idea of Islam was different to the one held by most Ulema and clerics. To the founders, their idea of Islam was inherently modern, rational, sophisticated and progressive, as opposed to the ‘reactionary’ and myopic ideas of the faith propagated by the Islamists.

The state and various governments carried forth and further expanded this narrative till 1974. Therefore, till then, the notion of banning a cultural product on the basis of morality would have seemed contrary to this narrative or something that was the domain of unsophisticated mullahs.

However, things began to change rapidly after the Z.A. Bhutto regime handed the once despised ‘forces of myopia’ their greatest victory through the constitutional Second Amendment in 1974, which ousted the Ahmadiyya community from the fold of Islam.

But Z.A. Bhutto was giving himself too much credit for anticipating this shift, and, more so, for believing that he was monopolising it before the Islamic parties could. Because no matter how hard he tried, the Islamic parties understood the dynamics of this better than he did and were therefore more adept at exploiting its emotional and psychological appeal, as they did during their 1977 protest movement against the Bhutto regime.

The tactic of using the ‘Islamic/morality card’ to proscribe a cultural product which, in reality, has only offended the ego of a ruler, earnestly began from 1977 onwards, with the coming to power of the reactionary Zia-ul-Haq dictatorship.

Before my father passed away in October 2009, he would often tell his friends the story of how, soon after the 1977 coup, when he was a reporter at a large Urdu daily, he was told that his name had been put by the dictatorship on a ‘blacklist’ of ‘pro-Bhutto journalists.’ This meant he could not write anything on politics. So, a few days before 1978’s Eid-ul-Aza — the day when Muslims sacrifice bulls, goats or camels — my father was allowed by the editor to do a completely apolitical piece on a make-shift market of sacrificial animals in Karachi’s Gizri area. He went there, completed his report and submitted it.

The next day he was told that the report had been removed by the Zia regime’s Information Ministry, which used to scan newspapers before they went into print. A member of the ministry told the editor that there was a whole paragraph in the report about how people were checking the front teeth of the sacrificial goats. The ministry man then added that the writer was being ‘cheeky’ by indirectly mocking Zia’s prominent front teeth. But the reason provided to my father was that the article was ‘ridiculing the holy tradition of animal sacrifice.’

The act of proscribing a cultural product on the basis of ‘immorality’ just because it offends the bloated ego of an individual or that of a community has little or nothing to do with preserving the moral fibre of a nation. Instead, it’s more about feeling a sense of power, which feeds inflated egos and the monomania of those who have an entirely illusionary understanding of the society they live in. Unlike those who go on a banning spree to avenge what they believe has offended them individually, the other lot actually believes they are fighting a holy war to save society. The result is a suffocating environment, which stunts the growth of creativity, tolerance and of democratic values in a society.