Syria's Brave but Divided Opposition is on its Own 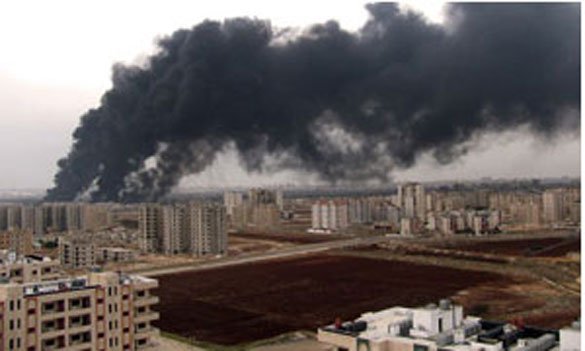 Smoke rises behind residential buildings in the Syrian city of Homs last week after the bombing of an oil pipeline – blamed on a terrorist group by the authorities. Photograph: Sana/handout/EPA

The West's approach should be Hippocratic: first, do no harm.

Given the events of the Arab Spring, some might say that the telltale sign that a dictator's days are numbered is when his defiance turns to delusion. Last Wednesday, in an interview with ABC's Barbara Walters, a chuckling and snorting Bashar al-Assad, the Syrian dictator, tried to deny any responsibility for the attacks on his own people: “They are not my forces. They are the forces belonging to the government. I don't own them, I'm President.” This, of course, is denial of the highest order. Syria is a police state in which Mr. Assad and his Ba'ath party cronies call all the shots — literally. According to the United Nations, Syrian security forces have killed more than 4,000 since protests against the regime broke out in March. (“Some mistakes committed by some officials,” shrugged Mr. Assad.) His television interview has been interpreted by some as further evidence that the Syrian regime is on the back foot. But is Mr. Assad really close to quitting? Or being toppled? Of the three dictators who have fallen since the start of the Arab spring, one (Muammar Qadhafi) is dead, one (Hosni Mubarak) is on trial, and one (Zine el Abidine Ben Ali) is in exile. Mr. Assad is reported to have turned down offers of safe haven in the Gulf and continues to show no mercy to the protesters. His Shabiha militias roam Syria's streets, shooting, maiming and torturing. On Sunday, at least nine people were killed in clashes as opposition activists tried to call a general strike.

So it would be a mistake to write off the ruthless Syrian President, no matter how deluded he might seem on television. His regime has been remarkably resilient, despite having endured U.S.-imposed sanctions for the past seven years. In 2005, following the assassination of the former Lebanese Prime Minister, Rafiq al-Hariri — allegedly on the orders of Syrian intelligence — many Western analysts assumed that Mr. Assad, the young, pampered, U.K.-educated eye doctor, was finished. Yet he not only survived but emerged stronger, more determined and more outspoken on issues of Middle East diplomacy.

Syria, of course, is a key player in the region: the Americans and Israelis want Mr. Assad gone in order to try and pull Syria out of Iran's orbit(as well as Syrian-sponsored militant groups like Hamas and Hezbollah); the Russians are defending Mr. Assad in order to protect their business interests in Damascus and to prevent any knock-on effects from a Syrian civil war on Russia's own restive province of Dagestan; the Turks have turned on Mr. Assad, their former ally, in order to bolster their new position as a regional power and diplomatic linchpin; and the Gulf Arabs just want to back a Sunni majority against a minority Shia/Alawite regime.

Yet, as Flynt Leverett, a former Middle East analyst for the U.S. National Security Council and the CIA, has observed: “It is far from clear that the Assad government is actually imploding ... Moreover, no one has identified a plausible scenario by which the ‘opposition', however defined, can actually seize power.” Mr. Leverett is right to put the word “opposition” in quotation marks. There is no singular, unified or cohesive movement against Mr. Assad. In a reflection, perhaps, of the country's array of religions, sects and ethnicities, Syria's dissident groups are diverse and divided. They cannot agree on tactics or goals, with credibility and legitimacy varying from group to group.

The biggest point of tension is between exiled opposition activists and protesters on Syria's streets. “There have been a dozen conferences and statements in several cities but nothing to show for it,” a protester told the Economist back in September. “Meanwhile we continue to go out and take the bullets.” Another major tension is between the Syrian National Council (SNC) — formed in August from a multiplicity of opposition groups, including the Muslim Brotherhood and the Kurdish Future Movement party, and led by the Paris-based Syrian academic Burhan Ghalioun — and the Free Syrian Army (FSA), composed of around 15,000 defectors from the armed forces.

Mr. Ghalioun is a popular figure in Washington, having told the Wall Street Journal earlier this month that a post-Assad Syria would cut off military ties with Iran and reduce its support for Hamas and Hezbollah. Yet his SNC insists that the Syrian opposition must not resort to violence or turn to armed resistance. The FSA, however, has launched attacks on Syrian soldiers and Ba'ath party offices. “We don't like [the SNC] strategy,” the FSA coordinator Abdulsatar Maksur told the New York Times last week. “We favour more aggressive military action.” Then there are the sectarian and ethnic tensions. The opposition has been desperate to downplay the fact that it is largely drawn from Syria's Sunni Arab majority and rejects claims that it is directing its protests and anger towards the privileged Shia Alawite minority that rules the country. Yet in July the International Crisis Group, an independent, Brussels-based think-tank, published a report that claimed that the opposition had “edit[ed] out sectarian (i.e. anti-Alawite) slogans that at times are voiced on the streets” from the videos of protests that it regularly posts on the internet. Since Friday, however, the SNC has been focused on one particular task: warning Western governments and journalists that Syrian forces are planning a massacre in the western city of Homs.

There are reports that Western intelligence agencies have been training the FSA. More worryingly, if one looks at precedents from Kosovo to Libya, this could mark the beginning of a descent down the slippery slope to war.

But a Western-led military intervention in Syria would be a disaster. Unlike with Libya, there is no prospect of a U.N. Security Council resolution, and nor has there been a call for military action from the Arab League — or from Syria's internal opposition groups. “We reject foreign intervention — we think it is as dangerous as tyranny. We reject both,” says Hassan Abdul-Azim, a leading member of the National Coordination Committee, a grassroots (and anti-SNC) umbrella group of nonviolent opposition activists inside Syria.

Logistically, a no-fly zone would be of little value in Syria, where Mr. Assad's security forces and militias are carrying out small-scale, street-by-street operations against civilians, rather than launching massed assaults, or air strikes.

So the West's approach in Syria should be Hippocratic: first, do no harm. Further sanctions might succeed in squeezing Mr. Assad's mafia-like regime, but carpet-bombing the suburbs of Damascus or Aleppo will do little to protect civilian lives or bolster the opposition.

The youth of Syria — brave, unarmed, idealistic — are being cut down by Mr. Assad's troops and yet the grim reality is that there is little the West can do to help them: we cannot control events in Syria or bring about a speedy end to the crisis. If the popular uprising against the Ba'athists is to succeed, Syrians — of all parties, sects and ethnicities — will have to make it happen on their own. The sad truth is, it is not our job to topple Mr. Assad.

Mehdi Hasan is Senior Editor (politics) at the New Statesman