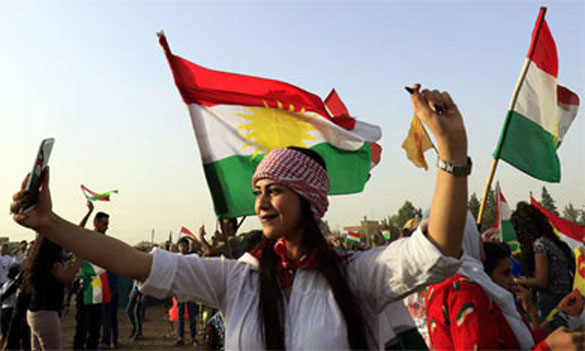 A Syrian Kurd takes a selfie in the north-eastern city of Qamishli during a gathering in support of the referendum in Iraq’s northern Kurdish region. Photograph: Delil Souleiman/AFP/Getty Images

More than 92% of voters in Iraqi Kurdistan have opted for independence, according to election monitors, in an overwhelming endorsement of a proposed split from Baghdad that has sparked increasing threats of air and land blockades that could be imposed as early as Friday.

The result came after Iraq’s parliament authorised the prime minister, Haider al-Abadi, to send troops into areas disputed between Arabs and Kurds that were contentiously included in the ballot.

Euphoria on the streets of Erbil in recent days has been met with sharply increasing tension in the region, which is likely to escalate in the wake of the result.

Baghdad has threatened to close Kurdish airspace at 6pm (1500 GMT) on Friday and Turkey says it is considering whether to shut its frontier with Kurdistan and impose a trade ban.

But in an attempt to calm ever more heated rhetoric, Abadi appeared to rule out the use of military force, saying on Wednesday: “We don’t want a fight between Iraqi citizens.”

Masoud Barzani, the de facto president of the region’s Kurds, had hoped to use strong support for the poll as political leverage that could eventually help negotiate independence from Iraq. His moves have been met with increasing hostility, raising the prospect of isolation and blockade.

Some Iraqi leaders have warned of military action, particularly over the fate of Kirkuk, and the national parliament approved the use of force as part of a 13-point resolution condemning the referendum.

Peshmerga fighters took control of the Kirkuk oilfields in 2014, when the Iraqi army fled in the wake of Islamic State’s advance on the city. Kirkuk is home to Kurds, Turkmens and Arabs. The latter appeared to boycott the ballot, while Kurds turned out in large numbers.

Iran has threatened to use Iraqi militias, with whom it has strong influence, to wrest back control of the city, which is essential to Kurdistan’s fragile economy. As revenue sharing and oil deals have collapsed over the past four years, the Kurdish north has completed construction of a pipeline to Turkey, which has helped the Kurds export oil using its Mediterranean port.

Trade between Erbil and Ankara is thought to be close to £7.5bn a year, meaning Turkey would face a significant financial blow if it chose to close its borders. Officials in Erbil believe the Turkish president, Recep Tayyip Erdoğan, will pull back from his threats, but are less sure about the next moves in their standoff with Baghdad and Tehran.

Nationalistic fervour has been widespread in Erbil since Monday’s referendum, which large numbers of Kurds have hailed as a landmark moment in a centuries-old push for self-determination. Barzani has insisted the poll does not trigger immediate moves towards sovereignty. Rather, he says, it lays the groundwork for further discussions with Baghdad.

In the absence of a mechanism to advance independence, critics of the referendum say it is little more than an opinion poll, which could only be leveraged into statehood through broad international involvement.

With the exception of Russia and Israel, all regional states and most international allies and foes opposed the referendum, fearing it would destabilise an already volatile area.

The US and Britain, which strongly opposed the referendum and have since described it as “deeply disappointing”, have softened their rhetoric and have tried to broker a deal between Erbil and Baghdad. Washington has challenged the air blockade, which has led to many international carriers suspending flights to Erbil.

The Kurds are the region’s fourth largest ethnic group and have never obtained a nation state. The carve-up of the Middle East after the fall of the Ottoman empire left substantial Kurdish populations in what is now Iraq, Syria, Turkey and Iran, as well as a large diaspora abroad. Moves towards sovereignty have long been opposed by all four states, who fear knock-on effects within their Kurdish communities and potential threats to their borders.