Sahar Lotfi finds it strange that an all-girls band in Kashmir has been hounded into silence. Where she comes from, her all-women group called the Ghazal Band has been blasting out Sufi music at public performances for more than a year. Lotfi and her band members live in Tehran, the centre of Ayatollah Khomeini's Islamic revolution. 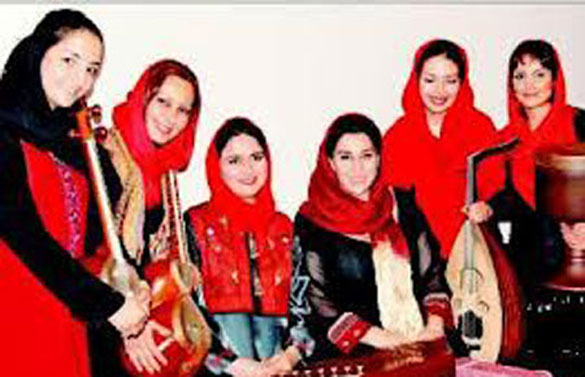 And the six girls rub it in when they tell people in democratic India that not only are musical concerts by women in Iran a regular feature, often there are bigger crowds attending them. "The music culture in Iran has always been vibrant and there are private music schools, though separate for girls," says said Sahar Lotfi, lead vocalist.

And while little help has come in for the girls of Kashmir's Pragash rock band, Lotfi says that her family has always been supportive and it was her husband's idea to form a band.

"My husband has his own band. We met at a concert where he was performing and I had gone there with my mother. After marriage, he convinced me to form a band of my own. That's how I got in touch with Maryam, our Thor instrument player," Lofti said.

Roshanak Nouri, percussion player, explained the band's name, Ghazal. "For us, it means emotions. Through our songs we are channelling out the emotions a woman feels," she said.

Clad in jeans and top, and with their hair left loose, the girls hardly look like the "typical" Iranian woman. Laughing off the stereotype, Maryam, wearing a fitted orange top, says, "We are Kurdish, from northwest Iran, and our families are very open. In fact, my mother teaches music at one a private school."

The youngest band member, 23-year old Elmira Mardaneh, said she took off her Hijab the moment she landed in India. "I have been wearing one since childhood because there was no other option. I have bought a lot of scarves from here as I'll need them back home. But why cover my head in India when I'm not forced to?" Elmira said, tucking into Dal and rice.

The women, on their own in Delhi, said they feel safe here. "Usually our husbands and fathers accompany us, but in India we are safe. When we perform in countries like Kuwait and Saudi Arabia, our family members come with us," said percussionist Sara Fotros, 31. Sara, her finger tips coarse with injuries picked up while playing her instrument, gave up studies to give more time to music. She joined the band seven months ago. "I'm not new to India and have been here twice. I didn't face any kind of assault and people are very warm here, unlike the French," she said, when she got to know about rape threats received by Pragash band members.

The Iranian band will be performing at Kamani Auditorium on Friday, as part of the International Sufi Festival being held from February 6-8. Other international bands like the Pinana brothers group from Spain, Mugam from Azerbaijan and Mechket from Tunisia are among the participants.

"Sufi tenets originated even before the advent of Islam and have their roots in gypsy traditions. Sufism is close to nature and not influenced by narrow beliefs. Free passes are available for the festival," Suresh K Goel, director-general, ICCR.