Egyptian Tragedy and Lessons for Bangladesh

EGYPT is turning out to be a textbook case of how a non-democratic regime can turn to democracy, and then quickly return to an undemocratic state with real vengeance. Just a couple of years back Hosni Mubarak, a dictator for three decades, was brought down by an unexpected general uprising of a broad coalition of political and social elements. After some confusion, Egypt managed to hold a relatively free and fair general election, which resulted in a marginal victory for the Muslim Brotherhood, a long and well established religious-political force. 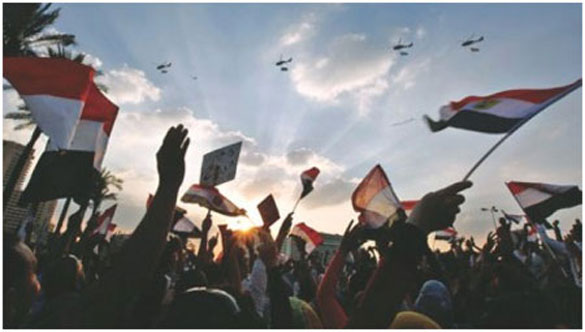 A section of Egyptian elite, spearheaded by the military, took advantage of the incompetence of Mohammed Morsi regime’s, even high-handedness, and sacked the elected government. That has now resulted in the current bloodbath in clear violation of all civilised norms. This will further reinforce the lack of trust on all sides and the ‘zero-sum’ political game in Egyptian politics. It will result in escalation of violence and many more deaths on the streets of Egyptian cities. Finally, another period of brutish military rule will be ushered in, bringing to an end the nascent democratic process, and return to status-quo ante.

The events in Egypt over the last few years, as described above, is a classic example of non-linear democratic process where democratisation means net movement towards broader and more equal rights for citizens, more protection against arbitrary action of state, and more binding consultation between the state and its citizens. History tells us that this non-linear process is a swing from democratisation to de-democratisation and back to democratization, and the degree of that swing naturally varies from country to country depending on the peculiar conditions prevailing at that time.

Between 1798 and the present, France experienced four periods of democratisation and three periods of de-democratisation. From mid-19th century Belgium, Germany, Bohemia, Austria, Italy and Switzerland made bids for democracy but most of them were quickly reversed. We also know from history that most regimes have been undemocratic, and democratic regimes are rare and recent, particularly emerging in 20th and 21st centuries.

Democracy has also come in waves: 1850 to 1899; 1900 to 1949 and 1950 to present. The first wave was dominated by Europe. During the second wave between 1900 and 1949 Europe and the Americas made substantial progress with Egypt as the sole country in Africa beginning the democratic process. Since 1950, we have witnessed a democratic ‘tsunami’ in Asia, Africa and Eastern Europe. But, as we know, the recent democracies have been moving ‘in’ and ‘out’ of the democratisation process. Presently, there are some prime candidates in the Arab region, South Asia and Africa.

This brings me to Bangladesh. Since its birth as a nation-state in 1971 Bangladesh hasn’t been an exception to the general rule of non-linear experience of democracy: 1974, 1975, 1982, 1991, 1996, 2007 are significant years, when the pendulum has swung back and forth but generally hovered over a mixed terrain of impressive popular support for democracy but with a vision-devoid and corrupt elite holding the reins of power, failing to deliver on several occasions.

Since 1991 Bangladesh has experienced a parliamentary form of government, only by name. The substantive meaning of democracy has been missing. Similar to Egypt, but played out over a longer period of time, Bangladeshi politics has also failed to consolidate the democratic ‘gains’ due to the high level of mistrust and prevailing zero-sum-game mindset among its politicians.

We are often asked nowadays, “where is Bangladesh heading?” There is ample evidence to suggest that the citizenry is ‘for’ democracy. More pertinently put, ‘what stand will the elites –intellectuals, businessmen, lawyers, journalists, NGOs and, above all, politicians — be taking to avoid the fate of Egypt?’ The scenes from Egypt should have a profound sobering effect on the Bangladeshi elites. If they fail to take immediate and concrete steps to resolve the outstanding political issues then a period of de-democratisation is inevitable. History is rarely wrong.

Manzoor Hasan is a Barrister-at-Law, and a policy analyst.