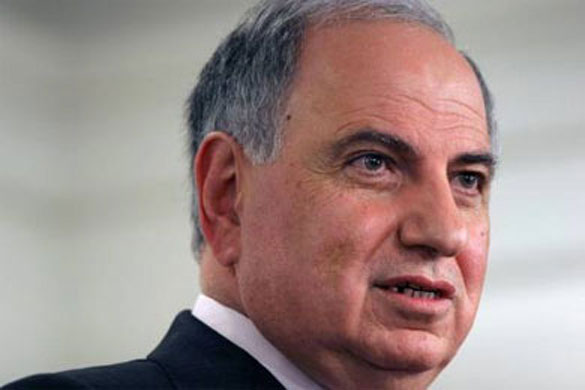 It says a lot about man's record in life, that within hours of his death he is widely proclaimed to have shifted the course of history, even though he was never a head of state.

Ahmed Chalabi the man is gone, but his spirit is so strong that even many of his detractors have long held a grudging admiration for a man of legendary intellect and drive. It is no surprise, because here was a man who overcame monumental hurdles to unify the Iraqi opposition in the 1990s, calm tensions in an effort to end the Kurdish civil war and juggle relations with Democrats and Republicans, who often had very different Iraq policies.

During this time, deep uncertainty pervaded American politics as to whether anything could be done about the tyranny of Saddam Hussein -- some in Washington had the ear of governments in the region who tacitly supported Saddam, even after the Kuwait invasion. But Chalabi sold his cause -- shrewdly and with great determination, making a case to end a genocidal regime. This was masterful politics, but not necessarily masterful manipulation.

Even Scott Ritter, the former weapons inspector who eventually stood against the war conceded that Chalabi had "a reliable network" that provided information of "considerable value" to the United Nations Special Commission (UNSCOM). This certainly calls into question some of the claims about Chalabi the "fabricator" given that not only was Ritter an expert, but was also opposed to the war.

Historians remain divided over Chalabi's role regarding Weapons of Mass Destruction, but this has been overblown -- why else did none other than head U.N. weapons inspector Hans Blix report to the U.N. that there were substantial amounts of unaccounted for WMD? Today, Iraqis are not so interested in the nuances of the debate on WMDs because the biggest WMD in Iraq was the genocidal maniac Saddam.

Despite these historical complexities, many still seek to portray Chalabi as the Machiavellian puppet master par excellence. This is not the man I remember.

It is based on a simplistic reading of history that begins with President George W. Bush, 9/11 and the run up to 2003. But it completely overlooks 12 years of bloody Iraqi history after the first Gulf War, so critical to understanding the aftermath of regime change.

A deeper analysis finds a man who saw an opportunity to do what any sane person faced with tyranny would do. He took the drastic action required to bring about its downfall. As Iraq appeared to collapse into chaos after 2003, the dark days of the 1990s period have been largely forgotten.

Of course, Iraq has certainly been through some horrifically bleak chapters, even before the fight against the so called Islamic State (known as ISIS or ISIL) and the anarchic civil war years of 2005 - 2007.

But we cannot forgot the motives of the opposition that sought to finish Saddam: justice for the 200,000 Arab Shi'a killed between February-May 1991 in southern provinces during the Iraq's Uprising (the first popular revolt against dictatorship that preceded all Arab-Springs by 2 decades), 180,000 Kurds massacred during the 1980s "Anfal campaign", and the appalling torture practised in the most notorious police state of modern times.

Men such as Chalabi who pushed for war against Saddam undoubtedly made many mistakes, but lacking moral clarity in the face of tyranny was not one of them.

This clarity gave him the strength to operate amid a maelstrom of conflicting agendas. Among those joining his Iraqi National Congress (INC) was the former head of Iraqi military intelligence Wafiq al-Samarrai, as well as friends capable of bringing down the tyrant who were factionally divided (the Iraqi Kurds.) Other allies were pious religious leaders, sceptical CIA representatives, naive Pentagon officials and Iranian intelligence infiltrators. All offered support to end tyranny, but who could be trusted?

Chalabi had notable success managing these allies against desperate odds, and on many occasions his INC were credited as the peacemakers holding rival Kurdish factions together following the bitter Kurdish in-fighting of the mid-1990s.

In 1995 it was far worse, as the Kurdish Democratic Party (KDP) withdrew from an attempt to attack the regime at the last minute. A year later, the KDP sided with Saddam in a disaster that saw the CIA lose faith in Chalabi and see the deaths of hundreds of INC fighters in the Kurdish region of Iraq.

Incredibly, Chalabi bounced back in Washington, rebuilding political momentum to influence President Bill Clinton to pass the 1998 Iraq Liberation Act, which cemented support for the INC. But it still wasn't enough to shake the foundations of Saddam's tyranny.

Throughout this time, Iraqi opposition figures saw their people endure immense suffering and destruction (not to mention appalling sanctions). Some say Chalabi helped push the United States to war. But Chalabi was already in a long war with Saddam, one that the United States supported in the 1990s, only far more in word than in deed.

Chalabi knew that cultivating relations with the Republicans was essential not just for the goal of removing Saddam, but merely so that the opposition project could survive. And survival was key: upwards of 500 mass graves were discovered in Iraq after 2003.

But did Chalabi manipulate the entire Bush administration? Paul Wolfowitz, a key figure pushing for tougher action on Saddam, was personal friends with prominent Iraqi dissident and author Kanan Makiya and pro war thinker Christopher Hitchens - these men didn't need defectors with WMD stories to know that a genocidal dictator had to go. That was U.S. policy from 1991 onwards when Bush senior asked the CIA to "create the conditions for Saddam's removal." So, the "master manipulator" portrayal is also exaggerated.

But as the centrepiece of the Iraq opposition, and after much fumbling from the Clinton administration, Chalabi was instrumental in making the project feasible. Without that role, Saddam or his deranged sons would still be in Baghdad.

Imagine being faced with such a task, based only a few miles from a dictator who had already poisoned the Kurdish region with chemical weapons. Chalabi had to allay the fears of defected Baathist officers, divided Kurds and Shi'a opposition groups who knew the U.S. had abandoned them before to Saddam's killing machine.

But while Chalabi's contemporaries in this dark period schemed -- and in the case of KDP leader Masoud Barzani, temporarily joined forces with Saddam, Chalabi's aim was singular: to end a regime that had murdered hundreds of thousands of people, caused one of the bloodiest wars post WW2 with Iran that left two million dead and wounded, forced three million into exile, and at one point planned to fire VX chemical missiles into Tehran, which would have killed tens of thousands of civilians.

Chalabi reached his goal, but soon felt betrayed by the broken U.S. promise to hand over power to Iraqis and hold a democratic election as soon as possible. Chalabi sat almost powerless in the interim governing council, just as Paul Bremer unleashed a series of lamentable mistakes upon the Iraqi people. Just as many people would in this situation, he deepened ties to Iran, but never gave up on his hope of a united, democratic Iraq.

Despite coming close to the political wilderness in 2006, Chalabi followed a more conciliatory role in Iraqi politics than people give him credit for, bringing disparate Shi'a groups together into the National Alliance (including the Sunni Iraqi Accord Front and the Kurdish Alliance) which energised Iraqis to vote in the 2005 elections.

This brings us to another historically divided view of the man: Chalabi the sectarian champion of de-Baathification. This is always a strange accusation, given the quasi fascist nature of the Baath, which had embedded itself in Iraq's institutions through decades of coercion and intensive propaganda. Just as in Germany's de-Nazification after WW2 to uproot the former regime's ideology, Iraq's institutions had to be rehabilitated. The fact that the project was ultimately hijacked to become a politicised witch hunt is no fault of Chalabi.

Despite accusations of sectarianism, it was Chalabi who once took Iraqi Sunnis to the Shi'a Holy Shrine of Imam Ali at the height of sectarian violence in 2006.

The misrepresentation continues: Chalabi the "convicted fraudster" following the Petra Bank scandal, which ignores the fact that the "court" who tried him was a military tribunal. It was a highly controversial case with strong reasons to believe political motivations were behind the charges.

These allegations jar with Chalabi's last role in Iraq, vigorously chasing corruption during his active role in parliament and most recently as head of the Finance Committee despite the immense danger of such a job, leaking information on scandals to local and international media.

That's the Chalabi I remember: in our meetings, he was always deeply concerned by corruption and mismanagement in Iraq and abuse of the dollar auctions. He talked about how past administrations lost the golden opportunity of high oil prices whilst failing to diversify Iraq's economy and income streams.

During our last telephone conversation in October, he asked me for advice on Iraq's debts to oil companies and market forecast while working on the 2016 budget. Despite the financial and security challenges Iraq faced, he always talked with a strong belief that "one day, our country, would become a civil state headed by competent technocrats and more responsible administrations." He remained influential to the end and deeply passionate about his country.

No doubt historians will continue to debate the complex episodes of his life, but many Iraqis are deeply fond of the man and in his passing, it seems his legend will grow. He received nothing less than a state funeral and astonishingly, a final resting place in al-Kadhimiya Holy Shrine, perhaps the ultimate endorsement of Iraq's religious Marjiyah establishment, a fitting end to an epic life. This honour is unprecedented for a liberal Iraqi politician who laid the cornerstone for a democratic, civil Iraqi state. Chalabi fought many battles, but that was his final victory.