Talking is in Vain when Taliban aspires to make its chief Mullah Fazlullah, the caliph of Pakistan under a suzerain in Afghanistan, Mullah Omar, the Amirul-Momineen of a universal state

Peace negotiators hadn’t yet stopped high-fiving when the talks collapsed after a Taliban-claimed attack killed 13 policemen in Karachi. Pakistan says that by talking to a Pakistani panel of negotiators, the Taliban has recognised the constitution of Pakistan; the Taliban says Pakistan has de facto lifted its ban on Tehreek-e-Taliban Pakistan (TTP) by officially talking to its panel. 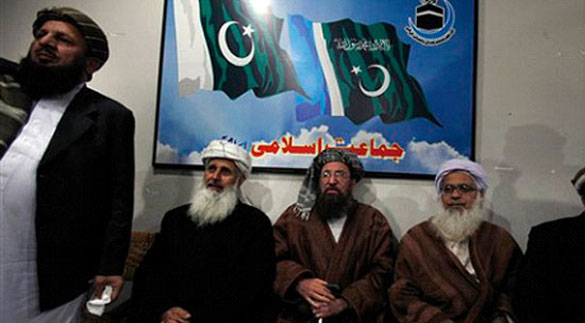 As if to rebut the Pakistani assumption, the Taliban spokesperson, Shahidullah Shahid, says the Taliban aspires to making its chief, Mullah Fazlullah, the caliph of Pakistan under a suzerain in Afghanistan, Mullah Omar, the “Amirul-Momineen” of a universal state that will come into being after the Taliban’s triumphal return to the throne of Kabul. One of the Taliban negotiators, Maulana Abdul Aziz of the rebellious Lal Masjid fame, has made the constitutional state of Pakistan shake in its tracks by saying: “the Taliban are most interested in implementing Sharia law in Pakistan” and that the US military presence in Afghanistan was “a very small factor” in the fight.

While the two sides talk and constantly “break” news to TV channels that the chances of success are bright, terrorist attacks have continued at the rate of one a day since the government announced the talks — the human casualty figure is eight innocent Pakistanis dead a day. Of course, the Taliban denies it is killing while talking, despite its signature on every incident. But last week, it broke the Pakistani heart by actually claiming that it had 13 police commandos, employed at INR 700 per month, killed in Karachi.

Instead of questioning the TTP on its double dealing, pro-talks politicians accept that the terrorists could not kill after they had given their pious word, and blame the “foreign hand”, which doesn’t want peace in the country. An official has dutifully announced that Islamabad was crawling with Khad and Mossad spies; another has allegedly arrested an Indian spy near the saintly shrine of Data Darbar of Lahore. Politicians fulminate against Blackwater and other elements to whom America has outsourced the job of scuttling peace talks. So while peace-loving Pakistan and the TTP engage in talks, Israel, India and the Karzai government, led by the US, were killing innocent Pakistanis, including, ironically, Christians. Clerics, wielding clout by reason of their well-funded madrasas, reject the Taliban’s recourse to terror but feel empowered by their challenge to the “pagan” state and are fulminating against the “obscenity of culture” and “nudity of women”, the latter reference being to unveiled women out shopping among men.

The world may feel faint in disbelief but in Pakistan, there is a consensus over this galloping narrative of the “wrong war”. The consensus is so strong that even those who know better will go on TV saying Pervez Musharraf committed a blunder by accepting UN Security Council Resolution 1373 under Chapter VII of the UN Charter and joining the war on terrorism. Only, they omit mentioning the unanimous resolution un-vetoed by China, after refusing which an already economically challenged Pakistan would have suffered sanctions, perhaps including invasion.

There is an unconscionable conflation of the 2001 US-led invasion of Afghanistan under a UN resolution, which Pakistan accepted, with the 2003 US-led invasion of Iraq without a UN resolution, which Turkey refused to join, to whip the populace into self-flagellation over how Turkey was more of a “man” than a Pakistan led by the chicken-hearted Musharraf, who must now be hanged post-haste by an itching judiciary.

Prime Minister Nawaz Sharif had tested the bomb in 1998 thinking Pakistan would soar to new heights after becoming a nuclear power, only to see padlocks on the Karachi stock exchange the following day. Sanctions were clamped and the national economy went belly-up when Musharraf thought of overthrowing the government. But he was on thin ice when 9/11 happened, planned by al-Qaeda in Pakistan and executed, author Akbar Ahmed tells us, by the Yemeni tribesmen of Saudi Arabia, who visited Pakistan to go up to Afghanistan and meet fellow tribesman Osama bin Laden, before betaking themselves to the World Trade Centre.

The US asked Kabul to hand over bin Laden, but Mullah Omar refused, some say, on Pakistani bidding. Washington was in an ugly mood after having been snubbed by the Taliban government. It threatened Pakistan, knowing there were a whole lot of “surprised” Pakistani agents bunched up in Kunduz in the north of Afghanistan, helping Kabul tame the non-Pashtun population of Mazar-e-Sharif, who would need evacuation. There were also other reasons why Musharraf got cold feet.

This is what an observer wrote about the UN resolution after 9/11: “The resolution passed on September 28, 2011 was among the most radical of all UN resolutions ever considered. Security Council Resolution 1373 called on states to freeze terrorist financing, pass anti-terrorism laws, prevent suspected terrorists from travelling across international borders and order that asylum seekers be screened for possible terrorist ties. It did this all under the rubric of Chapter 7 of the UN Charter, thereby making these dictates binding under international law. This is where it was a step farther than the Security Council had ever gone before.

Musharraf may also have caved because of the American “option” of India as the UN forces’ launching pad, easily winning his India-hating commanders’ approval. However, by agreeing to fight against the warriors Pakistan had originally unleashed in the region as an “asymmetric proxy”, Musharraf got many undeserved concessions we can condemn only on the basis of terrorism-induced hindsight in 2014. By joining the war on terrorism, Pakistan got some of its debt written off, massive amounts of debt repayment rescheduled and was able to come out of the curse of the Pressler sanctions and go back to the familiar condition of lapping up new military hardware in an increasingly primitive cross-border warfare ambience in which the “soldiers of Islam” were replacing the modern fighter.

Musharraf sacked the “Jihadi” generals who didn’t want to fight the American war against elements they had helped spawn. In return, he got a buoyant economy growing at the rate of 7 per cent of the GDP that people today remember as a temporary utopia, when food was plentiful and one could buy a car with a cheap bank loan. From an unthinking commando who blundered into Kargil, he became a statesman normalising relations with India, which the rulers that followed him — Zardari and Sharif — were not allowed to do.

Pakistan wants to fight the Taliban, but it doesn’t have the capacity to do so. Imran Khan says the army told Sharif last year that chances of success against them were 40 per cent — that is, defeat — and nuclear Pakistan hates a scared outside world too much to accept help.