From Indonesia, A Muslim Challenge To the Ideology of The Islamic State

JAKARTA, Indonesia — The scene is horrifyingly familiar. Islamic State soldiers march a line of prisoners to a riverbank, shoot them one by one and dump their bodies over a blood-soaked dock into the water.

But instead of the celebratory music and words of praise expected in a jihadi video, the soundtrack features the former Indonesian president, Abdurrahman Wahid, singing a Javanese mystical poem: “Many who memorize the Quran and Hadith love to condemn others as infidels while ignoring their own infidelity to God, their hearts and minds still mired in filth.” 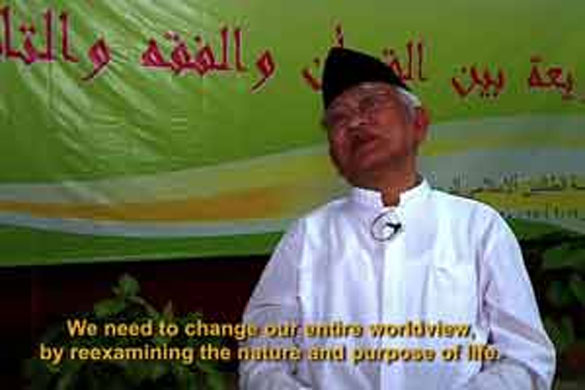 Photo: A. Mustofa Bisri, the spiritual leader of Nahdlatul Ulama, an Indonesian Muslim organization that claims more than 50 million members, in the film “Rahmat Islam Nusantara” (The Divine Grace of East Indies Islam).

That powerful scene is one of many in a 90-minute film that amounts to a relentless, religious repudiation of the Islamic State and the opening salvo in a global campaign by the world’s largest Muslim group to challenge its ideology head-on.

The challenge, perhaps surprisingly, comes from Indonesia, which has the world’s largest Muslim population but which lies thousands of miles away from the Islamic State’s base in the Middle East.

“The spread of a shallow understanding of Islam renders this situation critical, as highly vocal elements within the Muslim population at large — extremist groups — justify their harsh and often savage behavior by claiming to act in accord with God’s commands, although they are grievously mistaken,” said A. Mustofa Bisri, the spiritual leader of the group, Nahdlatul Ulama, an Indonesian Muslim organization that claims more than 50 million members.

“According to the Sunni view of Islam,” he said, “every aspect and expression of religion should be imbued with love and compassion, and foster the perfection of human nature.”

This message of tolerance is at the heart of the group’s campaign against jihadism, which will be carried out online, and in hotel conference rooms and convention centers from North America to Europe to Asia. The film was released Thursday at the start of a three-day congress by the organization’s youth wing in the Central Java city of Yogyakarta.

As world leaders call for Muslims to take the lead in the ideological battle against a growing and increasingly violent offshoot of their own religion, analysts say the group’s campaign is a welcome antidote to jihadism.

“I see the counternarrative as the only way that Western governments can deal with the ISIS propaganda, but there’s no strategy right now,” said Nico Prucha, a research fellow at King’s College London, who analyzes the Islamic State’s Arab-language online propaganda.

And Western leaders often lack credibility with those most susceptible to jihad’s allure. “They don’t speak Arabic or have never lived in the Muslim world,” Mr. Prucha said.

The campaign by Nahdlatul Ulama, known as N.U., for a liberal, pluralistic Islam also comes at a time when Islam is at war with itself over central theological questions of how the faith is defined in the modern era.

In a way, it should not be surprising that this message comes from Indonesia, the home of Islam Nusantara, widely seen as one of the most progressive Islamic movements in the world. The movement — its name is Indonesian for “East Indies Islam” — dates back more than 500 years and promotes a spiritual interpretation of Islam that stresses nonviolence, inclusiveness and acceptance of other religions.

Analysts say the theology developed organically in a place where Hinduism and Buddhism were the primary religions before Islam arrived around the 13th century. Indonesian Islam blended with local religious beliefs and traditions, creating a pluralistic society despite having a Muslim majority.

Indonesia today has more than 190 million Muslims, but also has a secular government and influential Christian, Hindu and Buddhist minorities.

Such liberalism poses a counterargument to the Islamic State, analysts said.

“We are directly challenging the idea of ISIS, which wants Islam to be uniform, meaning that if there is any other idea of Islam that is not following their ideas, those people are infidels who must be killed,” said Yahya Cholil Staquf, general secretary to the N.U. supreme council. “We will show that is not the case with Islam.”

N.U. has established a nonprofit organization, Bayt ar-Rahmah, in Winston-Salem, N.C., which will be the hub for international activities including conferences and seminars to promote Indonesia’s tradition of nonviolent, pluralistic Islam, Mr. Yahya said.

N.U. is also working with the University of Vienna in Austria, which collects and analyzes ISIS propaganda, to prepare responses to those messages, which N.U. will disseminate online and at conferences.

Get news and analysis from Asia and around the world delivered to your inbox every day in the Asian morning.

A prevention center based in Indonesia, expected to be operational by the end of the year, will train male and female Arabic-speaking students to engage with jihadist ideology and messaging under the guidance of N.U. theologians who are consulting Western academia.

The film, “Rahmat Islam Nusantara” (The Divine Grace of East Indies Islam), has been translated into English and Arabic for global distribution, including online. The film explores Islam’s arrival and evolution in Indonesia, and includes interviews with Indonesian Islamic scholars.

In scene after scene, they challenge and denounce the Islamic State’s interpretations of the Quran and the Hadith, the book of the Prophet Muhammad’s teachings, as factually wrong and perverse.

The Islamic State’s theology, rooted in the fundamentalist Wahhabi movement, takes its cues from medieval Islamic jurisprudence, where slavery and execution of prisoners was accepted. The filmmakers accept the legitimacy of those positions for the time but argue that Islamic law needs to be updated to 21st-century norms.

Other sects and Muslim leaders have made this argument before. And non-Arab countries like Indonesia tend to have less influence on the practice of Islam, especially in the Middle East.

“The problem with Middle East Islam is they have what I call religious racism,” said Azyumardi Azra, an Islamic scholar and former rector of the State Islamic University in Jakarta. “They feel that only the Arabs are real Muslims and the others are not.”

Saudi Arabia, the birthplace of Islam and the main source of financial support for Wahhabism worldwide, has had more success in imposing its interpretation and has even made inroads in Indonesia. Analysts say a steady flow of money from Persian Gulf countries, including Saudi Arabia and Qatar, supports an active and growing Wahhabist movement here.

There are also reservations here about the N.U. going global, rather than first tackling violent extremism at home. Indonesia has suffered several deadly terrorist attacks by Islamic militants in recent years that have killed hundreds, including bombings on the resort island of Bali in 2002 and 2005, and at five-star international hotels in Jakarta in 2003 and 2009.

The best known of the Indonesian jihadi groups, Jemaah Islamiyah, a onetime Southeast Asian branch of Al Qaeda, has been crushed, but splinter groups still exist, as well as other militant Muslim groups like the Islamic Defenders Front, which occasionally smash up bars and attack religious minorities and their houses of worship.

Bonar Tigor Naipospos, vice chairman for the executive board of the Setara Institute for Democracy and Peace in Jakarta, said N.U.’s campaign applied equally to local radicals.

“They want to show to Indonesian society, ‘Look, we are Islamic and we have universal values, but we also respect local cultures,’” he said. “We are not like Islam in the Middle East.”

Others say the international public discourse has to start somewhere, even if it is thousands of miles away from Syria and Iraq.

Hedieh Mirahmadi, president of the World Organization for Resource Development and Education, an organization based in Washington that works to combat extremism, said that, according to open source data, supporters of the Islamic State were sending an average of 2.8 million messages a day to their followers on Twitter.

“Who’s going to counter that?” she asked.

“It’s what they are doing in Indonesia, it’s what we are doing in the U.S., and in other places,” she said. “You flood the space, and you hope people get the right messages.”