Protesters across Iraq Demanding Sovereignty and an End to Iranian Meddling, But US Intervention Is Not the Answer

Tehran’s aspirations of establishing regional hegemony in the Middle East rest atop the continued status of Iraq as a militarily weak and politically malleable client state. Now, amid staggering levels of anti-Iran demonstrations across the country, the Iraqi people have a genuine shot at ejecting Tehran’s invasive political influence and creating a truly sovereign Iraqi state. 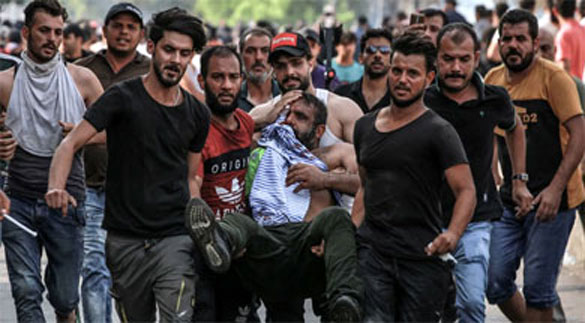 01 October 2019, Iraq, Bagdad: Demonstrators carry an injured man during a demonstration against corruption in government and political stalemate of the Tahrir Square. In Iraq, the population is frustrated by the poor infrastructure and unemployment, among other things. Photo: Ameer Al Mohammedaw/dpa

Yet as antipathy toward Iran continues to build across Iraq, the Islamic Republic isn’t going to cede its stranglehold over the country easily.

The “Shia Crescent” concept is vital to understanding the political sentiments engulfing Iraq. In late 2004, King Abdullah of Jordan coined the idea of the Shia Crescent, a regional vector of militant Shia influence radiating outward from three key Shia-dominated government centers: Damascus, Tehran and Baghdad. As Iranian power grew in the region over the last decade, the Shia Crescent manifested itself and is now a reality on the ground. It remains relevant to both contemporary US foreign-policy making and broader Middle Eastern power dynamics.

Outside of Baghdad, the activities of Shia-backed organizations and state-sanctioned militia groups remain contested. Nevertheless, after the defeat of the Iraqi branch of Islamic State (ISIS) and the subsequent withdrawal of the bulk of US military forces, Iran has become increasingly audacious in its efforts to embed political and strategic influence in Iraq. Using a mixture of subterfuge and well-financed political support, Iran has cultivated considerable political influence along the initial arc of the Shia Crescent.

Since consolidating key bastions of soft power in Baghdad, Iran has also commenced an expansion of its hard-power presence in the Iraqi countryside, using the Quds Force, an elite unit of the Islamic Revolutionary Guard Corps (IRGC), to occupy small pockets of geo-strategically valuable land and establish semi-official (read: plausibly deniable) military bases. In addition to cementing Iran’s authoritarian grip over Baghdad, this strategy provides Tehran with a way of entrenching the Shia Crescent across Iraq and directly exporting influence and military assets deeper into Syria and Lebanon.

Curtailing Iraqi sovereignty and military capabilities have been Iran’s primary foreign-policy objectives since the Iran-Iraq War ended in 1998. In addition to fomenting a general state of “just enough” anarchy and conflict, Iran – working through Shiite scholars and clerics, bankrolled government officials, and IRGC operatives – has made a concerted effort to undermine Iraqi bureaucracy and policymaking mechanisms. Unfortunately, the rot planted by Iran has since overtaken much of Iraq’s political system, promoting a culture where graft, misuse of government power, influence peddling, bribery and cronyism are all accepted as business as usual.

As if it’s not enough for Iran to suffocate Iraq’s legitimate channels of governance, Iraqi protesters have also had to contend with violent, Iran-backed Shia militias. These state-sponsored militias fulfill a variety of formal and informal roles for pro-Iran elements in the Iraqi government, from instilling terror in Sunni communities to brutally quashing anti-government demonstrations.

Many of these militias, such as Asaib Ahl al-Haq, are brazen creations of the IRGC and in effect operate as powerful political factions within the Iraqi parliament. The Popular Mobilization Forces (PMF), a Shia-majority paramilitary force, has been repeatedly implicated in war crimes and the sectarian repression of both Sunni and Shia protest groups. On January 3, the head of the PMF, Abu Mahdi al-Muhandis, was killed in the targeted US drone strike alongside Qasem Soleimani.

Although independent protest groups appear to be largely decentralized, Iraq’s protest movement broadly coalesces around three pro-sovereignty demands: the overthrow of the current administration, the absolute expulsion of Iranian special interests, and the establishment of an independent political system that isn’t riven with sectarian divides.

The ambitious goals of pro-sovereignty outcomes are acutely attainable, especially if the scale and intensity of the protests continue to grow at the current rate. The protests have already impelled both prime minister Adil Abdul-Mahdi and President Barham Saleh to offer their resignations – how much longer can Iraq’s major parliamentary voting blocs refuse to offer concessions without inviting backlash from increasingly choleric demonstrators?

Another important consideration is the growing levels of support for protesters among prominent Shiite thought leaders. In particular, Ayatollah Ali al-Sistani, a man widely held to be the most powerful clerical figure in Iraq, recently delivered a sermon denouncing government security forces and urging Interim Prime Minister Ayad Allawi to dissolve the current parliament and form a brand-new sovereign government, one that is both representative of protester demands and free of Iran’s authoritarian influence.

Political groups also seem to be singing the same tune. The National Independent Iraqi Front, a non-sectarian group that is led by both Sunnis and Shias, shares the protesters’ demands and is growing in popularity for its anti-Tehran, Iraqi-nationalist messaging. Likewise, Ammar al-Hakim, once persecuted by Saddam Hussein, has returned to form the pro-sovereignty National Wisdom Council. The Sovereignty Alliance for Iraq (SAI) considers itself an umbrella organization for the pro-sovereignty parties in Iraq.

US Intervention Will Not Build A Sovereign Iraq

As civil disobedience builds across Iraq, commentators will inevitably begin calling for the US to leverage its domestic and regional influence in favor of the protesters. This may be a mistake. The US and the wider international community should absolutely signal their unconditional support for the right of peaceful demonstration, however, any backing beyond such a statement would be excessive and would risk a deepening in the involvement of US military and diplomatic assets. If the Iraqi people are to establish lasting sovereignty, they need to do it with as little foreign assistance as possible.

After Ayatollah al-Sistani’s sermon, Iraq’s anti-government protests are expected to hit a new high in momentum. If the government caves to the demonstrators and agrees to partial or complete dissolution, Iraq will need an international partner that can help it realize the first stages of forming a sovereign state. Foremost among these initial steps will be providing the Iraqi people with the concessions they’ve been fighting for and repairing the country’s crippled economy. The US can assist in developing democratic institutions and drafting financial regulations, but ultimately the people of Iraq must find a leader and party that are committed to building real, long-term Iraqi sovereignty without compromising on anti-sectarianism and economic stability.

If this vision is to become a reality, the pro-Iran political apparatus pervading the Iraqi government must be completely re-engineered. Instead of kowtowing to Iranian interests, the Iraqi political system must both prioritize national sovereignty and seriously re-engage with the protest movement currently sweeping across the country’s war-torn cities and towns.