Obituaries of the Arab spring are blossoming in the heat of the unremittingly grim events in Syria, Egypt and Libya so it is timely to take a cool look at a part of the Middle East where the upheavals of 2011 never really happened — and to try to understand just why the Gulf is different.

Saudi Arabia has been in the news because of its staunch support for the military-backed government in Cairo – part of its wider strategy of resisting the Muslim Brotherhood and rolling back change. But closer to home the Saudis also back Bahrain's Al Khalifa rulers, a Sunni dynasty facing down protests by the island state's Shia and democratic opposition. 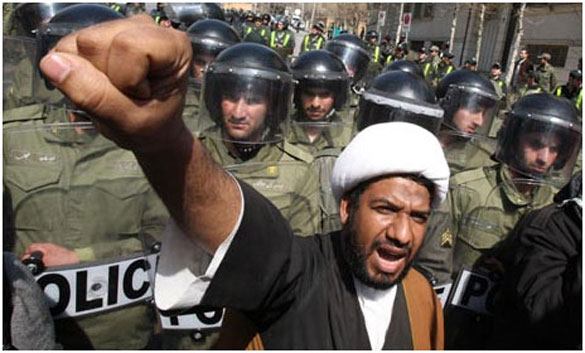 A Bahraini Shia cleric chants slogans during a protest in front of the Saudi Embassy in Tehran Photograph: Vahid Salemi/AP

Toby Matthiesen's new study of the Gulf counter-revolutions demonstrates how the Saudis, Bahrain and Kuwait have all combined repression and cash handouts with an almost instinctive sectarianism to keep demands for reform at bay.

The Saudis had long fretted about unrest in their predominantly Shia eastern province — the heartland of the kingdom's oil industry. But when republican dictators were being toppled in Tunis, Cairo and Tripoli and revolution was in the air just across the Gulf in Manama, anti-Shia feeling was ratcheted up with the mass arrests of local activists who were accused of being part of a "foreign conspiracy." It was supposedly led by Iran, but beyond shrill propaganda from Tehran and dark hints about "sleeper cells," there is no evidence of that.

Matthiesen, an Arabist who had worked for the highly-respected International Crisis Group, blurs the boundaries between journalism and academia with nuggets of vivid reportage and background knowledge that translates obscure historical legacies into comprehensible contemporary terms. (Anti-Shia prejudice is akin in some ways to hostility to Catholics in Protestant culture). And the Gulf monarchies, as he puts it, "think strategically in sectarian terms, and shape their foreign policies in those terms."

In the end however it is more about power than faith. Matthiesen observes that the official discourse surrounding the alleged meddling of (the Shia) Iranian state and the transnational (Sunni) Muslim Brotherhood is actually very similar. And these allegations, he concludes, "are often about finding a scapegoat to deflect attention to an external enemy." Saudi policy towards Bashar al-Assad — still one of the more opaque aspects of the Syrian crisis — includes the encouragement of vicious anti-Alawi rhetoric from Gulf-based Sunni clerics. (Alawis are an offshoot of Shi'ism). In Kuwait, official prejudice is directed against the Brotherhood (as it is, in spades, in the UAE), as well as the tribes and the stateless Bidoon.

Factors pushing for internal change include demographic pressures, labour markets that can no longer provide jobs for underperforming citizens with a sense of entitlement, dwindling oil resources and demands for political reform. But unlike Christopher Davidson, author of a recent much-discussed work on the future of the region, Matthiesen does not predict that any of the Gulf regimes face collapse any time soon.

Nor does he use the fashionable and superficial labels of Twitter or Facebook revolutions, arguing that brute force can be more effective than even the smartest digital technology.

Social media are a good way to organise revolution, sometimes. But guns and tanks are very effective tools to stop revolutions, particularly if...the soldiers are loyal to the regime and international pressure on the regime is limited.

Limited is the right word. Arguments about securing oil supplies, confronting Iran, arms exports and stability have all trumped western concerns about human rights and democracy in all the Gulf monarchies — as will surely be seen in a forthcoming report on UK relations with Bahrain and Saudi Arabia by a British parliamentary enquiry. As David Cameron put it in 2011: "Bahrain is not Syria" — a shorthand way of explaining why King Hamad Al Khalifa is still persona grata in Downing Street (and the White House) while Assad is not. Syria, meanwhile, has turned out to be a different sort of exception. But that's another story.