The Plight of Pakistan’s Shiites: Regulating Motorcycles And Phone Use Won’t Save Lives Where Sectarianism Thrives

LONDON — Muharram, the first month of the Islamic calendar, is one of four sacred months during which fighting is prohibited. In Pakistan, it is usually one of the bloodiest. Sectarian militant groups see it as the perfect opportunity to target Shiite Muslims, who mark Muharram with daily sermons and frequent processions. 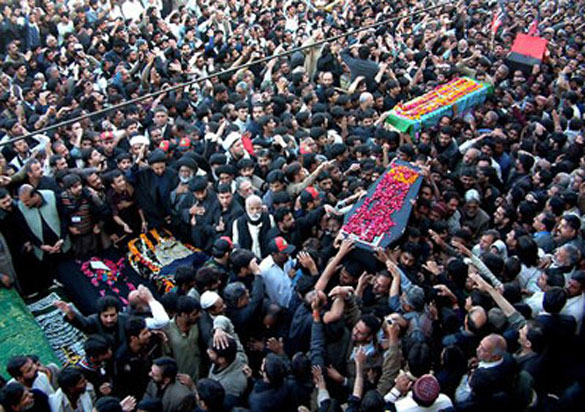 Sectarian attacks have intensified across the country since the holy month started last week. On Monday, a bomb blast at an imambargah (a Shiite mosque or congregation hall) in Karachi claimed two lives. On Wednesday, five people were killed and 11 wounded in back-to-back blasts near another imambargah in Karachi. That same night, 23 people were killed and more than 60 wounded when a suicide bomber attacked a procession in Rawalpindi. Meanwhile in Peshawar, the police seized a large quantity of explosive material and arrested a would-be suicide bomber.

This violence is not new. My home in Karachi is down the road from an imambargah, and each year brings more elaborate security arrangements: policemen with flashlights have gradually given way to razor wire, road blocks, armed guards, concrete barriers, and even bunkers.

This year, the road has been completely blocked to traffic since the start of Muharram. And yet the violence could still intensify, especially on the 9th and 10th days of Muharram — this year, Nov. 24 and 25 — the special days of remembrance known as Ashura, which are observed with public mourning, processions and sermons.

The situation has been made worse by the Pakistani government’s half-hearted and hapless efforts to tackle sectarian militancy. Last week, anticipating attacks, the government suspended cell phone service in Karachi and Quetta, capital of the western province of Baluchistan, to block coordination among militants. Interior Minister Rehman Malik also pushed for a temporary ban on motorcycles, the bombers’ vehicle of choice. (But millions of middle-income Pakistanis also use bikes, and so the courts blocked the measure, except along procession routes during Ashura.) Malik has also managed to prohibit cars and motorcycles across Sindh and in Quetta from parking within 1,000 yards of any imambargah — a tall order in a city as densely populated as Karachi.

Following this week’s attacks, 100 C.C.T.V. cameras were installed to monitor processions in Karachi (at a cost of 50 million rupees, or $520,000). The Pakistani Army will probably be standing by. And cellphone services are likely to be suspended again in the provinces of Sindh and Baluchistan.

Yet the fuss over motorcycles and mobile phones is ridiculous given the government’s failure to address the root causes of sectarian violence. Although anti-Shiite militant groups like Lashkar-e-Jhangvi and Ahle Sunnat Wal Jamaat (A.S.W.J.) are officially banned, they nonetheless broadcast their hateful views through sermons and at rallies. They operate throughout the country with minimal government interference. And their message is starting to resonate: According to a recent Pew poll, only 50 percent of Pakistani Sunnis accept Shiites as Muslim.

Worse, politicians blatantly seek their support. In 2010, Rana Sanaullah, a member of the opposition PML-N party, campaigned for a local election in Punjab alongside Maulana Muhammad Ahmed Ludhianvi, leader of the A.S.W.J. This past February, members of the party of the cricketer-turned-politician Imran Khan shared a platform with the Defense of Pakistan Council, a coalition of 40 extremist organizations, including many anti-Shiite groups.

About 425 people have been killed in 149 sectarian attacks this year, primarily Shiites at the hands of Sunnis. The Hazara ethnic minority, mostly Shiites who live in Baluchistan, is especially vulnerable.

Despite the escalating violence, the government has made too little effort to root out militancy. The National Counter Terrorism Authority, founded in 2009 to develop a holistic strategy against domestic terrorism, is ineffectual. And where sectarianism thrives, regulating motorcycles and phone use won’t save lives.