Pakistan Remembers Its Sufi Saints Fondly But Why Has It Forgotten Their Progressive Values? 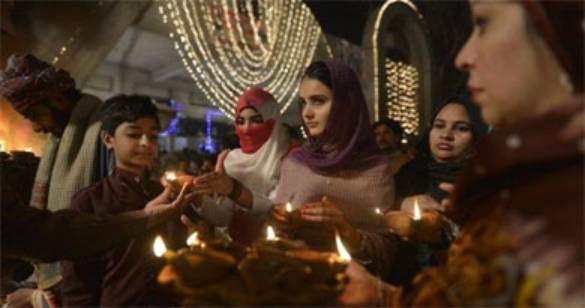 Devotees light candles around a fire at the shrine of Sufi saint Hazrat Shah Hussain, during the annual festival Mela Chiraghan (the festival of lights) in Lahore. | Arif Ali/AFP

There is a popular myth about how 16th-century Sufi poet Shah Hussain entered the world of mysticism.

As a young boy, Shah Hussain used to lead the Tarawi prayers – a special prayer offered every night during Ramazan where the entire Quran is recited over the course of the holy month – at the Data Darbar shrine in Lahore. It is said that on one such night, Shah Hussain abruptly walked out of the mosque mid-prayer, leaving behind hundreds of devotees who had been following his lead. The trigger, it is believed, was a verse from the Quran that said God is closer to a believer than their own jugular vein. Shah Hussain realised that if God was so close to him, what was the need to appease the divine through prayers and other rituals?

He then walked straight to a barber and got his beard shaved. Later he headed to a tavern, bought a flask of wine and a Ghungroo, and began dancing and singing in the streets of Lahore. The verses that he composed during his years as an itinerant dervish were memorised by generations of bards after him, immortalising his poetry. After his death, a shrine was built over his grave. In death, he became a saint.

Rebels with a Cause

The story of Bulleh Shah is similar. Born into a Syed family, who claims their lineage directly from the Prophet and are thus accorded high social status, Bulleh Shah also abandoned religious rituals for a more esoteric connection with god. In his poetry, he argued that a devotee kept on searching for the divine in the skies even though divinity resided within them.

Bulleh Shah mingled with the lowest echelons of the society, inviting the disdain of his family members and other associates. But for the saint, caste hierarchy held no significance and he is believed to have claimed that anyone who called him a Syed would burn in hell.

His poetry, critical of dogma and the religious clergy in Islamic as well as Hindu traditions, has outlived him and continues to be sung and recited by members of all classes, castes and religions. His shrine, in the city of Kasur in the Punjab province, is visited by hundreds of devotees every day.

Through their words and deeds, both Shah Hussain and Bulleh Shah reversed the notions of purity and impurity.

Wine is a taboo in the Islamic tradition, but it was one of the first things Shah Hussain acquired after his mystical awakening. By taking up a forbidden act, he wanted to challenge the traditionally held concepts of the pure and sacred. Purity lies within the heart and not within earthly objects, he conveyed.

Bulleh Shah did the same, by visiting the house of a courtesan to learn how to dance. Music and dance are frowned upon in puritanical Islam, both are professions reserved for the so-called lower castes, the Kanjars and Mirasis.

Throughout history, other mystics too put up a challenge to societal concepts of purity. For example, just a little outside the historical city of Chunian is the shrine of Baba Mast, an itinerant dervish who spent his life with the transgender community, which was marginalised and considered impure. The saint Peer Abbas was always accompanied by a pack of dogs, with whom he used to share his food and drink. Traditional Islam holds dogs to be impure, any physical contact with the animal needs to be followed by ritualistic ablution.

But even as their memories lived on, the philosophy of these mystics faded out after their death. At the shrines of Shah Hussain and Bulleh Shah, official caretakers ensure that no woman enters the inner sanctum containing the graves of the saints, lest they be menstruating, a time when they are considered impure. At the shrine of Peer Abbas, dogs are not allowed into the shrine even though its patron saint spent his days in their company.

Today, the guardians of these saints’ memories spend their days upholding the very notions of impurity the mystics dedicated their lives to rebelling against.

Haroon Khalid is the author of three books: Walking with Nanak, In Search of Shiva and A White Trail