It is not often that the international community gets ample notice and an invitation to stop atrocities before they begin. This is precisely what happened earlier this week in Egypt.

General Abdel Fatah al-Sisi, leader of the coup-that's-not-a-coup, gave a speech that has to be read as paving the way for a bloody campaign of repression.

It must be recalled that Sisi's coup has since been revealed in all its glory, a spectacle meticulously choreographed and staged, in production since at least last November. 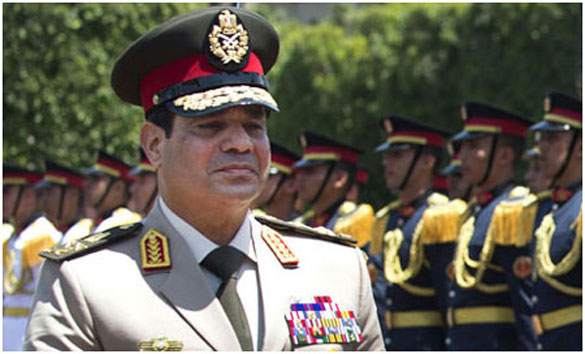 General Abdel Fatah al-Sisi: 'His coup has since been revealed in all its glory, a spectacle meticulously choreographed and staged.' Photograph: Jim Watson/AP

Since the coup it has emerged that the leaders of the armed forces had been meeting regularly with key opposition figures in the months before; that leading Mubarak-appointees on the constitutional court were involved; that financing and logistical support for the "grassroots" movement against Mohamed Morsi came from the opposition's Naguib Sawiris; that the governments of the United Arab Emirates and Saudi Arabia provided aid that promptly materialised upon the ouster of Morsi; that Mohamed ElBaradei, leader of the National Salvation Front, had sought the support of western governments; and that US secretary of defence Chuck Hagel was in contact with Sisi in the days leading up to the coup.

We have also witnessed the miraculous disappearance overnight of fuel and electricity shortages, the equally miraculous return of law enforcement to the streets, and the emergence of key Mubarak regime figures, now representing roughly a third of the interim cabinet.

It has also become clear that the key to the entire affair – the participation of "millions" in anti-Morsi protests – is at best an exaggeration and at worst a piece of cinematic production involving the collaboration of an Egyptian movie director and military aerial photography. In contrast to the 18 days it took the army to step in in 2011, Sisi in this case issued an ultimatum on the first day of protests and followed through with the coup three days later.

The upshot of all of this is that when Sisi calls on all Egyptians to rally "in every public square", and when the general characterises these forthcoming rallies as a "mandate" to fight "violence and terrorism" this has to be seen as paving the way for more military action.

The end game is not very difficult to see. Sisi has already given the world a taste of what he is willing to do when officers opened fire on peaceful protesters during morning prayers. There were at least 50 dead on the spot, possibly as many as a 100 in total.

The violence has continued sporadically since then. And while most news outlets conservatively label the violence as "clashes" between anti-Morsi and pro-Morsi factions, the inescapable facts are that all the deaths have been among those protesting the coup and calling for the return of Egypt's hijacked democracy and that many of these deaths have come at the hands of non-uniformed state agents.

So when the general invokes the code words of confronting "violence and terrorism" reasonable people should expect violence. And it is violence that is being marketed primarily to a western audience using familiar catchphrases and explicitly urging Sissi’s supporters to "show the world" that the military and the police are "authorised" to do just that.

The people who have rallied to the cause of restoring Egypt's democracy have held a sit-in in Rabaa al-Adawiya, one of Cairo's largest squares, away from Tahrir Square, which was the centre of anti-Morsi rallies. They have largely avoided Tahrir in order to avoid precipitating any confrontation between civilians. They have carefully organised their marches to avoid instigating violence. And they have been consistently the victims, not perpetrators, of violence.

By recklessly calling on "Egyptians" to protest in "all the public squares" the general is inviting a civil war. If he gets his civil war he will use the clashes as the pretext to widen the campaign of violent repression against anyone that opposes the coup. If the people do not oblige, media outlets – fully under military control since the 3 July coup – have already begun to accuse the Muslim Brotherhood of responsibility for every act of violence from Sinai to Cairo. And to "confront terrorism" the general will authorise deadly force against the people of Egypt.

We have heard this kind of rhetoric before. Muammar Gaddafi used it in Libya. Bashar al-Assad used it in Syria. Unlike those two regimes, this general is directing his energies at a western audience. Unlike Assad and Gaddafi, this new dictator cares about visits from the US and the EU, cares about joint military exercises with the American army, and cares about the resumption of exports of F-16s.

Unlike Libya and Syria, in Egypt there is still time to act. But for the Egyptian people, that time is running out.