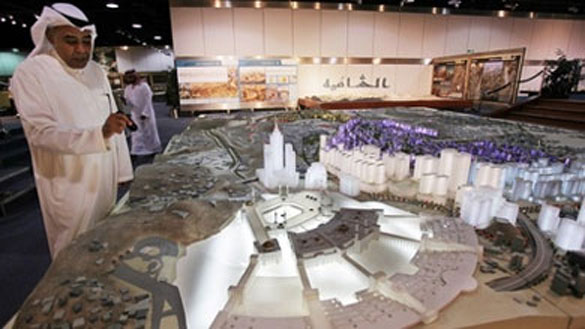 Essam Kalthoum, left, managing director of the Bawabat Makkah Company, which oversees several projects around the city, shows a prototype of what the heart of Makkah, will look like after construction around the Grand Mosque is complete. Photo: AP

As a child, Osama Al Bar would walk from his home past Islam's holiest site, the Kaa’bah, to the market of spice and fabric merchants where his father owned a store. At that time, Makkah was so small; pilgrims could sit at the cube-shaped Kaa’bah and look out at the serene desert mountains where the Prophet Mohammad (PBUH) once walked. 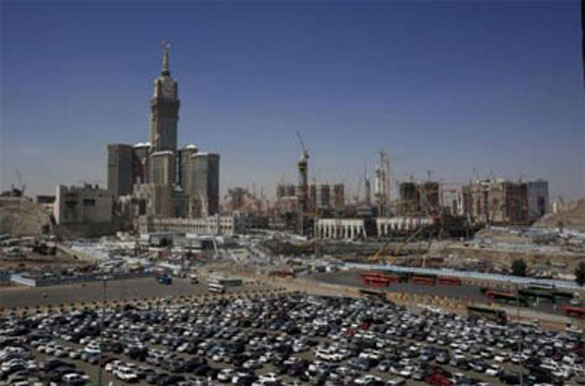 Now the market and the homes are gone. Monumental luxury hotel towers crowd around the Grand Mosque where the Kaa’bah is located, dwarfing it. Steep rocky hills overlooking the mosque have been levelled and are now covered with cranes building more towers in row after row.

"My father and all the people who lived in Makkah wouldn't recognise it," said Al Bar, who is now Makkah's mayor. 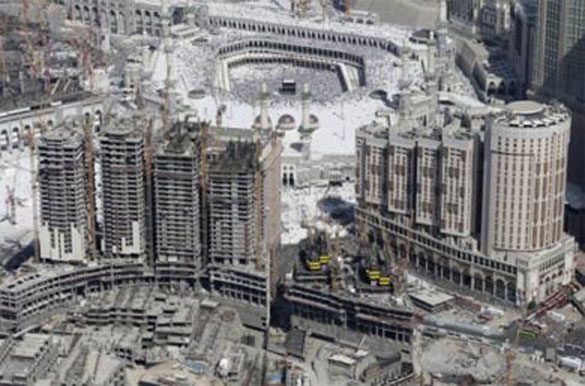 As Muslims from around the world stream into Makkah for the annual Haj this week, they come to a city undergoing the biggest transformation in its history.

Decades ago, this was a low-built city of centuries-old neighbourhoods. Over the years, it saw piecemeal renewal projects. But in the mid-2000s, the kingdom launched its most ambitious overhaul ever with a series of mega-projects that, though incomplete, have already reshaped Makkah. 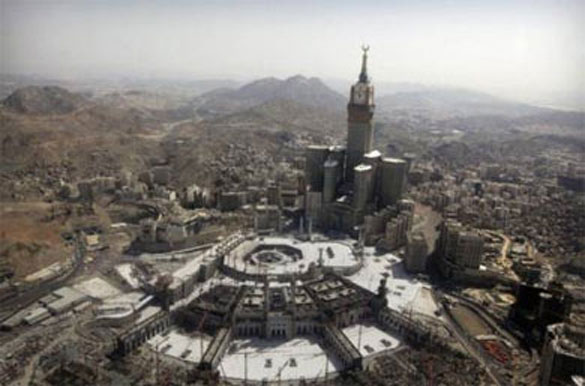 Old neighbourhoods have been erased for hotel towers and malls built right up to the edge of the Grand Mosque. Historic sites significant for Islam have been demolished. Next to the Kaa’bah soars the world's third tallest skyscraper, topped by a gigantic clock, which is splashed with coloured lights at night.

"It's not Makkah. It's Makkah-hattan," said Sami Angawi, an architect who spent his life studying Haj and is one of the most outspoken critics of the changes. 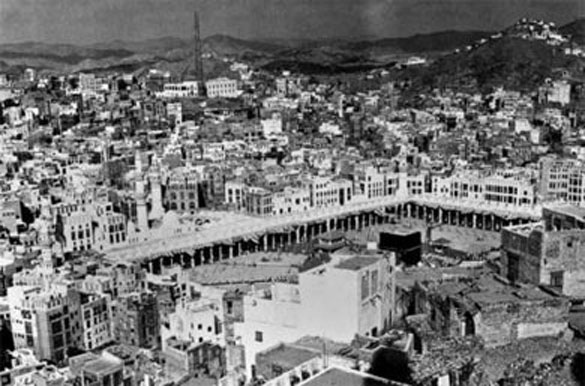 Critics complain the result is stripping the holy city of its spirituality. They also say it is robbing the Haj of its more than 1,400-year-old message that all Muslims, rich or poor, are equal before God as they perform the rites meant to cleanse them of sin, starting and ending by circling the Kaa’bah seven times.

Makkah is revered by hundreds of millions of Muslims worldwide. They face the Kaa’bah every day in their prayers. The Grand Mosque is one of the few places in the world where Muslims of all stripes gather - Sunnis and Shiites, secular Muslims, mystics and hard-liners. 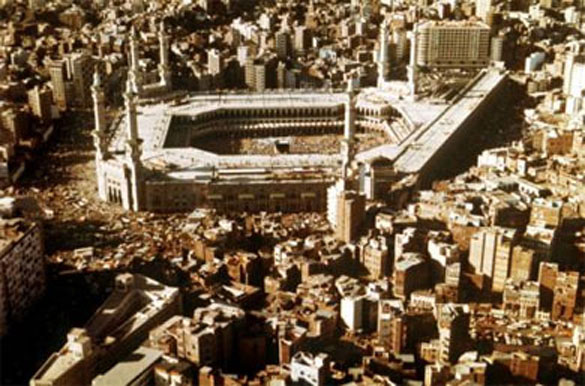 Overseeing Makkah is also a key source of prestige for Saudi Arabia. The past two kings — the current one, Abdullah, and his predecessor, Fahd — have adopted the further title of 'custodian of the two holy mosques', referring to Makkah's Grand Mosque and the Prophet's Mosque in nearby Madina.

Now the city is being moulded to a particularly new vision. Two forces shape that vision. One has Makkah's planners largely catering to wealthier pilgrims by focusing on construction of five-star hotels, surrounding the Kaa’bah in marble-sheathed luxury. Nearby pilgrims can shop at international chains, including a Paris Hilton store and a gender-segregated Starbucks. 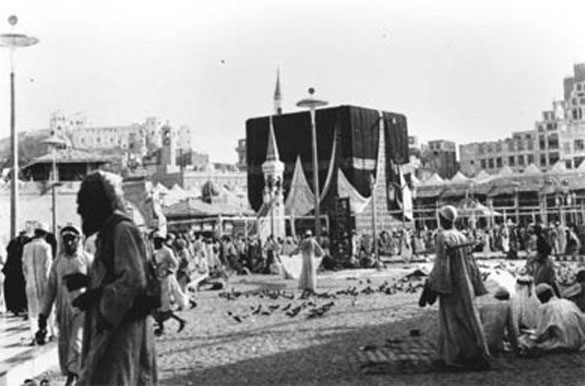 The other force is a strict interpretation of Islam. One tenet of this is that Muslim tombs or sites connected to revered figures — even the Prophet Mohammad (PBUH), his family and companions — should be destroyed to avoid veneration of anything other than Allah. It's the same iconoclastic zeal that has prompted militants from Daesh [Arabic for the so-called "Islamic State"/ISIS/ISIL] to blow up Muslim shrines in Iraq and Syria.

In Makkah, hardly any site associated with Prophet Mohammad (PBUH) remains. Many were destroyed in previous expansions of the Grand Mosque in the 1980s and 1990s, and the new development is finishing off much of what remains. In 2008, for example, the house of Abu Bakr, Prophet Mohammad's (PBUH) successor as leader of the Muslim community, was razed to make way for a Hilton hotel.

The urban renewal is necessary, Saudi officials say, to accommodate Haj pilgrims whose numbers are expected to swell from around three million currently to nearly seven million by 2040.

The $60-billion Grand Mosque expansions will almost double the area for pilgrims to pray at the Kaa’bah. Around half the cost went to buying about 5,800 homes that had to be razed for the expansion, said Al Bar, the Makkah mayor. Domes and pillars dating back to rule by the Ottoman Empire are being pulled down to put up modern facilities.

Another mega-project is Jabal Omar, a hill on the mosque's west side. The hill — a landmark in the city — was levelled and in its place, construction of around 40 towers is under way, mostly for luxury hotels providing some 11,000 rooms. The first of the Jabal Omar hotels, a Hilton Suites and the Anjum Hotel, just opened in the past few months.

On the mosque's south side stands the 600-metre clock-tower skyscraper, part of a completed seven-tower complex that was built after tearing down an Ottoman fort on the site.

Also underway is the Jabal Sharashif project, in which a slum that largely houses Myanmarese and African migrants is to be torn down to build a new neighbourhood for Saudis, along with hotels. A four-line metro system is planned for the city along with a high-speed rail line to the port city of Jeddah, where the area's airport is located, and to Madina.

The Grand Mosque's expansion is being headed by the Saudi Binladin Group, which also built the clock tower. The Bin Laden family has been close to Al Sauds for decades and runs major building projects around the country. Al Qaida's late leader Osama Bin Laden was a renegade son disowned by the family in the 1990s.

Speaking at a public forum in Jeddah in May, Nawaf Bin Laden, whose father is chairman of the conglomerate, said people are constantly asking if all this construction is needed.

"This can be answered in one moment in this image," he said, flashing a picture of tens of thousands of worshippers praying in the street because there was not enough room inside the Grand Mosque.

But many in the audience were not convinced. Saeed Al Gamdi, a former Saudi diplomat, said he thinks greed is the main motivator.

Muslims around the world have an "intimate bond" with Makkah, he said. "It is not a place for one businessman or one company."

Makkah's planners didn't have to build so close to the Kaa’bah, overwhelming the simple cube-shaped structure, said Irfan Al Alawi, who heads the London-based Islamic Heritage Research Foundation. The hotels could have been built miles away and transportation improved.

"Already we are losing the spirituality," he said. Pilgrims admire the clock tower instead of "looking at the Kaa’bah and admiring the house of God."

Essam Kalthoum, managing director of the government-owned Bawabat Makkah Company, which is involved in a number of projects around the city, acknowledged that "it would be a farce" to say financial motivations are not coming into play.

But he said the main goal is to increase space for pilgrims.

Kalthoum showed a gift from a Turkish foundation he had just received: a photo of Makkah from the late 1800s.

"This is painful," he said. "For those of us who witnessed some of this [past], it brings back memories."

But he pointed to the Kaa’bah in the photograph. "Because of this place," he said, the old markets and buildings had to go.