Saudi Textbook Withdrawn Over Image of Yoda with King 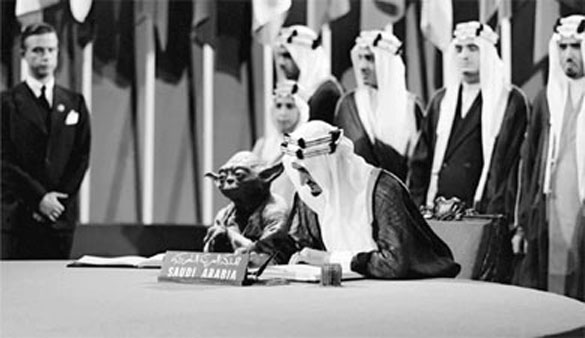 A Saudi artist says he created this montage as an homage to King Faisal and a beloved “Star Wars” character. The setting is the signing of the United Nations Charter in San Francisco in 1945. The artist’s work somehow ended up in a high school social studies textbook. Credit Abdullah Al Shehri

High school students in Saudi Arabia opened their social studies textbooks this week to find that the Force was with them.

In a lesson about the United Nations was a historic photograph of King Faisal. To his right stood Yoda, the Jedi master from the “Star Wars” films.

The other was adept with a light sabre, trained Luke Skywalker and lived for more than 800 years.

How they had ended up together in a textbook in a country with no public movie theatres was anyone’s guess. Even the Saudi artist who created the image had no idea.

“I am the one who designed it, but I am not the one who put it in the book,” said the artist, Abdullah Al Shehri, by phone from Riyadh.

The image was part of a series in which Mr. Shehri, who is 26 and goes by the nickname Shaweesh, mixes pop culture icons into historic photographs. He said he got the idea while looking through photo archives from the Middle East.

“All the pictures were very sad, you know, refugees and war,” he said.

Then he found a photo of Anwar Sadat, the Egyptian president assassinated in 1981, meeting Mickey Mouse during a trip to Disneyland.

“This is what the archive needs,” he recalls thinking. “Something fun, something that makes it less depressing.”

He later came across the photo that should have appeared in the textbook: a black-and-white image of King Faisal, who was a prince and serving as foreign minister at the time, signing the United Nations Charter in San Francisco in 1945.

And he thought of Yoda.

Like the king, he said, the Jedi master was known for his intelligence. He was popular among Saudis. And – sealing the deal – he was the same color as the Saudi flag.

“He was wise and was always strong in his speeches,” Mr. Shehri said of the king. “So I found that Yoda was the closest character to the king. And also Yoda and his light saber – it’s all green.”

Mr. Shehri had shown the work in galleries in Dubai, Houston and Aspen, Colo., he said, prompting conversations with people who did not know much about Saudi Arabia. Then on Wednesday, Mr. Shehri’s mother, a biology teacher, saw a copy of the book and texted him.

It remains unclear how his image had ended up in a high school social studies book.

On Thursday, Ahmed al-Eissa, the Saudi education minister, apologized on Twitter for the “unintended mistake.”

“The ministry has begun printing a corrected copy of the curriculum and withdrawing the previous copy and formed a legal committee to determine the source of the error and to take the proper measures,” he wrote.

As photos of the mishap went viral in Saudi Arabia, Mr. Shehri said he had gotten many positive responses from fans of King Faisal — and of Yoda.

“I meant no offense to the king at all,” he said.