Right when everyone thought that the era of American military engagement was over, US President Barack Obama announced his intent to strike Syria and punish the Bashar al-Assad regime for using chemical weapons against its political enemies. What the Syrian president is doing is indeed as criminal as the American use of napalm bombs and other deadly chemical weaponry in Vietnam, but with one difference — while no one threatened Washington with military retaliation, Damascus is under tremendous threat of being punished. 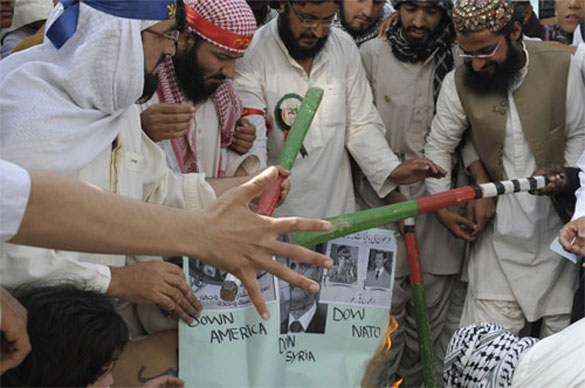 Down with everyone Pakistani demonstrators vent their anger against the Assad regime and the US during a protest in Quetta Photo: AFP

Obama seems determined to go ahead with his plans for an attack despite the international community’s outcry that the US has presented no concrete evidence to substantiate its claim that the Assad regime used chemical weapons. Although US Secretary of State John Kerry has claimed that traces of a nerve gas were found on relief aid workers in Syria, the world is nervous lest the US initiates a war and discovers later that there was no concrete evidence as had happened in the case of Iraq.

The tremors from an impending attack on Syria can be felt all over the world, especially countries that have the status of being American allies in the Muslim world. Most Islamic States (other than certain Arab countries) will experience the divide, especially between the civil society and the State regarding the proposed American strike against Syria. Indeed, the issue is being widely condemned by the educated parts of the civil society who feel that an attack on Syria will not bring any good.

In any case, Obama’s decision does not seem to be based on any moral principle but realpolitik, which many believe, is driven by certain interest groups and strong political lobbies inside Washington.

In Pakistan, the social media is abuzz with critiques of the American decision. In fact, what is peculiar at this juncture is the absence of any commentary from the pro-Saudi Arabia lobby, which is indeed very strong and vibrant in the country. It is no secret that the American effort to pressurise the Assad regime into capitulation is backed by Saudi Arabia and many of the Arab States of the Persian Gulf that are terrified by their perception of Iranian military power and threat.

It is also obvious to the world that Pakistan has a dependency relationship with Riyadh for reasons that vary from oil supply on concessional rates to Saudi Arabia’s patron-client relationship with the US. It is a popular belief that America often holds parleys with Islamabad through Riyadh. So, to many experts, it does not make sense when people close to the establishment, like former Pakistani ambassador Munir Akram, voice their misgivings about the impending attack. It is possible that the establishment is divided on the issue.

But Akram’s warning may also be part of a policy to balance a public image versus the actual decision on the matter. Like that of a number of developing countries, anti-Americanism has been a fundamental part of Pakistan’s politics. From the good old days of the former Soviet Union, when the left-of-centre component of the civil society would criticise the US for its imperialism, to the strengthening of the right wing that builds its popularity on anti-Americanism, successive governments have built their legitimacy on this particular factor.

Despite the fact that Pakistan is tied to the US since the early days of the country’s creation in a rent-seeking relationship, the linkage is akin to an affair rather than a marriage, a metaphor that people often use to describe their bilateral terms. And like in an affair, it is a matter to be hidden rather than advertised. Be it military or civilian stakeholders most would criticise the US despite being eager to engage with it. Thus, one wonders what it means when people say that the US is the most hated country in Pakistan. How does one describe a relationship in which the State benefits from getting people angry and excited about the US?

Hence, the problem is that while people are expressing their anxiety about Obama’s decision, there is very little criticism of Saudi Arabia, UAE and many of the Arab States that will directly benefit from such a misadventure.

While some people have brought up the issue, there is no thorough examination of the other contradictions of the American engagement in Syria such as the use of right-wing Taliban fighters in Syria or the willingness of most Sunni and Ahl-Hadith Jihadi groups to contest the Assad regime that they believe is backed by Iran. Reportedly, numerous dead bodies of Taliban mercenaries who had gone to fight in Syria were returned to Karachi and other cities.

Watching the various groups on social media, there is complete silence on the Syria issue. It must be remembered that groups such as Sipah-e-Sahaba Pakistan and Lashkar-e-Toiba (LeT)/Jamaat-ud- Dawa (JuD) go ballistic on issues such as Kashmir and Aafiya Siddiqui (a Pakistani neuroscientist who is serving a 86-year prison sentence in the US on charges of firing on an American soldier in Afghanistan) or are normally frothing at the mention of American and Israeli interests. These are the same people whose blood boils at the mention of Malala Yousufzai whom they believe to be a Zionist agent. So what explains this silence?

Pakistan-based Jihadi groups and the Tehreek-e-Taliban Pakistan are also known for their hatred of Iran and Shias. Anti-Shiaism, in fact, is part of their ideology. Thus it is not surprising to find Deobandi clerics like Maulana Tahir Ashrafi — celebrated by a lot of Pakistani liberals as a progressive cleric — being highly critical of Iran during television discussions or on other forums.

While the Deobandi Jihadi groups are more visible in their hatred of Shias expressed through their killing, the Ahl-Hadith jihadis such as the LeT/JuD are much more conniving and careful in their expression of hatred. The LeT/JuD are careful to the degree that most people cannot detect their rejection of the Shia ideological position. There are those who argue that the Ahl-Hadith jihadis operate by stealth through the Deobandi militants. But more important, these various groups are connected with Saudi Arabia and the Arab States of the Persian Gulf, which are also one of their major sources of funding. Their hatred for Iran surpasses that for the US, and so we find these militant groups and al Qaeda on the same page as the US on Syria.

However, the resultant contradictions and problems for Pakistan are more serious as it then becomes a question of keeping two policies — one for public consumption and the other to facilitate Washington. So, while Islamabad will condemn or not publicly support the US act of war, it does not seem inclined to stop jihadis from travelling to West Asia and their body bags then being flown back for burial. One wonders if the argument that the non-State actors are out of control will fly.

The claim that the State has no capacity to stop the jihadis is, in fact, a more dangerous proposition as it means an inability to demonstrate control, which is one of the key functions of the State. Such variations in policy then indicate the lack of a consolidated approach on the issue. This is despite the fact that Islamabad cannot afford to be party in this extra-regional politics as it has long suffered from the ‘cold war’ fought between Iran and Saudi Arabia on its territory.

Officially condemning an attack is one thing, but taking firm action against non-State actors, who seem to be running their own policy, is another. Such contradiction can further fuel the sectarian divide within the society, a development that the country can ill-afford.