Saudi Arabia Is Demonising Both Islam And the Palestinian Cause 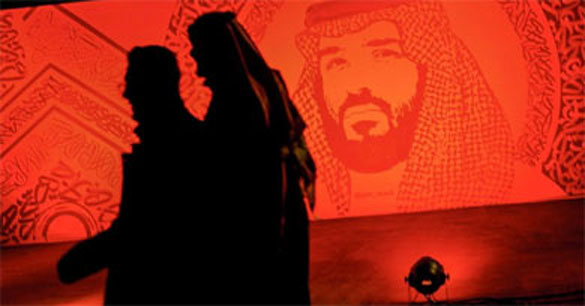 A recent report by the Saudi 24 news channel suggested that the Muslim Brotherhood was backing southern separatists in the Yemeni city of Aden - a vicious falsehood, as it is common knowledge that the separatists are supported by the UAE, a state hostile towards the Brotherhood.

In Palestine, Hamas is described as a terrorist organisation in Saudi media, accused of taking the people of Gaza hostage to fulfil its agenda.

These are just a couple of ways in which Saudi state media disseminates absurd propaganda, as the government embarks on a widespread campaign to refurbish its image and control the narrative about its policies, both domestically and abroad. The hypocritical campaign stems from a desire to mislead, control and distort reality, in an effort to protect Saudi interests.

There is no such thing as free speech in Saudi Arabia. The internet is heavily controlled and monitored, with strict censorship of books, newspapers, magazines, films, television and social media. The mass media serves as a propaganda mouthpiece for the establishment.

What makes things worse is the official stance that any type of criticism of the government is seen as a potentially destabilising and dangerous “sin”. The crackdown on Saudi independent voices is fierce, even if opinions are expressed vaguely and without any clear reference to Saudi authorities.

Dozens of prominent clerics and intellectuals have been arrested in what Human Rights Watch has called “a coordinated crackdown on dissent”.

Saudi Arabia is ranked 170th out of 180 countries in the 2020 World Press Freedom Index. In this climate of repression, professional media outlets are replaced by propaganda that serves the regime, promotes its worldview and demonises its rivals at the domestic, regional and international levels.

Only one narrative of events is promoted and circulated, but because Saudi policies these days tend to be unpredictable, loyalist propaganda can end up contradicting itself. Turkish President Recep Tayyip Erdogan was once touted as a reliable ally; now, he is a new Ottoman caliph, “terrorising” the region into submission.

The Assad regime in Syria was once portrayed as a monster that had to be toppled; now, we are told, it could be rehabilitated and even become an ally against Turkey. Such fluctuations have to be “justified” by government mouthpieces, whose ludicrous contradictions have been parodied on Twitter.

Social media platforms have not escaped the Saudi crackdown on freedom of information. The potential for social media to facilitate political communication in the kingdom has been devastated by persistent interference and surveillance by the government.

Twitter, in particular, is considered a threat to be tamed, policed, and used to control dissent. While Twitter periodically culls accounts tied to this disinformation network, the Saudi “troll army” is still going strong, manipulating “likes” and retweets to spread propaganda and give a false impression of the popularity of Saudi policies.

And yet, these actions do not serve the state’s interests. Instead, they obscure a key means by which to track and trace public opinion. In Saudi Arabia, there is virtually no “civil society”, no genuine structural representation of the public, and no outlet by which to influence the decision-making process.

Driving Saudi propaganda is the notion that the Muslim Brotherhood and so-called “political Islam” are the kingdom’s main strategic enemies. This is why Saudi Arabia backed the bloody 2013 coup in Egypt, which overthrew the country’s first democratically elected government. It is also why the state is hostile towards Qatar, which sided with the Egyptian democracy and the Arab Spring in general; and Turkey, which took a similar stance.

Saudi authorities appear to have become obsessed with Islam itself, with the state-owned al-Arabiya channel agitating against mosques and other Islamic institutions in the West, claiming that they are dangerous, linked to the Muslim Brotherhood, and funded by Qatar or Turkey. From Swiss museums to French high schools, organisations are discredited for being “connected to Qatar-backed Muslim communities”.

The whole Muslim presence in Europe is essentially painted by Al Arabiya as having “terrorist” affiliations. Islamophobia is thriving in the corridors of power in Saudi Arabia, even more than in the far-right movements of Berlin or Paris.

Saudi Arabia needs its propaganda network now more than ever, as it remains locked in a bitter struggle with Iran for regional dominance, turning to Israel for support under the notion of “your enemy’s enemy is your friend” (or perhaps the Saudi government merely capitalised on that threat to get cosy with Israel). But this move could end up backfiring on Saudi Arabia.

The dismal, short-sighted approach of the Saudi regime has led to another disastrous policy: turning against the Palestinian cause, in favour of US President Donald’s Trump’s “deal of the century”. Saudi Arabia has also embarked on a crackdown against scores of Palestinian Hamas supporters inside the country.

Saudi propaganda revolves around one central theme: inciting ultra-nationalist sentiments among the youth. Slogans such as “Saudi Arabia for Saudis”, “Great Saudi Arabia” and “Saudi Arabia First” have contributed to a new narrative, described by analyst Madawi al-Rasheed as “not simply a spontaneous grassroots movement but a state-led initiative under the auspices of the crown prince”.

The new sense of nationalism advocates a break not only from past religious conservatism, but also from any commitment to Arab and Muslim causes - particularly, the Palestinian issue, including the status of the holy city of Jerusalem.

Supported by the Saudi troll army, commentators and activists have pushed hashtags on Twitter aiming to delegitimise the Palestinian cause, with slogans such as “Palestine is not my cause”. Dehumanising Palestinians goes hand-in-hand with showing Israel in a favourable light - an impossible mission, but the Saudi regime continues to shoot itself in the foot.

Saudi Arabia’s war on the Arab Spring and the Muslim Brotherhood has destroyed its legitimacy, both politically and morally. The situation is sad and absurd.

Original Headline: Saudi propaganda is demonising Islam and the Palestinian cause