Indian Muslim Media’s Sympathy For The ISIS, Muslim Brotherhood And Taliban: Signs Of Fundamentalism Or Just Abundant Caution In The Face Of Quran And Hadees Being Cited By These Marauders?

If you study the news ‘angles’ of the reports in Urdu media in India on the current crisis in Iraq and the op-ed pages, you will realise that like the people in Iraq and the Muslims in general across the world, the Indian Urdu media is also very confused in their opinion of the Islamic State in Iraq and Syria (ISIS). When you read the reports in the international media you get a different picture of the fighters of the ISIS and their policy because the international media is equipped with resources, reach, committed and dedicated workforce and technology while the Urdu media relies more on their own interpretations on the news and reports received from international media. It results in a different picture altogether, often portraying a radically different image of the ISIS. 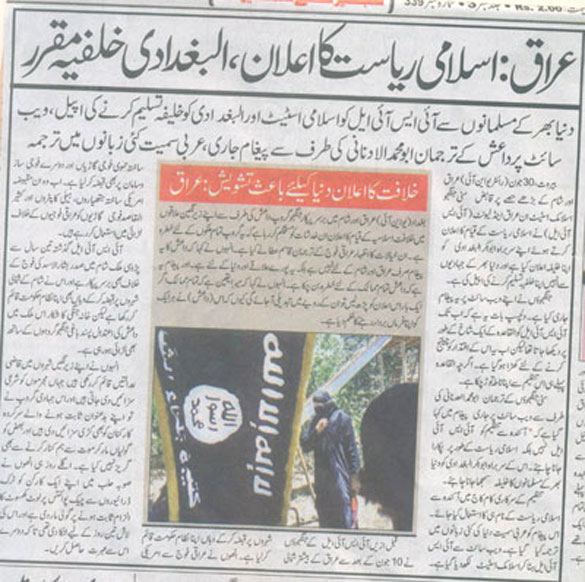 In India when we read articles by our learned columnists of Urdu newspapers, we form a very positive picture of the ISIS. The picture is: The ISIS is a religious organization, headed by a leader who is the namesake of the fist rightly guided caliph Abu Bakr and fighting to establish an Islamic caliphate. It is not killing people unnecessarily and not gunning down Shias and other opponents in cold blood, not sparing even women and children. They are not demolishing any religious places of the minority communities, be it Christians or Shias. They have so much respect for the Shariah Law and are acting so much within the Shariah law that they have even killed their own comrades for transgressing the Shariah.

Yesterday a Urdu daily published from New Delhi carried a news report on its cover page declaring that Abu Bakr Baghdadi had announced the most desired and much-awaited caliphate and wanted the world to call it by the name Islamic State and not by its name ISIS. The report also said that the ISIS have set up Shariah courts in their jurisdiction and justice was being delivered quickly under Shariah Law. The report also mentioned that they have not spared even their own men who were found involved in corruption and other wrongdoings.

In short, the entire report was meant to convey the message that Abu Bakr Baghdadi’s caliphate was not so bad as the international media and world community wanted Muslims to believe. The report did not mention the ethnic cleansing of the Shias, killing of other minority groups hostile to the Islamists and the destruction of the Shia sacred places and Mazars.

The editorial pages also entertain the so-called columnists and journalists who write articles painting a similar picture of the Islamists and any article that highlights the support of the Saudi Arabia to the terrorists, the killings of Shias and destruction of Shia shrines and Mazars. Any article highlighting the extremist face of Ikhwan ul Muslimeen is also not entertained while articles showing victimization of Ikhwan ul Muslimeen are published with sensational headlines.

This shows the sorry state of Muslim intelligentsia in India today. They ignore the extremist behaviour of Muslim religious or political organisations and only focus on their good side. This has aggravated the issue as Muslims reading the newspapers form a positive opinion of these organisations and outfits and support and admire them as the true upholders of Islam.

Thus Urdu journalists and columnist clearly want to create the impression that ISIS does not harm the Shias and their shrines or does not intend to cause harm to them. Having made their points, they wonder why do the Shias the world over worry over the advances of the ISIS and why the Shias are willing to take up arms to fights the ISIS when they attack Baghdad?  They have not been able to cite a single statement of the ISIS stating that they have nothing against the Shias and other minorities in Baghdad and so they should not panic. And yet they say that the ISIS is not sectarian.

There are hundreds of reports of the ISIS fighters killing Shias and destroying their shrines in their conquered territories. But such news does not figure in Urdu media on the pretext that it will create a rift between the two communities. In fact, the motive behind it is to cover up the wrongdoings of the Islamists. Publishing facts about the misdeeds of ISIS will negate the image Muslim Press wants to portray of the Islamists, that they are upholders of Islam and fighters for the noble cause of establishing a true Islamic caliphate.

This is not the case with the ISIS alone. The Urdu media has the same approach towards the Ikhwan ul Muslimeen (Muslim Brotherhood) too. Before their ‘victory’ in the elections and in the referendum for the Constitution, The Ikhwans of Egypt too had the same rigid and undemocratic attitude: that they want to establish a state based on Islamic Shariah and whoever opposes it even on political basis will be deemed enemies of Islam and summarily executed. They came to power and started killing and raping their opponents, an entirely un-Islamic practice. Some muftis affiliated to the Ikhwan also issued a fatwa legitimising the rape of Muslim women protesting against the government of then President Morsi. Peaceful protests are considered a democratic right all over the world but not in Islamist Ikhwan’s Egypt. Some religious muftis set up their own TV channels and issued fatwa against the opponents of Morsi. This created a state of confusion and chaos as anyone was saying anything not allowing the government to do its work. The chaos and uncertainty gave the army the lever to act according to their own convenience. Now, the Ikhwans are acting victims not realising that it was they who paved the way for their debacle. During the Ikhwan rule, some Muslim individuals and groups started abducting Christian girls and forcefully converting them to Islam.

But back home in India everything was fine. Ikhwan were portrayed as a true Islamic party infused with true Islamic spirit. As far as the Indian Urdu Press was concerned, they were not victimising their opponents, not killing Christians and other minorities; they were not declaring even their political opponents kafir.

Similarly, Taliban too was also discussed with abundant caution in Urdu media. In many ignorant circles, Taliban are only trying to establish a caliphate and not killing innocent people. They are only fighting the corrupt governments that are the stooges of the US. One does not find in the Indian Urdu Press articles openly criticising Taliban or detailing their black deeds. This is because of the same pro-fundamentalist approach.

This is because Taliban, Al Qaeda, ISIS or Muslim Brotherhood cite the Qur'anic verses and Hadiths for giving legitimacy or justification to their actions and policies. The Quran and Hadith is Achilles ‘Heel of the Muslims. The moment one quotes the verses of the Quran or a Hadith in favour of his argument, a gullible Muslim bows down his head in acquiescence.

These outfits have their literature on the internet explaining their actions and plans in the light of Quran and Hadiths making ordinary Muslims or imbecile youth believe that what they are doing is right and the killings they are doing are only for a larger mission and can be ignored. And the Urdu media happily goes along with that, asking no questions.