Islamist militant group Isis has said it is establishing a caliphate, or Islamic state, on the territories it controls in Iraq and Syria. 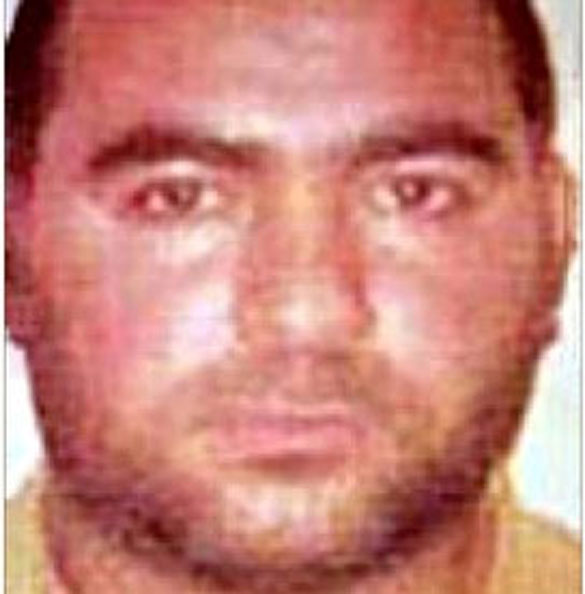 It also proclaimed the group's leader, Abu Bakr al-Baghdadi, as caliph and "leader for Muslims everywhere".

Setting up a caliphate ruled by the strict Islamic law has long been a goal of many jihadists.

Meanwhile, Iraq's army continued an offensive to retake the northern city of Tikrit from the Isis-led rebels.

The city was seized by the insurgents on 11 June as they swept across large parts of northern-western Iraq.

In a separate development, Israel called for the creation of an independent Kurdish state in response to the gain made by the Sunni rebels in Iraq.

Isis (the Islamic State in Iraq and the Levant) announced the establishment of the caliphate in an audio recording posted on the internet. 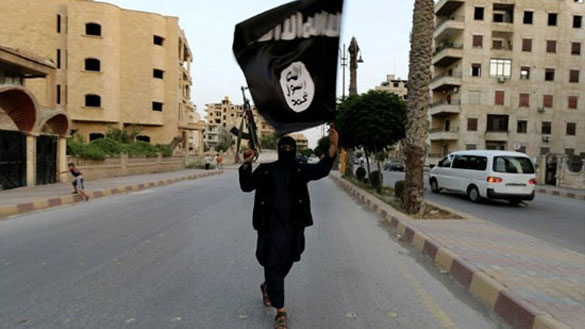 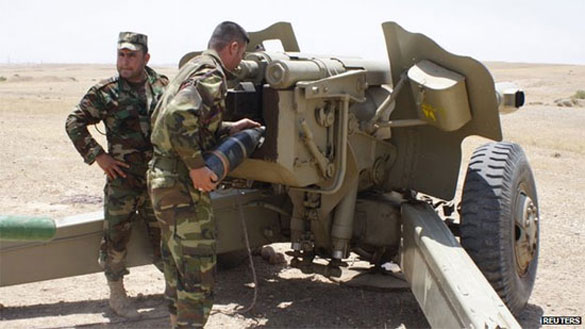 Kurdish artillery in clash with Isis, 29 Jun 14Kurdish troops clashed with Isis in Jalawla, in Iraq's northern province of Diyala

ISIS also said that from now on it would be known simply as "the Islamic State".

The BBC's Middle East editor, Jeremy Bowen, says the declaration harks back to the rise of Islam, when the Prophet Muhammad's followers conquered vast territories in the Middle Ages.

The Sunni-Shia split happened because of a dispute over the succession to Muhammad, with the Sunnis following caliphs as their religious authority.

The ISIS "Islamic State" challenges the borders established by Britain and France in the 20th Century when the Ottoman Empire collapsed, our correspondent says, adding that Isis militants see themselves as a band of revolutionaries not interested in popular legitimacy. 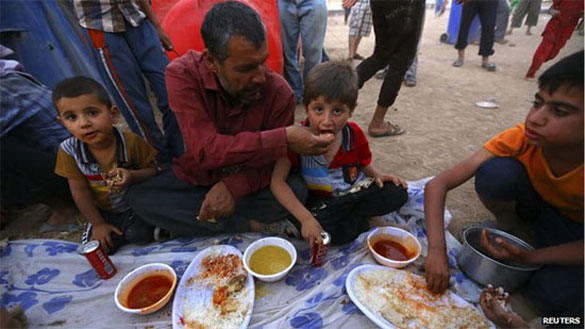 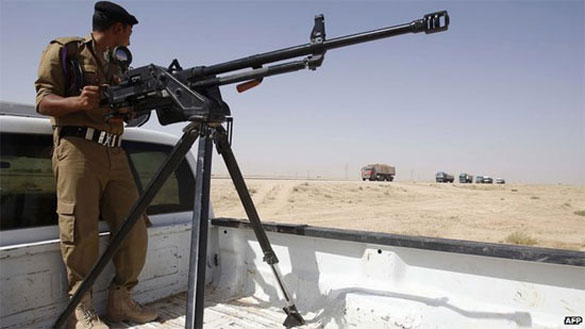 Isis said the Islamic state would extend from Aleppo in northern Syria to Diyala province in eastern Iraq.

Abu Bakr al-Baghdadi, the group said, would become the leader of the state and would be known as "Caliph Ibrahim".

In the recording, the rebels also demanded that all Muslims "pledge allegiance" to the new ruler and "reject democracy and other garbage from the West".

On Sunday, Iraqi government jets struck at rebel positions and clashes broke out in various parts of Tikrit, witnesses and officials said.

Troops had reportedly pulled back to the nearby town of Dijla as Saturday's initial offensive met stiff resistance.

The heavy fighting over the two days caused many casualties on both sides, eyewitnesses and journalists told the BBC.

Insurgents were reported to have shot down a helicopter and captured the pilot.

The witnesses said the Iraqi forces had been hampered in their bid to retake Tikrit by the large number of improvised explosive devices laid on the approaches to the city.

Iraq said on Sunday it had received the first batch of military jets ordered from Russia in order to help fight the militants.

Meanwhile, Israeli Prime Minister Benjamin Netanyahu called for the creation of an independent Kurdish state in response to gains made by Sunni insurgents in Iraq.

In a speech in Tel Aviv, he said the Kurds were "a nation of fighters and have proved political commitment and are worthy of independence".

Earlier this week, Iraqi Kurd leader Massoud Barzani told CNN that "the time is here for the Kurdistan people to determine their future".

Correspondents say the Kurds have long held aspirations for an independent state but they remain divided between Syria and Turkey, Iran and Iraq.

The international community, including neighbouring Turkey and the US, remain opposed to the breakup of Iraq. 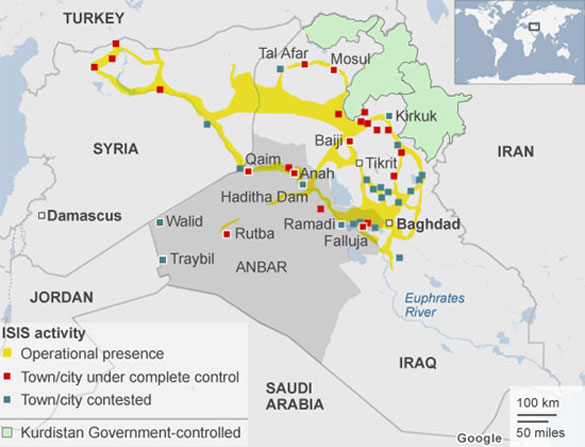 The declaration of a caliphate is a massive gamble that smacks of hubris and puts many Isis gains at risk, according to terrorism expert JM Berger. But writing he says:

If Isis is driven back, Baghdadi risks being seen as the man who grasped for the caliphate, held it in his hands for one brief shining moment, then lost it all.

Such a loss would highlight the hubris of ISIS in making this pronouncement and would also seem to validate the arguments of al-Qaida emir Ayman al Zawahiri that Isis's methodology was flawed and that the splinter group was putting the cart of an Islamic state ahead of the horse of fighting jihad.

The question now is how confident ISIS is about its ability to hold substantial territory in Iraq (reports suggest it is under heavy already, and the United States has yet to deploy any airpower against the insurgents). If ISIS made sure its partners are the ground would support the pronouncement and if it withheld the pronouncement until it was sure it had consolidated its gains, then it is in a position to reap benefits.

If Isis rushed its timeline or overruled objections from local partners, it may lose its territorial gains quickly and end up condemned for an arrogant and ill-advised power grab. The wording of its pronouncement certainly reeks of arrogance, demanding an oath of loyalty from essentially all Muslims, with dissenters being labelled sinners at best, or apostates at worst.

At best, and in the absence of any surprising new information (which could certainly be coming), ISIS appears to be standing on the edge of a precipice with an adolescent faith in its ability to keep its balance.

It may be able to walk that line, but it's a stunning and unnecessary risk by a group that could have navigated the next few months with excellent odds of an outcome that ranged from good to very good. Now it has introduced a much higher risk of an outcome that is truly bad for its long-term prospects.

Berger cautions that the gamble could pay off if the US plays into Isis hands by launching air strikes.

Such a strike would bestow on Isis the one thing it has until now been unable to definitively claim—legitimacy. A potential new line of jihadist argument then emerges: The caliphate was restored, but it was directly destroyed by the United States.

Isis clearly believes that a critical mass of Muslims sympathises with them, according to Yassin Musharbash an expert on radical Islam.

In a new blog post he says Isis is trying to garner more support by declaring a new caliphate.

Isis is very likely hoping that the declaration of the "Caliphate" may lead to tribes or villages or other groups of people outside of the Iraq/Syria-theatre declaring their allegiance to Abu Bakr [al-Baghdadi]. While Isis would know pretty well that this is not sustainable, it could still lead to a degree of chaos and strife in countries like Jordan or Lebanon or Saudi Arabia that may suit ISIS quite well. Remember: Since Zarqawi's days we know that the concept of destabilizing countries is part of the DNA of that group.

It is interesting to note that ISIS argues that any delay in the declaration of a "Caliphate" would be wrong. Saying we had to announce it rather than we wanted to announce it is clever and can become part of a narrative that has the power to convince more people.

You can't declare a Caliphate every other week. This is something that Abu Bakr can do once, and only once. This is why I think he must be pretty confident that even if everybody around him unites against him, he is still able to hold onto some areas.

Isis has produced a slick video, mostly in English, explaining the new caliphate in Iraq and Syria. It is entitled "End of Sykes Picot", a reference to the agreement between France and Britain on divvying up Iraq and Syria after the First World War.

"This is not the first border we will break, we will break other borders," its spokesman warns. Standing on a border sign he threatens to "break the borders" of Iraq, Jordan and Lebanon.

Later he pledges that Isis will free Palestine. "We are not here to replace an Arab cahoot with a Western cahoot. Rather our jihad is more lofty and higher. We are fighting to make the word of Allah the highest," the spokesman says.

He is filmed showing abandoned Iraqi army badges and vehicles left by fleeing soldiers. "There is no army in the world that can stand the soldiers of Islam," he said.

He also shows US-made Humvees and Fords captured from the border police. "Look how much American spends to fight Islam, and it ends up just being in our pockets," the spokesman taunts.

He boasts that Isis controls planes and helicopters, but these are not shown.

The video also features about a dozen men in a cell said to be captured troops and border police. At the end of a clip a building, said to be a police station, is shown being blown up.

How scared should the international community be of Isis given that it is surrounded by its enemies? Asks Atlantic commentator Robert Wright,

Talking on Blogging heads TV he pointed out taht governing a caliphate would be a "full time job" for the insurgents, and that the group broke away from al-Qaida in part because it wanted to focus on forming such a state rather than attacking the US.

Fellow pundint Peter Beinart agreed that the threat posed by Isis may have been exaggerated, but that its real danger was unknown.

Bloggingheads TV: 'Let's not freak out about ISIS'

Supporters of Isis, or Islamic State as they now call themselves, celebrated the announcement of a new caliphate in Iraq and Syria by firing shots into the air in the eastern Syrian city of Raqqa.

Welcome to our live coverage of the crisis in Iraq.

Here's a roundup of the latest developments:

The militant Sunni group Isis has said it is establishing a caliphate, or Islamic state, in the territories it controls in Iraq and Syria. It also proclaimed the group's leader, Abu Bakr al-Baghdadi, as caliph and "leader for Muslims everywhere".

Iraq's army sent tanks and armoured vehicles to try to dislodge insurgents from the northern city of Tikrit. The offensive is the first major attempt by the army to retake territory after the United States sent up to 300 advisers, mostly Special Forces, and drones to help the government take on Isis.

Residents in the frontline cities in the fight against Isis, such as Baquba and Samarra, say Shia militias are leading the fight against the militants and wielding inordinate power, according to Martin Chulov. In some cases, they say, security forces are deferring to them.

The Israeli Prime Minister, Binyamin Netanyahu, has voiced support for Kurdish statehood, taking a position that appears to clash with the US preference to keep sectarian war-torn Iraq united. Pointing to the mayhem in Iraq, Netanyahu called for the establishment of an independent Kurdistan as part of a broader alliance with moderate forces across the region, adding that Israel would have to maintain a long-term military presence in the West Bank even after any future peace agreement with the Palestinians.