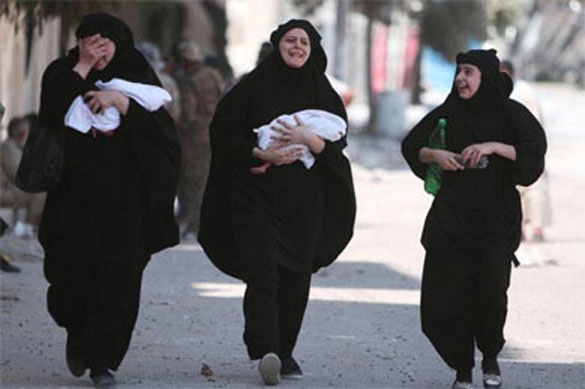 Kurdish gains along the Turkish border have been anathema to Mr. Erdogan's government. Women after being evacuated by the Syria Democratic Forces from IS-controlled Manbij in Aleppo, Syria. Photo credit: Reuters // The Hindu

Sharp changes in the war on Syria have impacted the policy of the Turkish government of President Recep Tayyip Erdogan. Initially Mr. Erdogan believed that the government of Syrian President Bashar al-Assad would fall precipitously. It did not. Rather than overthrow Mr. Assad, the war has placed Turkey itself in danger - a `failed coup' on July 15 came alongside a renewed war against Turkey's Kurdish population, just as Islamic State (IS) attacks in the country have raised alarm bells about Mr. Erdogan's adventurism. An adjustment of Turkey's policy is now on the cards. The President's August 9 trip to Moscow to meet Russian President Vladimir Putin and the warm words exchanged when the Iranian Foreign Minister came to Turkey on August 10 indicate a change.

In 2011, Turkey had hastily come out in favour of the removal of Mr. Assad. "It is not heroism to fight against your own people," Mr. Erdogan said in November 2011. This was a curious call from the head of government in a state that had been at war against its own people, namely the Kurds, since the 1980s. The call amplified the chorus in the Gulf Arab and Western capitals. Their main goal was to weaken Iran by overthrowing the Assad government.

Mr. Erdogan hoped that his fraternal Syrian Muslim Brotherhood would ride into Damascus on the wings of Western-driven regime change. But the West was wary. It provided diplomatic and military support to the rebels, but found the road to Damascus blocked by Russia, Iran and China. None of them wanted to see the scenario of Iraq or Libya replayed in Syria. Furthermore, Russia and Iran had material interests in Syria that they did not want to jeopardise. Now, five years later, Mr. Erdogan's forward policy has failed, which is why he has warmed up to both Russia and Iran in a bid to chart out a path from the Syrian quagmire.

Turkey's long border with Syria proved to be the most accessible route for arms and fighters. Gulf Arab and Western intelligence prowled the towns of the borders, working with Turkish intelligence to provide support for the motley crew of proxy armies. It was along this border that the Kurdish fighters, supported by the Kurdistan Workers' Party (PKK), a group banned in Turkey, began to make inroads. Last week, a coalition of the Kurds and Arabs under the flag of the Syria Democratic Forces seized the IS-held town of Manbij. Kurdish gains along the Turkish border have been anathema to Mr. Erdogan's government, which had restarted its war against the Kurdish population inside Turkey as well as against PKK camps in Iraq. It was this war that opened up tensions between Washington and Ankara, with the former uneasy with the Turkish assault on some of the main groups that had been fighting the IS.

It is not yet clear who authorised the `failed coup' against the civilian government in Turkey. Mr. Erdogan blames the movement of his former ally Fethullah Gülen. Since Mr. Gülen lives in the U.S. and because of rumours that the U.S. troops at the Turkish base in Incirlik had helped the coup plotters, animosity against the U.S. rose sharply. In late July, thousands surrounded the Incirlik base, burning U.S. flags and chanting `Death to the U.S.'. This was the day before the head of the U.S. Joint Chiefs of Staff General Joseph Dunford arrived in Turkey to soothe the heated relations. The firmest indicator that the U.S. opposed the coup, said Mr. Erdogan, would be the extradition of Mr. Gülen. Since this is not likely to take place, tensions between the U.S., North Atlantic Treaty Organisation and Turkey will remain.

Instability in Turkey as a result of the Syrian war has created great economic problems. The doors to the Western market are not wide open, while the war in Syria has blocked the West Asian marketplace. Renewed ties with Russia have restarted the Turkish Stream gas lines and prompted a Russian reaffirmation of its promise to build nuclear reactors in Turkey. The business lobbies close to Mr. Erdogan can breathe again.

Over the course of the past year, both Turkey's proxy armies in Syria and its Syrian political allies have seen their position weakened. Saudi Arabia's games with the Syrian opposition bloc have snuffed out the dominance of the Syrian Muslim Brotherhood. Meanwhile, under heavy Syrian and Russian bombardment, the extremist rebel fighters of Aleppo, including the Turkish proxies, have faced setbacks. It is clear that the extremists, including the Turkish proxies, will not be able to hold on for too long. Turkey seeks an exit before a full battlefield humiliation.

During his visit to Moscow, Mr. Erdogan suggested that Turkey needed to coordinate Syria policy with Russia and Iran. On August 20, his Prime Minister Binali Yildirim said that Mr. Assad could stay in power for a transitional period. The slogan `Assad must go' is no longer fundamental to Turkish foreign policy.

The day after Mr. Erdogan left Russia, a delegation of senior Turkish military officers arrived to coordinate a military command centre. Turkey is eager that the Kurdish forces not take territory along the border. Russian military officers told them that this would be a priority. A few days later the Iranian and Turkish Foreign Ministers announced close coordination on Syria. This is surely a blow to Turkey's proxies, and indeed to the Gulf Arabs who have come to rely upon Turkey as the pathway into Syria.

Iran's Foreign Minister Mohammad Javad Zarif told the press in Ankara that the "era of bullying and coups is over" and that "people's choice cannot be suppressed by a military group". The statement was about the `failed coup' in Turkey. It could just as well have been with reference to Syria, a country destroyed by regional ambitions. The rebalancing of Turkish foreign entanglements might finally allow Syria's future to be less grim.

Vijay Prashad, a columnist for the Turkish daily BirGün, is the author of fifteen books, most recently of The Death of the Nation and the Future of the Arab Revolution (LeftWord Books). He is a Professor of International Studies at Trinity College, Hartford, a journalist and commentator. In  2013 - 2014, Prof. Prashad was the Edward Said Chair at the  American University of Beirut, Beirut, Lebanon. He earned his B.A. in History at Pomona College, Claremont and both an M.A. and Ph.D. in History at the University of Chicago.