Was Mecca Summit a Peace Initiative Or One-Upmanship? 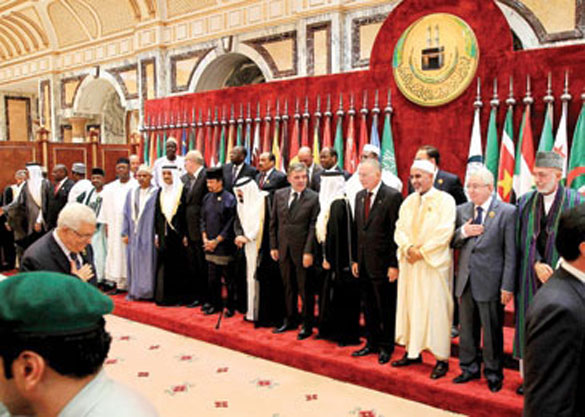 Did King Abdullah of Saudi Arabia host such a high powered Iranian delegation simply to hand them an insult in a gold salver: that the OIC seeks Syria's suspension? There are two other tepid resolutions supporting Rohingya Muslims of Myanmar and Palestinians.

Sheikhdoms, monarchies (with open western support) have worked themselves to a frenzy over Syria, but Saudi Arabia cannot allow itself the luxury of blind rage. It has a leadership position and its stakes in the West Asia game are much higher. Since the death of successive Crown Princes Sultan bin Abdel Aziz in October 2011 and Naef bin Abdel Aziz in June 2012, intimations of mortality are knocking at the doors of a series of prospective successors. King Abdullah himself was in hospital in Europe when the Arab Spring disturbed his convalescence. In February 2011 he returned and took charge.

He faces dissensions at home. There have been unconfirmed reports that Saudi spy chief Prince Bandar bin Sultan has been assassinated. In the absence of any official Saudi confirmation or denial, speculation and innuendo are rife.

Also, there is growing restiveness in the kingdom's oil bearing and predominantly Shia eastern province. Demonstrations have also been reported from Riyadh.

The western media has been predicting the fall of Bashar al Assad for the past year. An externally induced civil war is on the cards, but the collapse of the regime has not materialised. And for obvious reasons. Americans had to occupy Iraq for a decade before bringing about the messy change that is on show now. Syria is a mirror image of the Iraqi power structure prior to American occupation. Why would Syria then collapse by the exertions of well equipped mercenaries and proxies, however much of a space they may have made in some Sunni hearts?

None of this is to suggest that the Saudis are about to throw in the towel.

What is quite possible is that a point of divergence may have been reached between the West and the Arabs who have so far coordinated policy on Syria.

For some in the West, a possible result may already have been achieved in West Asia: quarrelling Muslim societies, too self absorbed to worry about Israel or Palestine. But a prolonged sectarian strife may not be entirely to Saudi Arabia's liking. It has its own oil rich Eastern province to worry about. Dammam, the centre of this province, is directly linked by a 37 km causeway to the troubled kingdom of Bahrain with its 80% Shia population in revolt against the Sunni king. Bahrain is home to the United States Fifth Fleet and a holiday resort for the Saudis tired of their own institutionalised austerities.

Any evaluation of Shia politics in the region would be flawed until it takes into account the considerable influence that the holy city of Najaf exerts on Baghdad, Tehran, the Hezbollah and the majority of Bahrainis.

For several years the whispered demand in Najaf has been to end the "repression" of Bahrain's Shias.

Last year, a road map towards a shared future was hammered out between US envoy Jeffrey Feltman, Crown Prince Hamad bin Khalifa and a young Shia leader much admired in Najaf, Sheikh Ali Salman. This threatened the power of Prime Minister Khalifa Ibn Salman al Khalifa, who happens to be the king's brother. By this time the Prime Minister's friend and hardline Saudi Crown Prince Naef was in control in Riyadh. He ordered armoured personnel carriers to rumble down the causeway linking Dammam to Bahrain, inaugurating a phase of endless demonstrations and brutal police repression.

That is why there has to be more to the presence of a high powered delegation from Iran (everybody except the Supreme leader himself) than the statements that have been put out in the public domain.

Is the Feltman plan or something like it being revived in Bahrain? And is something similar being planned for Syria? Remember, the hardline Prince Naef is not around and King Abdullah, emotionally drained, has always been known to be pragmatic. The proposed centre in Riyadh for dialogue between Muslim sects is a conciliatory step. As is Bahrain's decision to reinstate its ambassador to Tehran.

Saeed Naqvi is a Distinguished Fellow at the Observer Research Foundation and a senior journalist.