Why Can’t Mosques Be Relocated Or Deconsecrated And Sold In Certain Situations As Churches Are?

While Christians have found it possible to deconsecrate, decommission or repurpose their vacant, unused churches, despite a continuing debate on the issue, Muslims have been traditionally very rigid on keeping a mosque a mosque no matter what.

Hundreds of mosques in our part of Punjab, for instance, are lying unused or taken over by local people for decades since most Muslims of the area left for Pakistan after Partition in 1947. Some mosques have been maintained by local Sikh populations; one was recently rebuilt by local Sikhs, even though there are few Muslims there. They did so as a goodwill gesture to local Muslims and also to remind themselves of the times when Guru Nanak had prayed there. However, hundreds of mosques are lying vacant or plundered and occupied by locals for different purposes. But Muslims do not find it possible to sell those plots and use the money for other community purposes.

Another issue is: can a mosque be relocated for widening of road or for other reasons. The issue came up in news headlines when the Vishwa Hindu Parishad offered to relocate the Babri masjid, brick by brick, in a different place in Ayodhya. Of course, Muslims refused and the mosque was eventually demolished in 1992.

Why do Muslims take such an irrational attitude towards mosques to the detriment of the community? One argument is that once we start praying in a mosque the proprietorship of that land is transferred to God and only He can sell it or decide to relocate it. This amounts to saying that the land did not belong to God earlier. But who can argue with classical theologians who passed away hundreds of years ago, destroying all vestiges of rational thinking from Muslim scholars. Yes, there were rationalist thinkers among Muslim scholars. Briefly, during early 9th century CE they even got support of the Caliphs, but all their writings were destroyed and we now learn about their ideas only from the literature created to criticise them. By the way, this is exactly what happened in India to rationalist and materialist Charvaka or Brhaspatya philosophy.  We learn about Charvaka’s ideas only from hostile refutations of his ideas, just as we learn about rationalist Muslim Mu‘tazilites from their criticism by established traditional theologians. 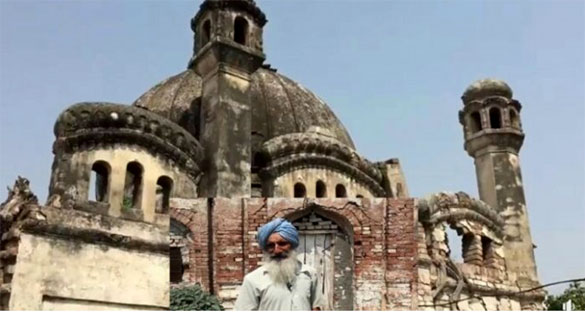 The 100 years old mosque in village Hedon Bet, Machhiwara Tehsil in Ludhiana still stands tall, despite zero Muslim population in the village. The Mosque that was built in 1920 lies abandoned for want of worshipers. Thanks to village elders the mosque has not been demolished or being encroached upon by the land grabbers. The elders of the village refuse to let anyone demolish it as they believe it’s a house of God.   Image Courtesy: Muslim Mirror

Why are Muslims so adamant not to rethink their positions on the issue of decommissioning mosques as Christians deconsecrate churches and sell them when required by circumstances? To understand this, we have to study the theology of consensus behind this issue. Let me quote from the highest juristic authorities in Islam:

In their writings, Islamic juristic authorities like Ibn Hajar Asqalani, Ibn Qudamah, Imam Nawawi, and Zafar Ahmad Uthmani have all stated the following:

“It is ruled that if a person dedicates his land to a mosque, it will pass from his property to Allah Almighty's. Once established, a mosque cannot be bought, sold, or given as a gift. It is likewise forbidden to inherit a mosque……. The Quran, Hadith, consensus (ijma’), and analogy (Qiyas) are all used to establish Waqf. From the time of the Holy Prophet (peace be upon him) till now, the Ummah has followed this norm. The creatures have no legal right to use a mosque for anything other than worship. As a result, if the property is set aside for a mosque and a mosque is constructed on it, it will remain a mosque until the Day of Resurrection.”

The Encyclopaedia of Islamic Jurisprudence, (popularly known as Kuwaiti Fiqh Encyclopaedia, as it was assembled in Kuwait by a group of scholars from several schools of thought in an endeavour spanning half a century and running into 45 volumes, completed in 2018), says:

“According to the majority of jurists, it is not permissible to relocate any mosque…..The jurists of the Shafi’i school of thought state that If a mosque collapses and it is impossible to rebuild it, it will not be sold under any circumstances, as it is currently possible to offer prayers in it……..The vast majority of jurists believe that selling a mosque is forbidden. According to the Hanafis, if a person converts his land into a mosque and meets all of the requirements for his Waqf to be valid, he cannot take it back, sell it, or inherit it...According to Maliki jurists, it is not permissible to sell a mosque under any circumstances, whether it is vacant or not. It is against the law to sell or demolish a mosque. It is also illegal to sell the ruins of a mosque…..Tafsir Qurtubi says that it is not permissible to demolish a mosque, sell it or suspend it even if the neighbourhood is deserted…..” (Encyclopaedia of Islamic Jurisprudence, vol.37, p.262-266)

“It is absolutely forbidden (haram) to relocate a mosque and construct a road or a house on its property, even if a golden mosque is constructed in its place.” (Imam Ahmad Raza Barelvi, Fatawa Razviyya, vol.6, p.385)

“The mosque is only the name of the land which is devoted to prayers. Even if a person turns his vacant land into a mosque, it will become a mosque. Respect for the mosque will be obligatory for him”. (Cited in Fatawa Razviyya, vol.6, p.390)

“The mosque will always be a mosque, and its Masjidiyat will never vanish. The martyrdom of a masjid does not invalidate its Masjidiyat.” (Fatawa Mufti-e-Azam-e-Hind, vol.3, p.177)

“The land that became a mosque will now remain a mosque forever.  It would be a tremendous injustice to it if it were to be martyred and abandoned. Allah Almighty says in the Quran:

“Who does more wrong than those who prevent Allah’s Name from being mentioned in His places of worship (Masajid), and [than those who] strive to destroy them? Such people have no right to enter these places except for fear. For them is disgrace in this world, and they will suffer a tremendous punishment in the Hereafter.” (2:114)”

A recent fatwa quoted below, however, gives hope that some Muftis have probably started rethinking these issues.

Is it permissible to move a mosque to a different location?

Questioner: Assalam Alaikum, Mufti Sahib! We purchased a residential area in order to construct a mosque. We temporarily began offering Adhan and prayers five times a day in the same building. However, we have not yet begun Friday prayers. Our administration has decided to sell this mosque and construct a new mosque somewhere. Is this permissible to do so?

You can sell this building if you desire to relocate the mosque to a larger and better location.

The Imam of Hanafi jurisprudence, Hazrat Ibn Abidin Shami (may Allah have mercy on him) says:

“The door of a mosque can be changed by the [Muslim] residents of the area. The Fatawa volumes 'Fatawa Khaaniyya' and 'Jamiul Fatawa' both suggest that the inhabitants of the area can move the mosque from one location to another, even if they leave it in a position where no prayers are offered. They can also sell the old mosque, whose founder is unknown, and use the earnings to build a new mosque.” (Ibn Abidin Shami, Raddul Muhtar, 4/357, Beirut, printed by Darul Fikr)

This shows the principle that, in the event of a need, the administration may relocate the mosque.

Imam Zainuddin Ibn Nujaim (may Allah have mercy on him) said:

“If the pool or mosque becomes desolate and people scatter, the judge (court) has the authority to spend the Awqaaf (endowments such as land, estates, gardens, shops, apartments, and money) on another mosque. If one of the two mosques becomes desolate in any location, the Qazi (court) has the authority to use its wood (and other resources) in the construction of another mosque.”

In this regard, Imam Ibn 'Abidin and other jurists have elaborated:

“According to Imam Abu Yusuf (may Allah have compassion on him), if the mosque and its surrounds became deserted and people migrated here and there, it would not return to the property of the one who originally dedicated it. As a result, the remains will be sold with the judge's permission, with the revenues going toward the construction of a new mosque.”

The majority of jurists have not only agreed with Allama Halwani's opinion but also quoted it:

When Shams-ul-Aimma Al-Halwani was asked: Is it permissible for the qaazi or judge to spend the mosque's endowments on a new mosque if the existing mosque or pool becomes unused and the region's population disperses and no longer need it? He replied affirmatively.

When [unused] mosques and pools are not relocated, their debris is seized by thieves and occupying gangs, as we have witnessed in our times. The organisers, for example, illegally occupy such endowments (land, estates, gardens, stores, and money). As a result of the failure to relocate the endowments, the other mosque, which requires such endowments, is also left desolate.

According to the above-mentioned arguments, any alteration in the structure of the mosque that does not conflict with the purposes of the mosque is acceptable. Such challenges are being addressed in light of current demands and circumstances, with the ultimate goal of providing the finest opportunity for the propagation of Islam.

I can only hope that this trend towards rationalism continues and Muslim ulema of today help evolve a theology in all its aspects that is more suited to the times we live in and takes into account the new circumstances that keep emerging all the time.