Mankind Is Fortunate That Blasphemy Exists Only In Islam, Not In All Faiths 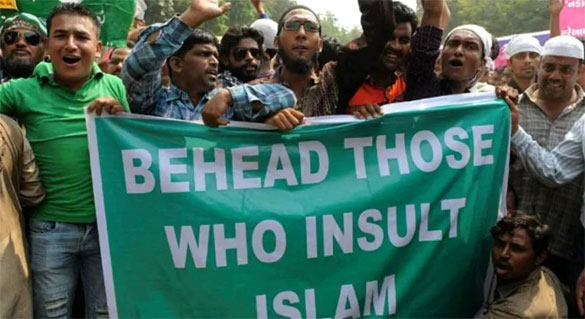 The way Islamic countries and Muslims across the globe are reacting to Nupur Sharma's comment on Muhammad, one's reminded of Kai Nielsen's words, “In a way, mankind is lucky that blasphemy is limited only to Islam and this madness doesn't exist in other religions and religious cults. Had it existed in other religions as well, we'd still have been shedding blood over the perceived insults to our respective religious figures." So very true.

Now when the terrorists of Al-Qaeda are threatening to blow themselves up to prove their blind and slavish loyalty to Rasool, world is again asking the same question: Is Islam indeed a religion of peace or piece? Well, before I discuss this, I'd like to dwell upon the idea of blasphemy or sacrilege (Kufr) in Islam.

By the way, I wrote a piece in TOI: Why Blasphemy Is Alien To Hinduism . Mind you, I'm NOT a Hindu. The newspaper categorically mentioned that the writer is an atheist who always writes God in lower case.

Most of the Muslims have a cult-bonding with Islam and a cult always demands strict adherence from its followers which often degenerates into Totalitarianism. And there's no gainsaying the fact that Islam or for that matter, any cult is a totalitarian unit, predominantly, a tribal, desert/arid unit of early believers believing in dictates and blindly following a (dictatorial) leader. This belief is always unquestionable (From, ' Sociology of religion-New World Encyclopaedia ').

Like fundamentalist Judaism and medieval Christianity, Islam is totalist. That's to say, it makes a total claim on the individual. Indeed there's no individual; there's only the Ummah- the community of believers. Islam follows you everywhere, into the kitchen, into the bedroom, into the bathroom, and beyond death and eternity. Islam means -'submission'- The surrender of independence of mind. The surrender now bears the weight of well over 60 generations and 14 centuries.

Also Read:  Blasphemy Outrages; The Frenzy Goes On Unchecked: Will The Ulema Take Responsibility For The Murders Of Innocents?

While followers of all other man-made faiths have matured and somewhat evolved with the passage of time, most of the Muslims still live and think on a mofussil plane with desert moorings of cult-worship. They don't want to change themselves because their cultish association with Allah, Muhammad, Quran and Hadees is too strong. The sense of being sacrosanct is ingrained in almost all Muslims.

Agreed, Jewish and Christians also wreaked havoc and burnt heretics at the stake, they don't do such reprehensible things any longer, because a modicum of maturity dawned on them as centuries glided by. But sense and sagacity still elude most of the Muslims.

Also Read:  How Not to Talk About Blasphemy

Hindus in the past mercilessly burnt Charvaka and his followers alive and tortured Jains and Buddhists at the behest of their religious heads but that was more hierarchical (read Brahmanical) and caste-based (indeed, condemnable) and less religious in nature.

Somewhere down the line, all faiths grudgingly accepted the religious crimes perpetrated in the past by their followers and asked for forgiveness at some point in time, however insincere that may be, to get along with the rest of mankind. But that willingness, even grudging or at face value, is not to be found among a majority of Muslims.

Today, if you condemn Jesus and brand Mary's Immaculate Conception as a mere mare's nest, no Christian will decollate you. Even if you say that the PUTATIVE Jesus was never crucified at Calvary (Islam doesn't believe in the Crucifixion of Christ and aptly calls it Cruci-fiction!), a Christian will curse you and sulk but will not physically harm you.

Likewise, if you say before a Jew (or even a Christian) that Moses receiving The Ten Commandments (Decalogue) from god at Mount Sinai is a humbug or Moses was high on psychedelic drugs (https://www.iol.co.za/news/world/moses-was-high-on-drugs-researcher-391832), no Jew or Christian will hang you. But say anything unpleasant and even mildly unnerving about Muhammad, your crossover is assured, nay guaranteed. This is rank puerile behaviour which clearly shows the total absence of Aql-e-Saleem (prudence) among the followers of Islam.

Hope, it evolves enough to be called a religion of 'peace' and sanity in the days, sorry, centuries to come.

A frequent contributor for New Age Islam, Sumit Paul is a researcher in comparative religions, with special reference to Islam. He has contributed articles to world's premier publications in several languages including Persian.