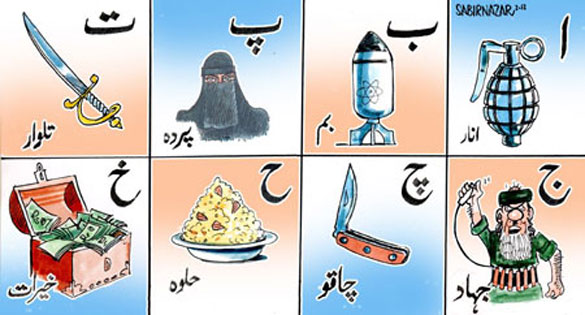 In our society, however, the school curriculum propagates a narrow-minded worldview, spreads hatred toward minorities, and indoctrinates a militant ideology. With an overall religious overtone, this curriculum tends to develop a pseudo sense of superiority in Muslim children.

This invisible strategy of producing a highly prejudiced generation is implemented through three tactics of distortion, omission and degradation. Thanks to these tactics, by the time these children grow up they develop a clear perception of who the “inferior others” are in all social contexts.

Through distortion most school text books in Pakistan offer an inaccurate historical view of the subcontinent to children where history starts and ends with Muslims as a dominant cultural, military and economic force in the region. Through the practice of omission and exclusion, positive contributions of minorities in the society are widely ignored and excluded from text books. Finally, school books portray religious minorities as an insignificant section of the society degrading them as second class citizens.

A recent study of textbook contents in Pakistani schools “Fanatic Literacy or Education” conducted by the National Commission on Justice and Peace (2012)says that minority religions are viewed with “contempt and prejudice” in the school curriculum and even the textbooks on sciences and linguistics have about 20 percent of information on Islam and related issues.

The study also deplores that minority students are forced to learn Islamic studies as a mandatory subject on the pretext that either qualified teachers are not available to teach minority religions or they are expensive to hire if available. In an environment where intolerance rules the day, thousands of Christian and Hindu students have no choice but to study Islam for their own safety.

Another study “Connecting the Dots: Education and Religious Discrimination in Pakistan (2011)” conducted by the International Center for Religion and Diplomacy (ICRD) in partnership with the Sustainable Development Policy Institute (SDPI) analyzed textbooks and interviewed students and teachers in public schools and Madrassas in Pakistan on their views on minority religions.

The overall conclusion of the study indicates that religious minorities are portrayed either in derogatory terms or they are excluded from textbooks. Social studies and Pakistan studies textbooks generally tend to treat India and Great Britain negatively but “Hindus are often singled out as particularly inferior or evil,” the study reveals.

The textbooks for 4, 5, 6, 8 and 10 grades also widely degrade Hindus, distort the history of the subcontinent or ignore them altogether. The following comment, for example, in a Social Studies textbook for grade 6 bluntly distorts historical facts:

“Before the Arab conquest, the people were fed up with the teachings of Buddhists and Hindus.”

Although these textbooks have limited references to Christians, whatever information they have on them is highly negative and demeaning. In historical contexts, for example it is mentioned that despite good treatment “Christians never appreciated nor liked Muslims’ rule on Jerusalem.”

Surprisingly, the study also reveals that the textbooks being used in Madrassas were originally written in Arabic centuries ago. The books on philosophy and logic were written in thirteen and fourteen centuries. Books on health and medicine, written in the eleventh century, are still considered relevant and books on religion were written between eleventh and seventeenth centuries. No wonder why the generation educated in religious schools still lives in the past, unaware of the realities of the 21st century.

This dangerous indoctrination of our children not only echoes how their teachers view minority religions, but it transforms students into chauvinist monsters. Some of the following comments made by teachers and students as part of the study are amazing:

•Although most students thought minority religions should be respected, they criticized these religions

Realizing that school textbooks are poisoning our youth with the contents full of hatred towards minority religions, education reforms of 2006 attempted to change the school curriculum. However, as it looks, roots of fundamentalism are still strong in our school textbooks.