Kitty Inspiration for a Happier World: What Little Olinj Taught Me on Teacher’s Day

Little Olinj was quite a naughty girl last week, and that’s why Dolly Aunty gave her to me yesterday to mind. In two days she had eaten four of Stephen Anna’s pigeons. But cats will be cats, and they’ll do as most cats would if they are set among the pigeons. And so, even though I was a little cross when I heard about what she had done, when I saw Dolly Aunty carrying Olinj in her arms and heading towards my room, I forgot all about her bad behaviour. She looked so naughtily sweet! 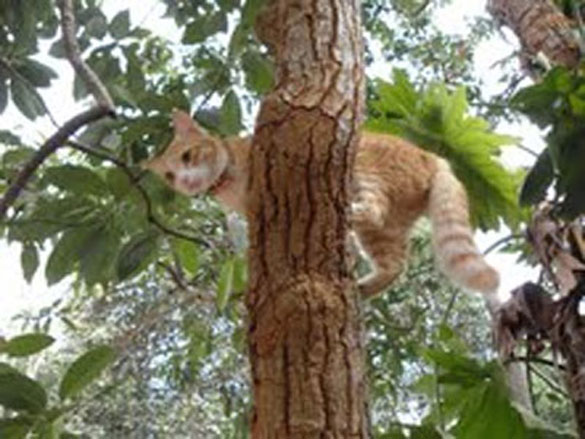 I’ve never been much of a cat lover, I have to admit. I’ve been much more of a dog person, really. Dogs are more ‘substantial’—they are bigger, as a rule, and so you can give them a tight, hearty hug, which isn’t something I suppose you could administer to a cat. And then, dogs, I think, are infinitely more emotionally expressive, jolly and interesting people. Cats, on the other hand, can be distressingly private, sullen, cranky, grim, standoffish—boring even. While a dog will easily make you the centre of his life, a cat just couldn’t care less if you were dead or alive. That, at any rate, is the impression I’ve had all along, although, I have to confess, I’d never bothered to verify its veracity.

And so when Dolly Aunty brought Olinj to my room yesterday and asked me to keep her, you can imagine that I was more than just a little apprehensive. I hadn’t the slightest idea about how I would entertain her. On the one hand, I was, admittedly and despite my deeply-rooted anti-cat prejudices, quite excited. I was going to get a new room-mate! But, on the other hand, I really had no clue as to how Olinj and I were going to get along.

Dolly Aunty wanted Olinj to get used to hanging around my room so that she would stay away from Stephen Anna’s pigeon-pen. She dropped Olinj inside my room, left a bowl full of goodies for her to eat, and went away.

Olinj didn’t even say hello, although I tried being nice to her. Very typically cat, I thought to myself. She went on an inspection tour of the room, walking very staidly. She sniffed about in the corners, and then, when she had had enough, she hopped onto my bed. Resting her little head on my pillow, she curled herself into a ball and promptly fell off to sleep!

I looked at her closely. Her head was all crooked, and she had half covered her face with her little furry paws. Suddenly, she seemed so very innocent, like a harmless, helpless baby!

When Olinj awoke, she stretched her paws and gave out a little yawn. Then, she looked up at me—with a pair of sparkling, emerald-green eyes. She definitely wasn’t smiling, but she seemed pleased with herself, and with the world in general. She closed her eyes gently as I moved closer, as if to indicate that I had received her approval. Then—and this was most unexpected—she lifted her head and began to rub her soft little nose on my cheek! After a while, she jumped up on her fours and demanded to be played with!

Olinj definitely wasn’t cold and stern, as I thought all cats were! In fact, I now had to hurriedly conclude, she was really quite a sweetie! And, who knows, maybe all cats were, too! There and then, I decided to adopt Olinj as my daughter.

It was ‘Teacher’s Day’ yesterday, and do you know what? Maybe Olinj came into my life on this particular day in order to teach me a lesson that I desperately needed to learn. And I have to say she did remarkably well at her job.

As I indicated earlier, I’ve been deeply prejudiced against cats—and that’s putting it politely—for as long as I can remember. I’ve thought almost every imaginable bad thing about them. Now, there’s always an element of truth in a stereotype, or else it wouldn’t stick. And so, probably not everything I thought about cats is wrong. But what I learned from Olinj yesterday was how stereotypes tell only one wee lit bit of a much larger and very complex story, and that too in a heavily skewed way.

Little, loveable Olinj reminded me of the enormous hazards of making blanket generalizations, and of how easily tempted we are to think bad about others, rather than good. Not all cats, she taught me, were rude and boring. In fact, none of them probably were. It was only because I hadn’t made the effort to understand them that I had thought what I had about them. I wanted to see cats as wholly awful, and that’s why they appeared so to me. I had been too closely wedded to my anti-cat prejudices to want to see anything that didn’t confirm and conform to the picture that I had constructed and carefully cherished. Really, if anyone was rude and ill-mannered, it was I, and certainly not the entire cat family, as I was once convinced!

And there was something else that Olinj taught me—that our conflicts with others are often rooted in our refusal to accept them just as they are. I had detested cats simply because I couldn’t accept them for what and how they were. This only further reinforced my anti-cat views, leading me to refuse to recognize that cats could have anything even remotely nice about them. Had I accepted cats as they were, and desisted from unfairly comparing them with dogs, I would definitely have discovered many beautiful things about them. And then I would have been spared all that negative energy that my anti-cat prejudices had generated.

Stereotypes, half-baked knowledge and our refusal to accept others as they are (rather than as we want them to be in order to suit our convenience) make a really dangerous combination. That’s something that little Olinj taught me yesterday, very aptly on Teacher’s Day. Her lesson isn’t just about the unfairness of negative stereotyping of cats, the dangers of ill-informed views about them and the perils of refusing to accept them just as they are. It actually extends, if you really think about it, to every conceivable sort of human relationship. Conflicts between individuals often have to do with the untested and half-baked views and preconceived beliefs that they have about each other and which they don’t bother to verify. They also have to do with a refusal to accept others just as they are, warts and all. This holds true at a more macro level, too. Even at the global level these are what often underlie bloody conflicts between cultures, religions, communities, and even entire countries, resulting in loss of enormous loss of precious lives.

As little Olinj taught me yesterday when she looked up at me with her soulful green eyes and rubbed her nose on my cheek, if only (our egos permitting!) we’d allow ourselves to see people (and cats) as they truly are, instead of viewing them from the prism of our prejudices, the world would be an infinitely happier place!