Paths Are Many; The Rishi’s Call It By Many Names

One of the most common quotes I hear from Hindu’s is that we are all one, all the religions teach the same thing, and there is no difference between Hinduism and other religions. Ironically, we do not hear this view from Christians, Muslims or other groups. The Christian and Muslim are not likely to embrace Krishna when he said, “All paths, Arjuna, lead to Me.” (Bhagavad Gita 4.11) Likewise, the Christian view that Jesus is the only path is not embraced by Hinduism, nor does the Muslim believe that Allah or Mohammad is Krishna. Though this view has been embraced frequently by the “New-age” movement in the United States, and has spread globally with the new-age movement. 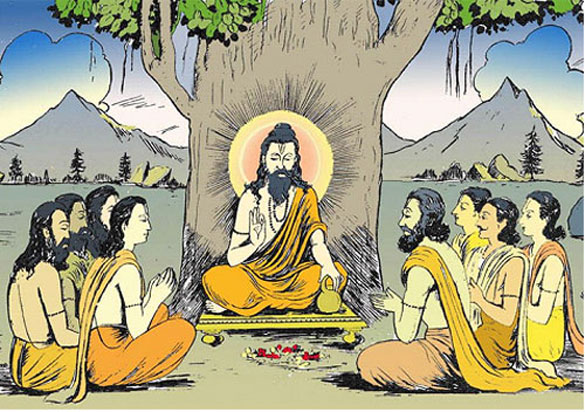 There is now a term to describe what Hindu’s are doing. Hindus are frequent to embrace what Sri Dharma Pravartaka coined as “radical universalism”, or the belief that all religions and teachings are essentially the same. This same view is also apparent within the teachings of Vedacharya Vamadeva Shastri (David Frawley). In modern sociology this is commonly referred to as “Eclecticism”, referring to piecing together a belief system based on fragments of different religions.

While practitioners of the new-age movement really have no basis to support this view aside from opinion, the Hindu will likely look to the Vedas to support such a statement; and the most commonly quoted verse from the Vedas is from the Rig Veda 1.164.46:

This verse is commonly misquoted as:

“Truth is one, paths are many.”

“Truth is one; the Rishi’s know it by many names.”

This translation ignores several important words and the entire rest of the verse.

The entire verse roughly translates as:

The seers called one by many names as they speak of Agni, Yama and Matarishvan.

There is considerable difference between the two verses. The problem is that only a small portion of the Shloka is quoted, namely—the seers called one by many names-- Ekam Sad Viprãh Bahudhã Vadanti. But, as stated earlier, the remainder of the mantra is completely ignored. The context of the Suktam is ignored as well. Upon examination, one will see that the mantra is not intended as justification that all religions are the same, but rather is talking about Vaidika, Bharata Varsha, Sanatana Dharma or what later become known as Hinduism.

Examining the entire Suktam, one quickly discovers that the first 42 stanzas are devoted to the Vishvadevas commonly translated as all-gods, but in reality is a special grouping of deities together within a rik. Other deities mentioned in this Suktam are Vak, Surya, Kala which is a hidden reference to Kali, and Saraswati; as well as Mitra, Varuna and others. It becomes clear that the subject is not regarding the similarity of religions, but rather that the Supreme Vedic deity is known by many names. This supreme deity is identified within the Upanishads as Brahman, as Brahman is the “one” that the rik is referring to. In other words, all the Vedic deities are one with Brahman.

This is not to say that world religions do not share some common ground, as certainly there are universal values such as love, compassion and other important qualities, but the fact that the world’s religions share a handful of similarities does not mean they are teaching the same thing, or that they have the same goals.

Separation of the World’s Religions

Reincarnation is a key and important distinction between Hinduism and many of the world’s major religions. Hinduism has always embraced the concept of reincarnation. Often critics argue that reincarnation does not appear within the Vedas; but the term ‘Samsara’ appears frequently within the Upanishads., with the earliest references associated the Brihadaranyaka. Likewise, we see in the Rig Veda:

“May your spirit return again, to perform pure acts for exercising strength, and to live long to see the sun.” Rig Veda 10.4.57.4

Clearly this is a reference to reincarnation, though the word reincarnation does not literally appear, rather the spirit or intention of the mantra is such.

Several of the world’s religions teach salvation, as opposed to Hinduism’s liberation. Karma is another important distinction between Hinduism and many of the world’s other religions. Occasionally there are attempts to say that karma is like the Christian “Golden Rule”, which is the ‘treat others as you would like to be treated.’ But in reality karma is a divine law that recognizes the need for realization, learning and resolution of conflict within the field of the mind. Hinduism embraces Atma-Janna or knowledge of the self. Hinduism has the most extensive teachings on meditation and the art of meditation and mantra.

What Does The Rest Of The Suktam Say?

While it is accepted, at times, to quote only one rik from the Vedas for a point or teaching, as we have seen, this is not the case in 1.164.46 where only a portion of a line is used to make a point. This is generally not accepted within the Vedic lineages or teachings. It is also important to consider the deities associated with the Suktam as well as the subject matter of the entire Suktam for clarity on a Shloka.

The entire Suktam (1.164) continues onward to discuss the astral body and even the solar calendar referring to the “twelve-spooked wheel” which is a reference to the solar year. There are references to seven horses which are “yoked” to the one wheeled car; this is a reference to 7 known planets in the Vedic astrological system which are connected or “yoked” with the Sun which is the one wheeled car. It was understood by the Vedic Rishi’s that many of the Gods could be called “Sun Gods” as they are born of Aditya, which is a reference to the Vedic zodiac. These Riks connect the Vedic deities with the Vedic zodiac and their relationship with Aditya. But there is more to this Suktam than just astrological information.

The appearance of seven is significant within this Suktam, as it does reference the chakra system. The seven Vedic Rishi’s are commonly referred to as the Saptarishis and are equated with the stars of the big dipper. Additionally the Saptarishis are associated with the seven chakras. When examining the chakra connection, these Rishi’s are given a dualistic quality except for the seventh which has transcended duality (the crown chakra located at the top of the head). This teaching is found within this Suktam, as verse 15 states that “…the seventh is single born, but the six are twins…” indicating the masculine and feminine qualities of each chakra.

But this Suktam has much more to teach. The Vedic worlds are identified, as the Suktam says “the heavens are my parent…the navel is my relative…the spacious earth is my mother. There are deep mystical teachings in this Suktam and it is very long, but of all the various subjects and secret teachings contained within it—radical universalism or the idea that all religions are basically one is not one of them.

Ancient View of Other Religions

While it is most likely that Hinduism or Sanatana Dharma has influenced the world’s religions to a greater degree than is currently accepted by scholarly circles, what was the ancient view towards other religions? The Vedas does shed some light on these issues, but it addresses these issues within Sanatana Dharma to the greatest degree; recognizing two groups of people: Dharmic and Adharmic, those that are for and practice dharma and those that are against dharma (Adharma). This is also addressed in the Vedas as battles between the Devas and the Asuras, and is also illustrated in conflicts between the Angirasa’s and the Bhrigus. And finally as battles between the Vedic people’s that embraced dharma and those that had allowed dharma to slip to lower levels such as with the Panis and Dashyus during the Vedic age. So the Vedic traditional view would examine other religions to see if they were truly practicing dharma and not automatically agree that they are all basically saying the same thing. The Vedic teachings would say to stand against Adharma if you are a follower of dharma.