Kejriwal: A Hindu by Faith A Muslim by Practice

When Arvind Kejriwal was delivering his inaugural speech as Chief Minister of Delhi I was sitting in another room and listening to him. All of a sudden I heard him saying ‘Main Allah Ka Shukriya Ada Karta Hun’, I got confused and went to the room where the TV set was on. O my God, it was Kejriwal who uttered this sentence of gratefulness. I did not hear such words of praise of Almighty even from the mouth of a Muslim politician in India. 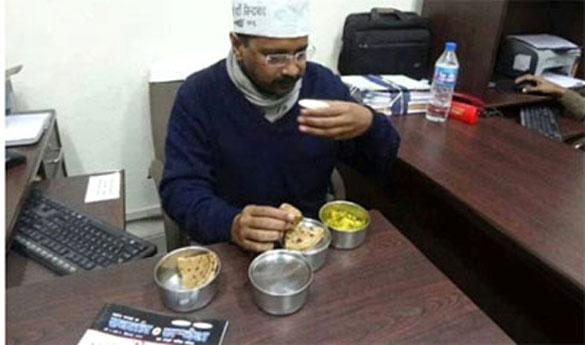 When I see Kejriwal’s sacrifice and his struggle for the cause of common man, when I see his austerity, his simple life style, his honesty and his straightforwardness I wish he were Muslim. Whatever he calling for or doing is absolutely the teaching of Islam.

Prophet Muhammad said that ‘Your worst enemy is your ego’.

Kejriwal in his inaugural speech as the CM asked his supporters to shun all kind of ego otherwise a new movement may start to end our ego.

Prophet Muhammad said ‘Cleanliness is the part of Imaan. When Kejriwal was income tax commissioner he used to clean his table, when he became politician he took the broom and started cleaning the system.

Prophet Muhammad said ‘Simplicity is the part of Imaan.’ Look at the simplicity of Kejriwal. He is the simplest person by any standard.

Once Prophet Muhammad was sitting on his foot, one of his companions asked ‘why are you sitting like this? The prophet said ‘I am a servant of Almighty Allah and I sit like a servant’. Kejriwal always says ‘Meri Koee Auqaat Nhi’  ‘Meri Koee Haisiyat Nahi’ I am nothing, I have no status.

Muslims believe that the time of death is fixed, and no power of this world can put off it for a moment. By refusing his security Kejriwal has proved that he also believes in the fixed time of death. He told media persons that if God wants to kill him, no one can save him. And if does not want, no one can kill him.

Islam is the greatest advocate of brotherhood, and it declares all mankind the sons and daughters of Adam and Eve. Kejriwal gave the massage of brotherhood by singing the song…Insaan Se Insaan Ka Ho Bhaee Chara Yahi Paigham Hamara’

Kejriwal is one of the few Hindu politicians in my knowledge who don’t follow the unethical policy of Chanakya who advocated to ignore all kinds of ethics to grab the power at any cost.

The way Kejriwal and his ministers are roaming freely and contacting people in a move to redress their grievances and solve their problem reminds us the Caliphs of Islamic history when Muslim Caliphs used to roam into the streets to know the problems of the masses.

Kejriwal needs to apply the following model to end the corruption from the society if he really wants to do so.

During one of his frequent disguised journeys to survey the condition of his people, Caliph Umar overheard a milkmaid refusing to obey her mother’s orders to sell adulterated milk. The mother reportedly told her daughter to add water to the milk as Caliph Umar is not there looking at them. The girl shot back that though Caliph Umar is not looking at them, Allah is always watching over everyone. Next morning Omar sent an officer to purchase milk from the girl and learned that she had kept her resolve; the milk was unadulterated. Umar summoned the girl and her mother to his court and told them what he had heard. Then he offered to marry the girl to his son Asim as a reward. She accepted, and from this union was born a girl named Layla that would in due course become the mother of Umar ibn Abd al-Aziz  (682 A.D.) who is known as Omar II in the Islamic history .

Caliph Omar II was the mightiest ruler of his time on the planet whose authority was spread in three continents – but Umar died in Ra jab 101 AH at the age of 38 in a rented house at the place called Dair Sim’aan near Homs in Syria . He was buried in Dair Sim’aan on a piece of land he had purchased from a Christian. He reportedly left behind only 17 dinars with a will that out of this amount the rent of the house in which he died and the price of the land in which he was buried would be paid.

Once his wife found him weeping after prayers. She asked what had happened. He replied: “I have been made the ruler over the Muslims and I was thinking of the poor who are starving, and the sick who are destitute, and the naked who are in distress, and the oppressed that are stricken, and the stranger that is in prison, and the venerable elder, and him that had a large family and small means, and the like of them in countries of the earth and the distant provinces, and I felt that my Lord would ask me about them on the Day of Resurrection, and I feared that no defense would avail me (at that time), and I wept.”

The Facebook page of Kejriwal describes him as Gandhis’ Talisman. If  Kejriwal really wants to solve the problems of the masses then he must follow the advice of   Gandhi .Just after the independence in his speech delivered in Kolkata  Mahatma Gandhi said ” that if India finds a man like Omar ibn Khattab all the problems will be solved”.

Gandhi was the greatest supporter of Caliphate Movement and was much influenced by the second Caliph Omar.