Saviour of the Dead: The Edhi of India, Mohammad Shareef, Deserves a Plug

By Swaminathan Natarajan and Khadeeja Arif 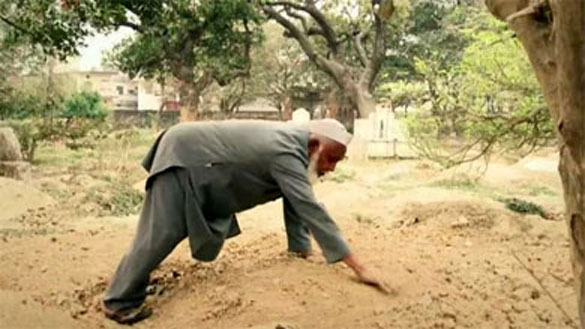 Mohammad Shareef never got to bury his son. Instead, he has spent the last 27 years burying the unclaimed sons and daughters of thousands of other families.

It took a month for police to tell Mr Shareef that his son had died, and even then, they couldn't tell him where, or how.

All Mr Shareef knows is that his son, Mohammad Rais, was one of almost 2,000 people killed in the Hindu-Muslim riots which engulfed India following the destruction of a mosque on a disputed religious site in 1992.

Mr Shareef doesn't even know where the 25-year-old was buried.

"Police told me his body had decomposed," Mr Shareef recalled, almost three decades on. "We didn't see his body. We only got his clothes."

But a few months later, he would witness something which would change his life forever.

"One day I saw police officers throwing a body into a river. I was horrified," Mr Shareef says.

Along with the horror, came a realisation.

"I think my son's body might have been thrown into a river, just like other such dead bodies. That day I said to myself, from today I am the guardian of abandoned dead bodies and I will give them a proper funeral." 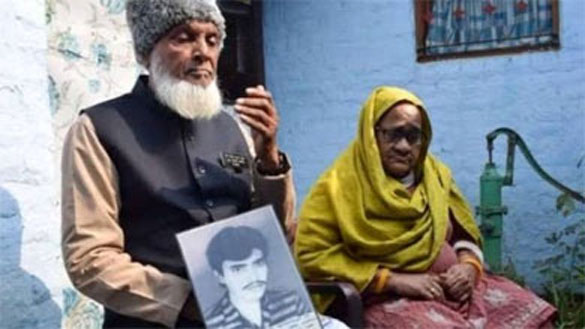 Unclaimed bodies pile up in India for a host of reasons: they could be people who lost their lives in road and rail accidents, or people who died far from home - pilgrims, migrants, old people abandoned by their children.

Some impoverished patients die in hospital with no-one to take care of the funeral.

But what to do with the bodies? Back in 1992, many districts in India didn't have a mortuary facility. It was fairly common practice to dispose of unclaimed bodies quickly.

Burial was the preferred method, but in some places in north India they dumped unclaimed human remains into rivers to save money, time and effort.

Mr Shareef's family have long suspected that Rais' body ended up in the Gomti River. It flows past Sultanpur, the city where the young man had been working as a chemist in December 1992 - the month when Hindu fundamentalists tore down the 16th Century Babri mosque in Ayodhya, Mr Shareef's home, 65km (40 miles) away.

Rais went missing amid the bloodshed which followed.

"After my son disappeared I searched for him everywhere for a month, like a mad man," his father says. "I didn't find him anywhere. I even went to Sultanpur to look for him."

Then came the news they had been dreading: their beloved son was dead. Mr Sharif and his wife Bibi were traumatised. His wife still struggles with periods of depression to this day.

The pain is aggravated by the fact they were not able to give their son a proper burial. It is a pain no one else should go through, Mr Shareef says.

"I decided that in my district, I wouldn't let any unidentified body be thrown away into a river," he says.

In India's caste-bound Hindu society, those who were at the bottom were historically forced to do the job of burial and cremations - and then treated as "untouchables" as a result.

But Mr Shareef - a bicycle mechanic by trade - was not to be deterred. He told the police about his desire to take up a task shunned by everyone else.

"When I got the first call, my heart was pounding. After the post-mortem, the police asked me to take away the body. I clearly remember that person's neck was slashed."

Soon, his workload started to increase. He even bought a four-wheeled cart to transport the dead.

Predictably his family members, friends and neighbours were taken aback. Even as a Muslim, Mr Sharif began to experience the same social exclusion as his Hindu colleagues.

"No-one in my family was happy at that time. They said, 'you have gone mad'.

"Some people were afraid of me. They thought they would get infected with germs if they made physical contact with me."

Yet Mr Shareef was resolute in his conviction. He had skipped family weddings, festivals and even prayers for the sake of unknown people. It gave him peace and solace: performing last rights is a moment to remember his son.

"It helped me to deal with the pain of my son's death. I think about him all the time. I miss him."

It is not an easy job. Police often struggle to identify the body, which means they may have been dead for some time. Often it is not the bodies, Mr Shareef says, but the smell which is most off-putting.

"Whenever I see a badly mutilated or decomposed body it is difficult to sleep. I have nightmares and resort to sleeping tablets," he explains.

"Sometimes police officials come with me to the cemetery but even they stand far away."

All the same, he always takes the time to ensure the person is given the proper treatment, usually bathing the body.

If he realises the dead person is Muslim, he wraps the body in a sheet of cloth and recites the final prayers. If the body belongs to a Hindu, he takes it to be cremated.

No-one know exactly how many bodies Mr Shareef has buried. The head of Ayodhya district administration, Anuj Kumar Jha, told the BBC that they don't have full records of the bodies handed over to Mr Shareef.

"Our rough estimate is we would have given about 2,500 bodies to him," he said. Mr Shareef's family say he has given last rites to more than 5,500 people.

Yet for years, he toiled without any financial support. To this day, he works in his bicycle shop, earning the equivalent of about $3 a day.

But things are changing. He has been recognised for his dedication. The government has given him one of India's highest civilian awards, while local shop owners now also help cover his expenses. At the age of 80, he is now able to have two paid assistants who are sharing his burden.

"Both Hindus and Muslims help me. People give me food and warm blankets. Recently I had to have an eye operation - a stranger called me and gave me 20,000 rupees [$290]."

But retirement is not something he is willing to consider. Neither his two surviving sons nor grandchildren want to follow in his footsteps, nor he is acutely aware of what will happen if he stops doing this work.

"If I am not there, police will throw the bodies into rivers as they did before."

For a man who some call the "saviour of the dead" that would be unbearable.

"I will continue doing this till my last breath," he says.