In These Two Expressions Lies Peace in This World and the Next..........Hafiz Shirazi

“In these two expressions lies peace in this world and the next/ With friends, Magnanimity; with enemies Tolerance." 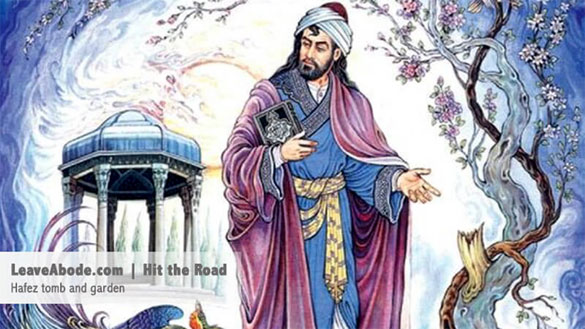 Khwāje Shams-od-Dīn Moḥammad Ḥāfeẓ-e Shīrāzī, known by his pen name Hafez and as "Hafiz", was a Persian lyric poet. A tentative portrait of Hafez Shirazi.

Whenever I read Deewan-e-Hafiz in my mother tongue Persian, this couplet makes me cogitate very deeply. Hafiz used the pre-medieval Persian word Imafat (beginning with the deep-sounding Ain letter of Arabic just like Irfaan which also begins with Ain) for magnanimity (Vadanyta or Audarya in Sanskrit). Imafat is the epitome of Faraakh-Dili or Sakhavat. Only through unconditional and all-encompassing acceptance (Magnanimity), can we embrace our friends and with Tolerance, we can win over our enemies.

Humans need to exercise Magnanimous Tolerance at this hour. But the way, the world is behaving on a variety of issues, it seems almost all humans have failed to internalize the import of Magnanimity and Tolerance. That grace of heart and mind to forgive, forget and move on has become a rarity in these violent times.

Sheikh Saadi beautifully put it: React not when someone says something unpleasant about your faith and its revered figures; when a dog bites a man, does he also bite the dog back? To react is to show your intolerance and the narrowness of your mind. When you fail to show magnanimity and tolerance, you show the pettiness of your character. When you hurl the choicest abuses and imprecations at someone, don't you ever think that if the words you spoke appeared on your skin, would you still be beautiful? Magnanimity and Tolerance also suggest that you're a humble soul.

Once Maulana Rumi was challenged by a highly learned but cantankerous Jew to debate with him as to which religion, Judaism or Islam, is better. Maulana Rumi calmly said, "When the essence of all faiths is the same, what's the need of a debate regarding the superiority and inferiority of any faith? And that essence is humanity which flows in all humans whether a monotheist, polytheist or even an atheist. Iqbal said it so beautifully, "Haqeeqat Ek Hai Har Shai Ki Khaaki Ho Ya Noori/Lahoo Khursheed Ka Tapke Agar Zarre Ka Dil Cheerein " (The Truth of every creation is the same/The blood of sun oozes when you cut an earthly particle's heart open). Lack of Magnanimity and Tolerance gives birth to vindictiveness. It makes humans revengeful.

This revengeful spirit is what we've been observing in today's world. Whether it's religion, politics, social or general affairs, we're ever-ready to go for the jugular. Urdu poet Rauf Laylapuri aptly said, 'Quwwat-e-Bardasht Ab Insaan Mein Kahaan? /Ghussa Aaya Toh Arsh Pe Ja Pahuncha ' (Where's the capacity for toleration? When anger emerges, it shoots up to the Seventh heaven). In this age of religious pettiness, Magnanimity and Tolerance are the biggest casualties. The blinkers of religion and politics have closed our eyes from seeing the truth.

We've lost Mansur Al-Hallaj's Minhaaz (Forgiving magnanimity, the original Arabic word also means 'Path'/Righteous path, to be precise) when the people, who were peeling Mansur's skin for his alleged blasphemy, suddenly felt a gush of repentance and a sense of discomfort and shock, seeing the raw flesh of Mansur and asked for his forgiveness. "When was I angry with you to forgive you now? Hack me to pieces without the slightest sense of compunction,” feebly said the great Persian mystic. This is the apogee of Forgiving Magnanimity and absolutely unadulterated Tolerance. Even an ounce of it can save mankind. But, are we ready even to have a drop of it?

Alas, we're much more obsessed with the drops, nay a deluge, of blood and gore. Lastly, in modern usage, the word “Tolerance” has come to signify mutual respect and peaceful harmony between conflicting religions and ideologies.