The Opportunity Hidden in The Corona-Induced Solitude

An image doing the rounds on social media shows Planet Earth enveloped by darkness all around, with a caption saying “CLOSED FOR REPAIRS”. So true. An invisible and hitherto-unknown virus has achieved the unthinkable. The corona crisis has suddenly decelerated the pace of life for almost the planetary population. With the world having come to a screeching halt, people around the globe are in enforced confinement at their homes. 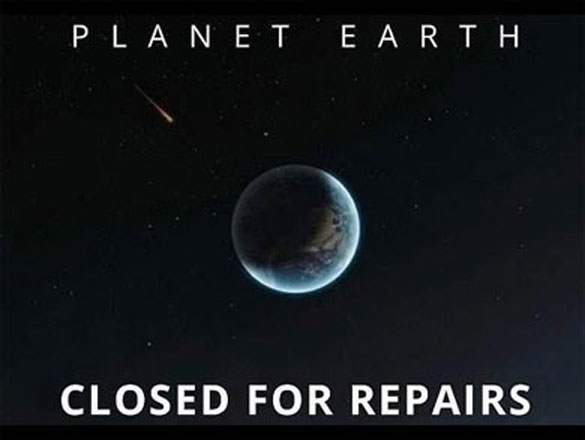 The future is fraught with uncertainty. The socio-economic costs of the prolonged lockdown of countries, cities and communities would be frighteningly high. Yet, the crisis also has its benefits. “But where danger is, grows the saving power also,” writes the German poet, Friedrich Hölderlin. At least some of that saving power comes from people beginning to philosophise about their new condition, prodded by the sudden and unexpected disruption in their routine life. We are asking questions we had hitherto avoided, had not even thought about, or were too afraid to confront. So long as we were accustomed to living a fast-paced life, — worrying about traffic jams, timelines, deadlines, targets, and so on — we had little time or reason to pause and face questions about ourselves, the meaning of our existence, the purpose of our pursuits, and the mysterious forces in nature and the vast universe that influence our settled lives. In the wake of the COVID-19 pandemic, millions of people across the globe are wrestling with the question: “Why did our world come to this pass? Is it because we took too many things for granted?”

Clearly, this slowness in the flow of life, and the resultant solitude, is a powerful stimulant to one’s thinking cells. “All thinking, strictly speaking, is done in solitude and is a dialogue between me and myself,” wrote Hannah Arendt, one of the most influential political philosophers of the 20th century. “But this dialogue of the two-in-one does not lose contact with the world of my fellow-men because they’re represented in the self with whom I lead the dialogue of thought.” Her words resonate what another philosopher, Socrates, famously said nearly 24 centuries ago — “The unexamined life is not worth living.” We should thank the corona crisis for giving us an opportunity to examine our own lives, and the human condition in general. A useful way of self-examination is by scrutinising our own — and also our society’s — strongly held dogmas.

One such dogma is that speed is superior to slowness. We want everything to move speedily in our lives. We want our planes, trains and cars to move faster. We want our nation’s GDP to grow faster, unmindful of whether the benefits of rapid growth are socially equitable and environmentally sustainable. We are filled with anxiety if our incomes and comforts do not increase faster. Industries want their products to become obsolete faster. Who wants to watch a Test match when a T-20 offers fireworks in every single over? And instant sexual gratification having become a substitute for romance, there is little preference now for the gradual and often painful blossoming of love that demands patience, commitment, hope and honesty. In the age of information, image and experiential overload, we crave all the time for something ‘new’. We feel bored, even frightened, when something unexpected forces us to remain alone and silent even for brief periods of time. In short, we are conditioned to think that what’s slow is not worth having.

But is that really so? Is slow really a synonym for stagnation and regression, and is fast always a guarantor of progress?

My own examination of this question was spurred by the bold and unconventional thoughts of Mahatma Gandhi. He was nothing if not unconventional in much of what he said, wrote or did. He was never afraid of swimming against the tide of times, even at the cost of being misunderstood. He was critical of the modern man’s craze for fast and unnecessary mobility, which he believed made man pay less attention to his inner self. “Speed is not the end of life. Man sees more and lives more truly by walking to his duty”, he wrote in Harijan of 30 September 1939.

Earlier, in his seminal work Hind Swaraj, which he penned in 1909 in his days of solitude during his voyage from England to South Africa, he offered a trenchant critique of modern materialistic civilisation, which he likened to a “mouse” “gnawing” our people while apparently soothing them. Hind Swaraj was widely criticised for being anti-modernity. In his defence, he later wrote, “[My book] is not an attempt to go back to the so-called ignorant, dark ages. But it is an attempt to see beauty in voluntary simplicity, poverty and slowness. I have pictured that as my ideal. I shall never reach it myself and hence cannot expect the nation to do so. But the modern rage for variety, for flying through the air, for multiplicity of wants, etc., have no fascination for me. They deaden the inner being in us. The giddy heights which man’s ingenuity is attempting, take us away from our Maker who is nearer to us than the nails are to the flesh which they cover.”

The art of living, Gandhi insisted, cannot be practiced without experiencing the beneficial effects of silence. “The mind is a restless bird; the more it gets the more it wants, and still remains unsatisfied.” Regular prayers, fasting, keeping a weekly day of silence on Mondays (when he would communicate to others only through writing) and daily work on the charkha were his ways of “calming” his mind and listening to “more subtle things” from one’s inner being — such as the “music of the spinning wheel”, which he described as the “music of universal love”.

The Choice Before Individuals and Societies — To Have To, To Be?

Very few of us can emulate the Mahatma’s ideal of “voluntary” simplicity and poverty, but there is abundant evidence to show that having a lot more of material comforts than we need does not add to our happiness. Indeed, it reduces our inner contentment since wants and desires by their very nature are insatiable — and, like the corona virus, highly contagious. “If others can have it, why not I?”

In his last important book To Have or To Be (1976), renowned American psychoanalyst Erich Fromm (who is best known for his classic The Art of Loving) demonstrated how a lot of man’s – also society’s – problems stem from the domination of the “having” mindset over the “being” mindset. The inevitable consequences of a life driven by the “having” instinct are unhealthy competition, excessive consumption, hoarding, inequity, fear, violence and wars. In contrast, the culture of “being” urges us to be loving, caring, sharing, desirous of justice and peace, and in harmony with ourselves and nature. Fromm observes, “The need for speed and newness, which can only be satisfied by consumerism, reflects restlessness, the inner flight from oneself; …looking for the next thing to do or the newest gadget to use is only a means of protecting oneself from being close to oneself or to another person.”

The corona crisis has forced many thought leaders around the world — from Abhijit Banerjee to Yuval Noah Harari — to echo what Fromm wrote over four decades ago. “If human beings are ever to become free and to cease feeding industry by pathological consumption, a radical change in the economic system is necessary: we must put an end to the present situation where a healthy economy is possible only at the price of unhealthy human beings. The task is to construct a healthy economy for healthy people.”

The Opportunity Hidden In The Corona Crisis

If there is one issue that is currently at the centre of corona-induced contemplation and concern of almost every human being on earth, it is HEALTH. “How healthy am I? How can I make myself safer?” These are no doubt important concerns. But people misunderstand health mostly as bodily wellbeing. There is far too little awareness about the mental, moral and spiritual dimensions of health, which were endangered even before the corona crisis arrived. Now, in the solitude gifted by the lockdown, many of us are realising that the fast-paced and noise-filled life that we recently left behind, and which we will again be pushed into, has impaired many health-promoting powers of our senses and our soul. To be healthy is to be able to achieve body-mind-heart-soul equilibrium.

I am currently reading Wounded Healer of the Soul, an illustrated biography of Carl Gustav Jung by Claire Dunne. Jung was one of the two most important psychoanalysts of the last century (Sigmund Freud being the other). Like Gandhi, he bemoaned the constant assaults of speed, noise and lack of nearness to nature on human beings’ psychic health. “Solitude,” he wrote, “is for me is a fount of healing which makes my life worth living. Talking is often a torment for me, and I need my days of silence to recover from the futility of words.”

Four years before his death in 1961 at age 86, Jung wrote in a letter that silence and solitude were his prime needs. Noise he fled “whenever and wherever possible” because it not only disturbed the concentration needed for his work but also “forces me to make the additional psychic effort of shutting it out.” Noise caused by “technological gadgetry,” gramophone, radio, and “now the blight of television,” he described as something that was “predominantly extroverted and abhors all inwardness. It is an evil with deep roots” because “it drowns the inner instinctive warning” and “all goes together with the spiritual disorientation of our time.”

The worldwide spread of corona virus is reminding us on an hourly basis that the human race is suffering not only from a health crisis and an economic crisis of unprecedented magnitude, but also from a psychic and spiritual disorientation. This disorientation is manifesting itself, at the individual level, as religious and racial hatred, xenophobia, atrocities on women, and indifference to the plight of the poor and the marginalised. At a broader global level, it is apparent in the form of a ceaseless race among powerful nations to dominate others with ever more lethal weapons of mass destruction, and suicidal destruction of the environment in the pursuit of ‘progress’. The human species cannot go on taking its survival and wellbeing for granted. A pushback can come in cruel, unexpected and mysterious ways. The name of the latest pushback is COVID-19.

Yet, there is a positive side to the corona crisis. In silence and in solitude, massive numbers of women and men all over the world — poor and rich, young and old, in cities and in remote villages, atheists and followers of all religions — have begun listening to their own inner voice, questioning, examining, unlearning, learning, repenting and reforming. We all have become aware that we are all in the same boat, and that the boat is not safe. Hence, there is a common yearning for a better, healthier, more secure and more caring future, which is possible only through unity, solidarity and cooperation. The path ahead, therefore, lies in the activation of this humungous, planet-wide psychic awakening for a civilisational renewal.