Covid-19 Pandemic: Our Insane Levels Of Greed Have Become The Fault In Our Design, Ominously Inviting Upon Ourselves Viral Onslaughts And Epidemics

The Covid-19 pandemic looms large. But how close are we to making the magic vaccine? Does this virus justify the paranoia? Nature is a great experimenter, known to discard species that cannot adapt to its environs and contribute to the “Whole”. I believe that as humans, we have not evolved enough to realise that we can only survive if we harmonise our species’ way of living with life in totality. 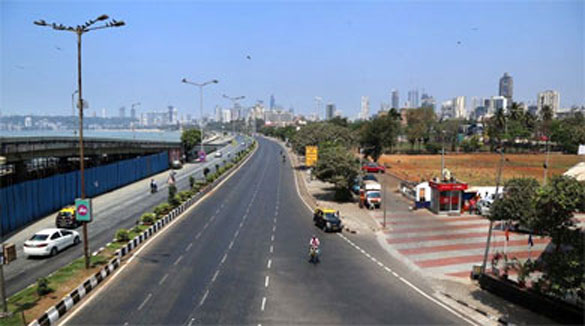 In Mumbai during the Janata Curfew on Sunday. (Express Photo)

Amid the ceaseless pillaging of our planet, is this nature’s way of saying “enough is enough!”?

Anthropocentrism, that pervades human thought and obsession, is the philosophy that homo sapiens are the supreme owners of the planet — the sole commanders of its fate. This human supremacist perspective condones the barbarity of the human race towards every other sentient or non-sentient species, and justifies all wrongs against the planet in the name of ‘development’.

In 1973, the famous scientist, Carl Sagan, viewed it as a form of “human chauvinism”, excluding the possibility of extraterrestrial life. Sagan’s contention was that humans are so restricted by their own narcissism, they find it difficult to even conceive of other life forms with radically different biochemistries. Victor Stenger, a prominent astro-physicist, denounced “carbon chauvinism” — the premise that life necessarily requires carbon. According to him, it was “molecular chauvinism” to assume that molecules are required at all. In an ever-expanding universe, it would be terrible to claim knowledge of everything: It is this “higher intelligence” of the so-called “evolved human species” which seems to now threaten the ecological grid of human society.

The vices of greed and human consumption cannot, evidently, be reined in. And it is perhaps the predestined predicament of human design that works towards its own extinction. As self-indulgent consumers, many of us use, on a daily basis, products which we don’t necessarily need, feeding into a global culture of competitive consumption that makes for unsustainable living habits.

From forest fires to global warming, rising sea levels to deforestation, loss of plant species to animal extinction — one ecological crisis after another that we battle are all linked with our desire to want more, own more, spend, consume and dispose more. All this is much more than Earth can endure. This also renders impossible any positive shift in climate change, any fulfilment of the sustainable development goals and any move towards clean energy economies.

Our commercial greed ravages the biodiversity of the plant world, forcing hybrids and other seed varieties that deplete our soil, reduce water tables and crop cycles — besides creating dependence on chemicals, leading to monocultures in agriculture.

Our livestock are kept in pathetic conditions despite the knowledge that more than 60 per cent of infectious diseases are zoonotic by nature. Whether it is the Nipah virus in South Asia or the closely-related Hendra virus in Australia, or, Lyme disease in the US, there are many examples of how plundering an ecosystem can cause disease and epidemics.

Our conversations at large have to change from “What to buy” to “How to live without buying more”. A big challenge of unbridled consumerism is its consequent waste-creation and disposal. Urban India is the world’s third largest garbage generator and 10 million tonnes of garbage is spewed out, in metropolitan cities like Delhi, Kolkata, Mumbai, Hyderabad, Chennai and Bengaluru.

The world’s consumption of materials has crossed 100 billion tonnes every year, but the proportion that is being recycled is gradually falling. The use of materials by the global economy has quadrupled, far faster than the population, which has doubled since 1970.

Our insane levels of greed have become the fault in our design, ominously inviting upon ourselves viral onslaughts and epidemics. Humanity’s greatest obsessions — religion and science — have offered us a lot, but not enough to go beyond our mortal misgivings.

While religion has contributed to notions of “otherness” within the human race, science has created technology that can obliterate the human species itself. Perhaps it is time to invoke William Blake once more: ‘To see a World in a Grain of Sand/ And a Heaven in a Wild Flower/ Hold Infinity in the palm of your hand/ And Eternity in an hour’.

Shazia Ilmi is a spokesperson of the BJP.

Original Headline:  Covid-19 brings a moment of reckoning with our unbridled consumerism, greed