Mahatma Gandhi’s Embrace of Faith, Social Objectives, and Tolerance Set Him Apart, He Can Never Be Killed, He Will Live On 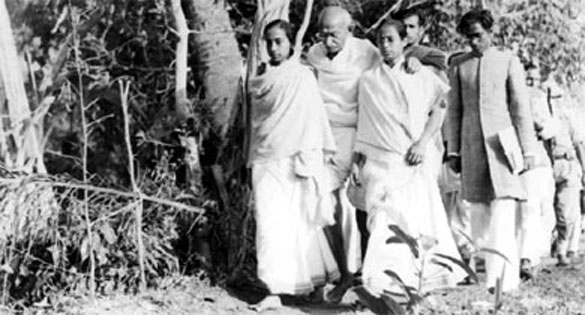 It was well-known that there was no difference between his individual faith and social objectives. The Noakhali episode is a living example of this(Photo: National Gandhi Museum)

What are the major aspects of Mohandas Karamchand Gandhi’s personality? Could we term him a disruptor, to use modern marketing parlance? After he appeared on the scene, both the condition and direction of Indian politics went through enormous changes. It has been more than seven decades since he left us, but Bapu has become a tradition which is reaffirmed and rejuvenated after every conflict or controversy.

Dissenters and protesters around the world have learnt from him. Recently, in Hong Kong, people took to streets against Beijing’s policies. The reason behind this huge protest was an extradition law, which would have allowed individuals from Hong Kong to be extradited and tried in mainland China. This sparked concerns about the erosion of the “one country-two systems” regime in place, and the curtailment of democracy. Despite several threats and pressures, protests continued and Beijing finally bowed down. The seeds of this movement were sown in 2014, when people sought greater freedom. It got global attention. But there was an intriguing question. Why was a government which carried out the Tiananmen square massacre hesitant and restrained this time? It was because of the nature of the movement, which in the words of an academic, drew inspiration from Gandhi and Martin Luther King Jr.

Here, I must narrate a personal incident.

In 1997, the then Prime Minister, Inder Kumar Gujral, was on a visit to three countries. In the initial phase of his visit, he went to Uganda and South Africa. I was a part of his delegation in Uganda, where we had the opportunity to study Gandhi’s initial struggles. In those days, Uganda was ruled by Yoweri K Museveni. He had told us, “I used to follow the principle of an eye for an eye, but since I came to know Gandhi, it feels that his path was more correct. There is nothing better than forgiving those you detest.” After two days, we met the most famous of African Gandhians, Nelson Mandela.

In this constantly changing world, many new thought and moral leaders have emerged but often they have been found to have feet of clay. How is it that an Indian is still so influential many years after his death?

Gandhi was an innovator of resistance movements. He defeated repression, exploitation and hatred, with his commitment to tolerance. Two world wars took place in Gandhi’s life time, and it was almost impossible to follow the principle of forgiveness at a time of when hate flourished. To make the impossible possible was the foremost aspect of Gandhi’s personality.

Bapu knew that the truth cannot be kept hidden. He himself was an open book. Political leaders prefer to stay away from religion and religious ceremonies to prove that they are secular. But Bapu, no matter where he was, never gave up his daily routine of prayers and worship. Gandhi was the nurturer of that Hindu tradition which has the capability of taking everyone in to its fold without any discrimination. It was well-known that there was no difference between his individual faith and social objectives. The Noakhali episode is a living example of this. When guns could not quell the fire of riots there, Gandhi came and sat on a fast unto death. When his condition deteriorated, people from both Hindu and Muslim communities came to him asking for his forgiveness.

Let us now explore Gandhi’s disruption. The elite dominated the politics of the 18th and 19th century. The experiences of South Africa and Champaran had made him understand the importance of public participation. Bapu explained its importance to elite Congressmen of that time. As a result, the All India National Congress started knocking on the doors of ordinary citizens. These people had been exploited for years but they had huge aspirations. These were the people who were held back by many limitations, but they formed India. Gandhi nurtured the repressed soul of India. After that, there was no need for any other mechanism, technique or tool. From here onwards, the world’s largest democracy started taking shape.

Gandhi knew that if truth and non-violence leave the path of understanding and reason, then it will fall into disrepute. This is why he announced the withdrawal of his movement after the Chauri-Chaura incident. Despite the opposition of colleagues in his party, he did this repeatedly because he understood the limitations of people and the power of the ruling class. He did not provide the oppressors an opportunity to oppress. Instead, he was able to soften their attitude through his tolerance and reason. That is why whether it was the leaders of South Africa or the viceroys of India, they all became his admirers. His efforts to win the trust of enemies were unprecedented.

Gandhi, who earned immense respect through transparency, love and equanimity, could not remain untouched with hatred. The same hatred he kept fighting against ultimately took his life. But even 71 years after his death, he remains relevant because he had become an ideology even when he was alive. Ideologies and thoughts don’t die, they can’t be killed. His admirers often say Gandhi hasn’t died, he is still among us.

Original Headline: The man who can never be killed, who will live on