How Can I Forgive You If You Do Not Even Mean It?

After a long day, I hit the sack early and turned my cell phone off to sleep peacefully. Following the usual routine, I checked my mobile the first thing in the morning. I was amazed to see the gazillion text messages that I had received in just one night. 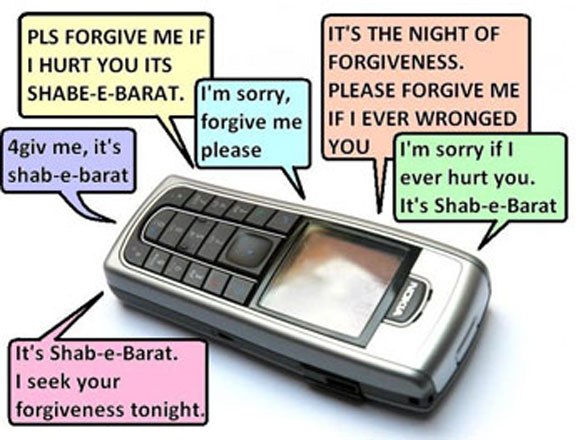 I was all set to read about some juicy news, guessing that maybe a friend had a fight or the exam result was out early. While my mind was still examining other possibilities, I started to read the text messages. The anticipation cooled instantly as I read my colleague’s message that wished me a happy Shab-e-Barat and asked for my forgiveness in case she had ever wronged me.

I have to admit that I was a little surprised to have received this SMS since she and I had a major feud a couple of months ago. Given that she had taken the higher road by asking for my forgiveness, I decided to give her a call. I will spare the readers the details of the most awkward conversation that followed, but I will like to point out that she had no intention of ending the fight and had sent the text message by mistake. She sent it to everyone in her phonebook without realising that I was in the list as well.

After I recovered from my embarrassment and confusion, I resumed the task of scrolling through what looked like an endless list of forwarded messages asking for forgiveness and wishing me Shab-e-Barat Mubarak.. Many of the messages were from people that I don’t even remember the last time I had talked to.

It was when I got the exact same message from a number of people that I began asking myself if these people really meant what they were saying. Did they really want my forgiveness given that they didn’t even bother to write the message themselves?

Even when I logged into Facebook, I noticed that my news feed was flooded with statuses and pictures people had posted dedicated to Shab-e-Barat.  Most of them asked for forgiveness from everyone, for things they had done, intentionally or unintentionally, to hurt others. Some Facebookers even managed to put up conditions like, “share/like if you forgive everyone tonight.”

I simply fail to understand the point of all this. Has this become a social bandwagon or a display of self-righteousness? Text messages may still be a little personal but Facebook mass apologies, seriously?

Isn’t an apology supposed to come from the heart?

How can I forgive you if you don’t even mean it?

Either way, I am positive that most of these apologies hold little or no meaning to the apologisers.

I don’t mean to disrespect the holy event or the gesture of Muslims asking for forgiveness before their fates are sealed; I find it noble, if done in a proper way. But what truly escapes me is how people can contemplate about matters of life and death in just one day, feel frightened that they have messed up badly, ask God and His people for forgiveness and yet forget all about it the moment they wake up the following day.

From what I understand, the gist of the concept is to invoke tolerance in Muslims - tolerance which Muslims are to practise in every sphere of their lives. It can be a simple gesture of giving way to a passing car or it can be exhibition of forbearance when a non-Muslim passes a questionable comment about our religion. I see no point in sending forwarded apologies that nobody really means; or distributing sweets to the equally well off neighbours instead of the poor; or lavishly decorating the cities with lights when the country is facing its worst energy crisis.

Maybe these hollow acts give people satisfaction that they are somehow fulfilling their religious obligations. But if Shab-e-Barat means sending forwarded messages that don’t mean anything, then I, for one, want to spare people the trouble of sending me messages for I forgive you all.