1. Curative powers of camel urine was first emphasised by the Prophet of Islam

2.Camel urine can be used to cure cancer

3. Modern research stresses on the extraction of its biochemic formulation and its use as a medicine. 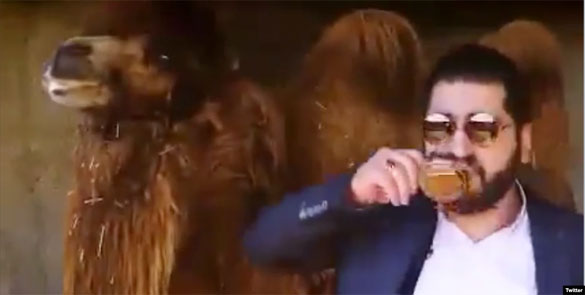 In India, a section of Hindus believe in the curative powers of cow urine. They believe that cow urine cures a number of diseases including cancer. A number of prominent Hindu personalities have admitted that they regularly consumed cow urine to remain healthy or consumed it to be cured of certain diseases. But the Indian scientists have rejected their claims. According to a news report recently, "More than 500 Indian scientists have asked the Indian government to withdraw a call for research proposals on the "uniqueness" of cows and the curative properties of cow urine, dung and milk including potential cancer treatments. In an open letter, the researchers say that the call is 'unscientific' and a misdirection of public money at a time when research in India is already facing a financial crunch."

But in Arab countries, people have believed in the curative powers and medicinal value of camel faeces and urine. They believed and still believe that camel urine cures certain diseases including cancer. The basis of this belief lies in the prophetic medicine (Tibb-e-Nabwi). There are a couple of hadiths which speak about the curative properties of camel urine and milk.

There is another hadith about the same incident in the Sahih Bukhari with some variation.

This hadith is the basis of the belief of the Muslims in the curative powers of urine. Muslims in Arab countries have been using camel urine as a remedy for skin diseases, problems of gums and teeth, stomach pain, tumour, dropsy, diarrhoea, diabetes, jaundice, liver and nail infections ,hair problems and other ailments. In Yemen, it is used for treating various diseases.

But the use of camel urine does not remain confined to shepherds of Arab and Yemen but unlike cow urine, camel urine attracted the attention of Arab and African scientists. They conducted researches on camel urine and faeces and came out with their findings confirming the belief of Arabs and the Muslims that the camel urine did possess curative powers. These research papers were published in various international science magazines and research journals of the US.

For example, the research paper published in the Journal of Alternative and Complementary Medicine (Vol 17 No. 9) comes to the conclusion:

"Camel urine has potent anti-platelet activity against ADP-induced (clopidogrel like) AA-induced(aspirin like) platelet aggregation, neither human nor bovine urine exhibited such properties. These novel results provide the first scientific evidence of the mechanism of the presumed therapeutic properties of camel urine."

"The therapeutic effects of camel urine are known since ancient times and its proved to be antimicrobial natural material and satisfactory for using as a medical treatment in the field of medical therapy. It can be used for treatment of several bacterial infections, especially pseudomonas aeruginosa which account multi drugs resistant bacteria. On the basis of these findings, it is suggested that the camel urine should be manufactured and used for treatment for MDRPA."

Another he research paper on the efficacy of camel urine in treatment of various disease including cancer was published by the American Journal of Pure and Applied Biosciences,. The paper says:

"Camel faeces and urine contain a measurable amount of substances which has been utilised medically against different diseases even in extremely large quantities without causing side effects. But it may lead to dehydration in patients who drink it following thirsty due to its high content of salt."

The dehydration due to camel urine drink is also confirmed by the hadith which tells us that one of the persons felt so thirsty that he wildly licked the dust in desperation.

Secondly the study also shows that camel urine can also be used to cure cancer. Camel faeces significantly retarded the growth of CYP1A1, a cancer activating gene by TCDD at the transcriptional and post transcriptional stages through an AhR-dependent mechanism.

However, the WHO alerted people against drinking camel urine as it ventured to limit the outbreak of MERS in the 90s. About this problem the researchers said,

"MERS is a respiratory illness that is caused by a virus called Middle East Respiratory Syndrome Corona Virus or MERS-CoV and can affect both human and animals. It is believed that MERS originated from animals before it jumped to humans. The evidence available to date suggests that the viruses have been present in bats for sometimes and spread to camels by mid-90s. The virus appears to have spread from animals to humans."

However, the researchers say that "its mechanism of transmission from camels to humans has really not been proven".

Therefore, the study does not encourage directly drinking of urine for medicinal benefits but stresses on the extraction of its bio-chemic formulation and its use as a medicine.

It should be made clear that during the initial period of Islam when medical science was not developed, people used herbs, milk, urine of camel and other similar remedies for ailments. Even today, villagers and herders in Yemen and Arab countries use camel milk, urine and camel faeces as remedy for ailments due to lack of modern medical facilities. Majority of urban and educated Muslims of Arab and other parts of the world avail a number of medical options though they do not deny the curative powers of camel urine recommended by the prophet of Islam.

This article was only an effort to find out if the modern science also corroborated and confirmed the curative powers of camel urine.